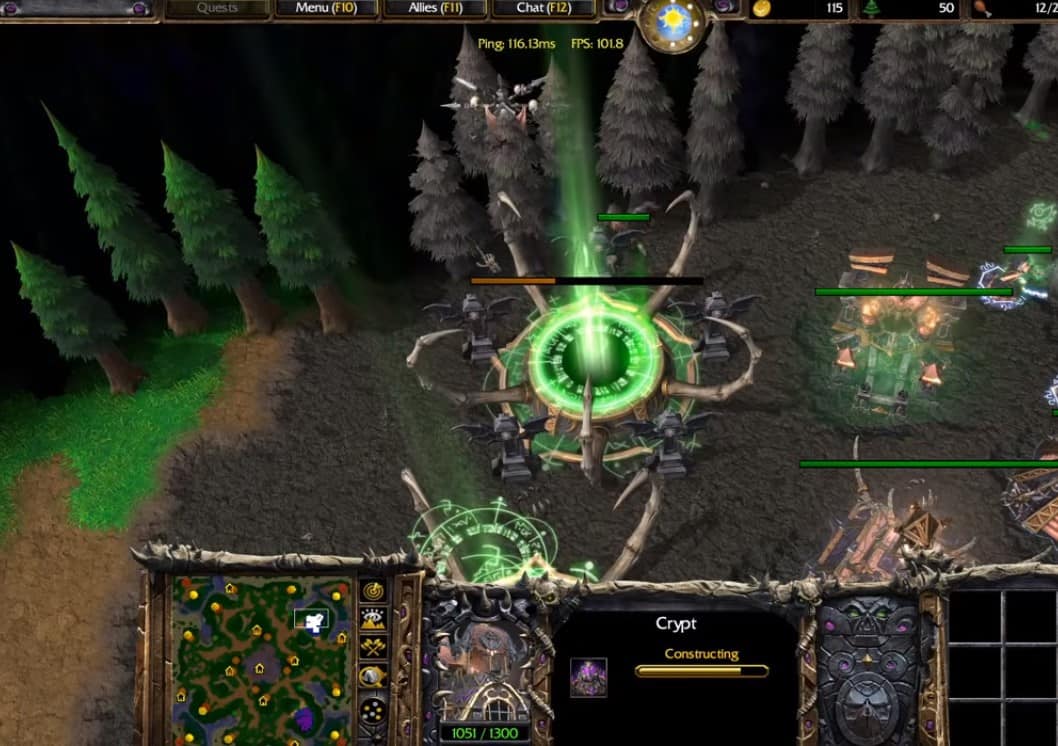 Today we are going to be primarily discussing the Undead Race and how to better your approach against your enemies using the Undead Army. This guide focuses on Warcraft 3 Reforged Undead Build Orders for you to try out for a fast and effective victory.

The following guide discusses two strategies; the first one is based upon spam-making Ghouls in order to overpower your enemies right at the beginning and the second one revolves around making a Lich with an Orb of Corruption.

The Undead are corpses, spirits and men damned for eternity. This race was created by the Burning Legion to terrorize the world. The Undead are ruled by Ner’zhul and the Lich King.

The plague has grown beyond control and more and more mortals fall prey to Ner’zhuls control.

The Undead in Warcraft 3 Reforged use Necromancers to increase their ranks and use elemental powers from the cold North to inflict damage upon their enemies.

The basic principle of the Undead Ghoul rush Strategy is that you are going to be making as many Ghouls as possible in the early-game in order to surprise your enemies with an army of Ghouls and take down their base before they have a chance to properly set up.

This build works best for early-game, and should you happen to prolong the process even by a tad bit; you will very easily get steam-rolled by the opposing enemy as your Ghouls will no longer be able to hold their ground against the much stronger enemies.

It is worth noting that this build is best used against Night Elf, Undead, Human and Orc races.

To kick off this strategy you are going to place 2 of your Acolytes in the gold mine and send the earned gold to the tree and further train one more Acolyte.

Once your third Acolyte is all trained and done; build a Crypt and your first Ziggurat, and send your Acolyte to the Mine. After earning enough gold and various other resources, make a second Ziggurat.

By this time, your Crypt should have finished construction, and this is when the magic happens. From this point on, you will build as many Ghouls as you can whenever you get the chance, this will be the entire backbone of your fight against your enemy.

Now, throughout the process of building your Undead Army, once you have enough money, you are going to want to build the Tomb of Relics, finish up your Altar and train your Death Knight.

After gaining 4 Ghouls and 80 Wood, get the wood to be dropped off at the Lumber and use your Ghouls to scout for the enemy base.

After your Death Knight has finished its training, get the Rod of Necromancy and Blight (Get Blight only if you are facing the Undead) from the Tomb of Relics.

The Rod of Necromancy will allow you to resurrect skeletons of dead enemies; allowing you to use the horde of skeletons to harass and scout the battlefield.

Now, in order to enhance the effectiveness of the Ghouls against enemies, you are going to want to get the Death Coil, and for the rest of the build, you can do whatever you want as you see fit.

But after acquiring all aforementioned items, you are set to fight your opponents in their base.

Make sure to prioritize the Heroes above all, then the Workers and afterwards the Food Supply.

This specific build focuses on you making a Lich with an Orb of Corruption. The sooner you achieve this goal, the easier it will be to devour your enemies. The Orb of Corruption will allow your direct attacks to reduce the enemy’s armor.

You will start the game off by training one Acolyte and sending your Ghoul for gathering wood, and your other Acolyte for training Ghouls.

Now, send one of your initial Acolytes to build your Crypt and Altar. Train one additional Acolyte and then build your first Ziggurat.

Make sure you build the Ziggurat back in the base behind other constructs so as to prevent it from taking direct damage from enemies. After accumulating enough Gold; build your Tomb of Relics in a safe location within the base as well.

When a little time passes, your Altar will have finished, now get your Death Knight out and train two more of your Ghouls, and send them out to collect wood. While you gather more and more resources, build your Graveyard to train a few Crypt Fiends.

In a little while, you will have collected 210 Wood which you will use to upgrade your Necropolis to Halls of the Dead.

Now, rally your Death Knight to the Tomb of Relics, and get the Rod of Necromancy. Build another Ziggurat, and start training an additional Crypt Fiend after acquiring enough resources.

Remember that first Ziggurat you built? Upgrade that to a Nerubian Tower, which will add a slowing effect to all enemies, extremely important for early defense against enemies.

You will now build a Slaughterhouse and train your fourth Crypt Fiend and finally make your Lich.

Once your Slaughterhouse finishes, train an Obsidian Statue; which will provide you with AoE healing and mana replenishment.

By this time, your Black Citadel will have finished completing and your Lich should be all ready. Use the money you have made so far to buy an Orb of Corruption.

Train a second Obsidian Statue if you can at this point. And from here on out, your entire build is set, everything you add is to further affirm your stance.

You can either choose to charge the enemy’s base at this point or continue to reinforce what you have built.