How To Manage Construction In Victoria 3 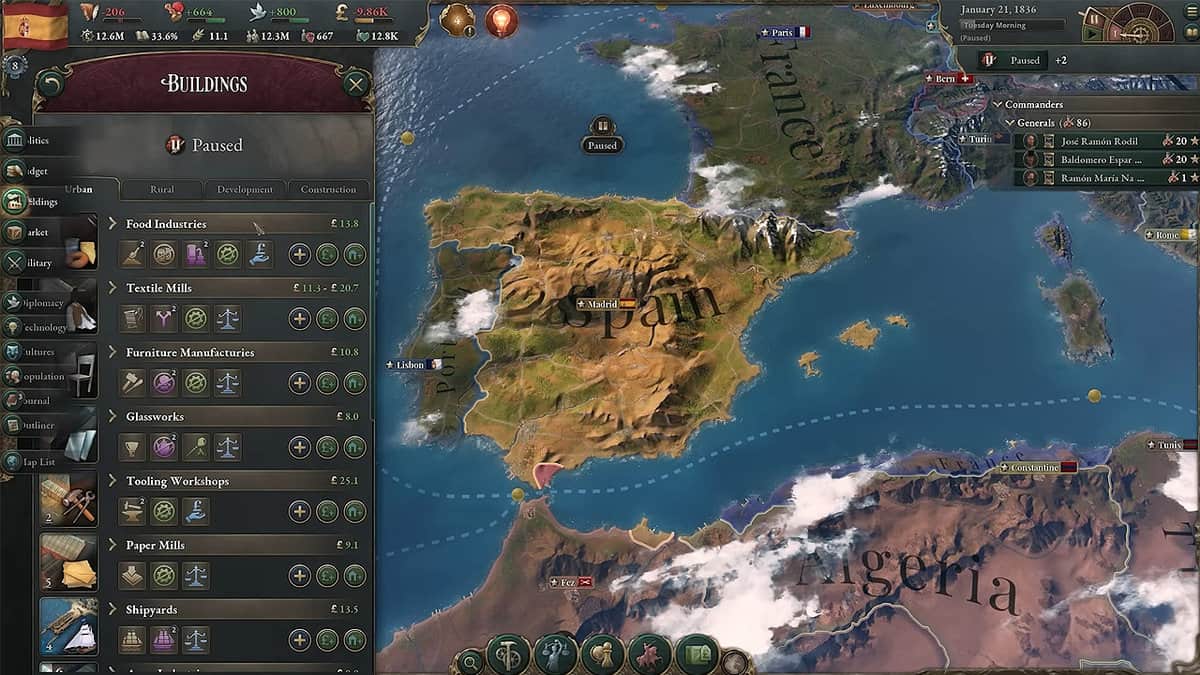 The general progress of your nation in Victoria 3 is determined by your groups of “people with shared interests” (pops). Even though these pops can vary greatly in terms of their interests, they all share one common thing – the construction of buildings to serve as their main centers in Victoria 3.

It’s not an easy task to run a whole nation. There are a lot of factors that contribute to running it smoothly. You need to know the lay of the land and build your buildings to handle the resources they offer effectively. Moreover, you also have to provide workplaces in the form of buildings to give your people opportunities for employment.

If construction is not managed properly in Victoria 3, there are loads of problems your nation would suffer, like overexpansion and debt, and hence a loss of large sums of money, which is the base of a smoothly working nation.

There’s a wide variety of buildings involved when it comes to the progress of your Pops, and they work via a complicated mechanism. Learning to manage the construction of your state is a crucial skill in strategy games like Victoria 3, which is what we’ll be going over in this guide.

Generally, there are three main types of buildings in Victoria 3: Rural, Urban, and Development buildings. There is a large variety of buildings divided further into subsets of these main types, but they will all serve the same purpose one way or the other.

For example, a nation that doesn’t have any natural oil reserves will not be able to build oil rigs. Moreover, each nation has a certain amount of Arable Land to farm. They can only build buildings depending on how much Arable Land they have available.

Urban buildings are basically processing buildings, which take in primary goods (natural resources) to produce refined, everyday-use goods. This results in a good source of income, as these better, expensive goods yield high amounts of money.

Development buildings are a special case, as they don’t play a direct part in making money. These are the main bases of running your country, as they are required for constructing other types of buildings. They also play a role in communications and transport, as they are used for war and moving goods/people across the country.

Let’s look at all the types of Buildings and how they work.

Construction Sectors, as the name implies, are the base for your ability to Construct other types of buildings (construction). A higher construction potential will result in a decreased time in the expansion of construction of your buildings.

Though this might seem like a major prospect, Construction sectors will really put a dent in your economy if not handled wisely, as they are very expensive.

Impact of buildings on farming

Subsistence Farming, on the other hand, is carried out by peasants on Arable Land that remains untouched. Though this might be beneficial for individuals, the process is useless as the profits are negligible on a larger scale. This can be countered and turned into a large profit by using all of your Arable Land to provide employment for the peasants.

Urban Centers become available as your state reaches a certain benchmark of Urban Buildings. As mentioned earlier, Urban Centers are directly related to the extent of Urbanization, where every 100 units of Urbanization will bring forth an expansion in Urban Centers. Though urbanization units can be produced by any building, Urban buildings produce them at a higher ratio.

In this manner, Urbanization, and hence Urban Centers, can be increased/expanded quickly by upgrading the buildings that generate the highest Urbanization units. These are buildings like Power Plants, Government Administration, Electrics Industries, etc.

All the specifics of your Urban Center, like its size, employment, and alterable production methods, can be seen from the bar at the top of the screen.

The Government administration is a unique Urban building. Unlike other buildings, it doesn’t directly produce any goods or resources but contributes only to two main things: Taxation Capacity and Bureaucracy.

Bureaucracy has a great impact on your nation’s economy. It is used in all kinds of stuff like supplying government institutions, maintaining trade routes, and promoting your generals. All of these factors play an important role in generating money and keeping your country on its feet.

These are all the types of buildings in Victoria 3. Now we need to learn when to upgrade them in the best way possible.

Trade Centers work in a similar way to Urban Centers. They are built and expanded automatically depending on the extent of your state’s trade routes but are mostly involved in providing employment opportunities for Pops and contributing to Urbanization rather than making anything directly.

When to expand buildings in Victoria 3?

Generally, it would be best to expand your buildings as they reach the requirements for their Automatic Expansion, which are having market access via infrastructure and cash reserves above 95%.

However, you still have to be wise about which ones to upgrade first. If a building is fully employed and is producing good revenue, that can be upgraded to increase its potential.

If you struggle to get your hands on the raw material required for them, then it might be best not to upgrade them till you do.

There are, however, a few buildings that are always worth it to upgrade regardless of their employment. They are mostly buildings that extract raw materials and make good use of Arable Land.