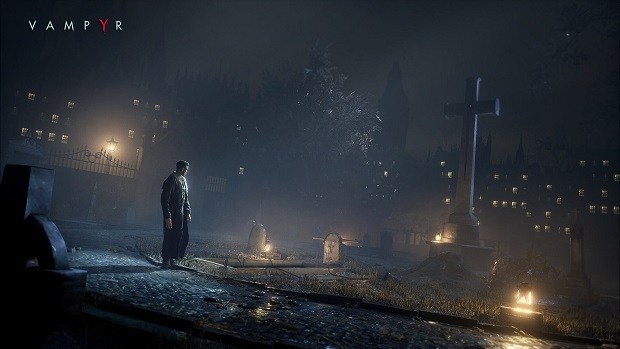 Okay, we get it! You are either a pacifist or a vegan and think Vampyr isn’t for you? Well, you are wrong; you can actually beat the game without sucking blood of the innocent citizens that roam the streets of London. Check out our Vampyr No-Kill Guide for the ‘No-Kill’ walkthrough and for unlocking the ‘Not Even Once’ Achievement/Trophy.

So you have set up a code, some rules that you will follow no matter what. On the other hand, maybe you just want to get hands on the trophy titled ‘Not Even Once’.

Either way, you should be looking forward to a rather tough time where you have to rely on other methods for gaining blood and experience.

Since the game actually encourages you to feed on the citizens to ensure consistent leveling up and for developing skills, choosing a different way will come with its hardships.

Feeding on NPC gives you a huge boost in XP. Some of the NPC can even give a hefty 6000 XP from feeding on them which practically a huge boost to your game. And leveling up is very important in the game as otherwise, you would remain 5-10 level below all your enemies and so the fight will be very painful and challenging for you.

At each point in the game, you will be much below your enemies in difficulty level. This makes the boss fights painfully difficult, but that does not mean it is not possible.

Firstly, let us take a look at what counts towards a ‘Kill’ as far as the achievement is concerned.

What You Should not Do

You cannot, at any cost, embrace a harmless NPC. This includes all of the citizens of London that you can interact or have conversations with. As soon as you see a prompt for ‘Embrace’, apologize to God and be on your way.

Do not suck a citizen’s blood; that is it!

Of course, that doesn’t mean that scripted events in the story like choosing if someone should be healed or not (though curing someone will earn you extra XP), or allowing a transformation to happen, doesn’t affect if the achievement will pop up.

You can carry out any decision which you deem fit, but the decision of ‘Embracing’ NPCs is a no-no. This also does not apply to enemies that you can embrace in the middle of combat.

What You Need To Do?

Again, since you have cut off your main source of gaining blood, you need to look forward to alternative ways. You can check out our leveling up guide for more info.

To summarize, you need to go about your way of completing story missions and side quests to earn decent enough XP. Moreover, taking out both standard and boss enemies will earn you experience points as well.

Survival is the name of the game here; you need to replenish your health as soon as you lose it. For this purpose, always keep the healing skill equipped. Also, never start a boss fight without taking some blood and healing potions with you.

If you want some more defensive measures, use the Blood Shield that is instant but requires a long cooldown time. Blood Shields will absorb hits and push back the enemy a little.

The more you upgrade your shield the more and different types of hits it can render useless.

As we mentioned previously, the achievement criteria do not restrict you from when feeding off of enemies in combat. Therefore, use weapons like mace or stake to stagger the enemy and then proceed to drink their blood.

This will refill both your Blood Meter and stamina bar so you can use powerful Vampiric Skills in battle.

For ranged combat, shotguns, and other pistols that you can find in our Weapons Guide. The shotgun, especially, has a large spread so can deal with multiple enemies quickly.

You can upgrade the weapon to increase its clip capacity and you can buy extra ammunition from merchants.

For a nice little technique in combat, use the Abyss Ultimate to stagger enemies, even bosses, and then continue to deliver hits until you run out of stamina at which point start using your Claw attack that does not require the use of blood meter.

Lastly, if you want to avoid unscripted combat while you roam the streets, you can just use Shadow Veil. This adds to the stealth aspect of the game and will allow you to bypass some type of enemies and avoid combat altogether.

This comes in handy where investigations in difficult regions are considered. Keep the above tips in mind and you will be all set to go when it comes to survival in Vampyr without killing an innocent being.

In order to survive in the game against all the tough and hardened adversaries without your greatest gift for in-game progress i.e. bloodsucking, you need to know how to otherwise keep yourself up to face all that the game has to offer.

Do all of the mentioned above, be patient and persevere to get the Not even Once achievement and to finish your play through as the most Pacifist Vampire in history,

This is all we have in our Vampyr No-Kill Walkthrough Guide. If there is anything else that you would like to add, let us know in the comments section below!