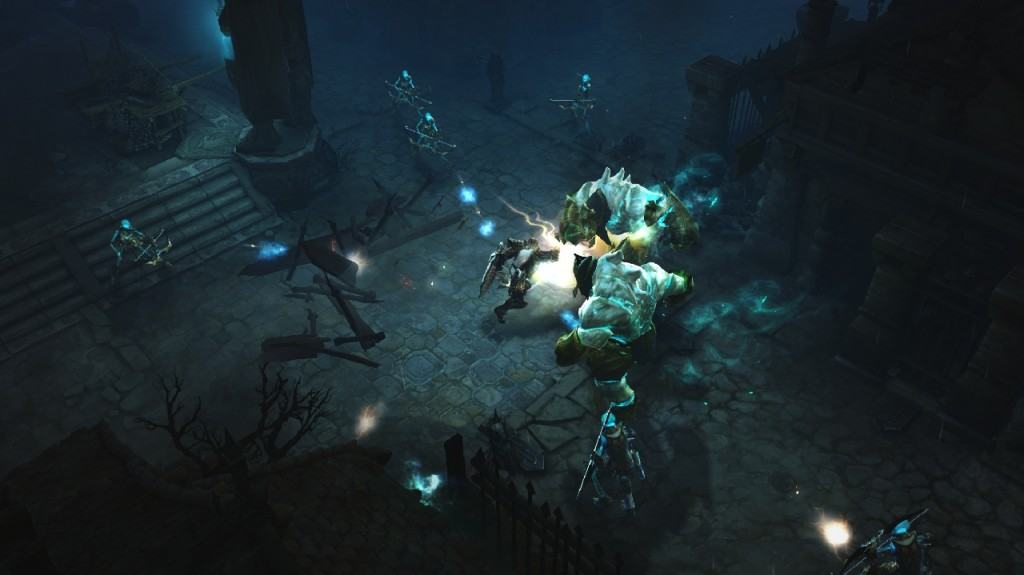 The Auction House is dead, and with it all the overly priced selling and buying items that made slaying monsters of extreme difficulties a redundant task. This means that you have to work hard for earning all good things in Diablo 3, and with the Reaper of Souls expansion, the rewards for the hard-work are quite encouraging.

I remember in my three plays of Diablo 3 prior to the 2.0 patch, I got only one Legendary item, that too with a Barbarian at level 60.

What was that item? A god-awful level 24 Wand that had no benefit to me whatsoever.

Back in that time finding plans for Legendaries was nearly impossible, so I had to sell it on the Auction House for only a few thousand coins, and couldn’t help but curse at the poor mechanics of the game.

This poor rolling of legendary items automatically led people to become dependent on the AH for everything, making the entire philosophy of the game to ‘kill and loot’ entirely pointless. This was the game breaking its own constitution in a manner of speaking, and it needed a lot of fixing.

Patch 2.0 brought the fixes, and the Reaper of Souls expansion has added additional fasteners to make the system work well for just about everyone, and we’re already seeing how Diablo III is yet again fun to play, albeit some concerns.

Legendary Items
Many people prior to the 2.0 patch argued that ‘level 63’ items were better than many of the legendaries found in the game. This has been changed completely, with Legs (short for Legendary) getting a buff and rolling stats that match your level and general requirements.

Farming for Legendary items thus is the single most important thing in Diablo III: Reaper of Souls once you’re done with Act V. The various levels of Torment exponentially increase the difficulty, and most of your pre-expansion characters that were nearly indestructible will feel very mortal at these levels.

For this reason, you need to gear up for the unforgiving creatures that await at these mounting difficulties. It’s only when you can one-shot everything on Torment VI that you’ll be able to claim that you’ve conquered the worst that Blizzard could throw at you.

Understanding Legendary Item Drops
Legendary Items now drop much more often as compared to pre 2.0. Blizzard hasn’t given out the drop-rates statistics, but there is a noticeable increase, making them an assured possibility for nearly everyone spending a good few hours in the game.

The first thing to understand about these drops is that now the stats rolled on these Legendaries will always be according to your level and your character. This means it is nearly impossible to find a legendary Voodoo Mask when playing as a Wizard, or finding a Mighty Weapon while you’re playing as a Monk. Additionally, you won’t find a legendary item that is for level 23 players while you are level 70 or vice versa.

However, this does not mean that every next legendary item that drops is a guaranteed improvement over what you already have. I’ve come across 4-in-a-row legendary amulets, of which the first one was just too good to be replaced by the other three that came after it.

Set Items and Level 70 Legendaries
Once you reach the new Level 70 cap in Reaper of Souls, all your legendary drops will be level 70. This does not mean that you will be exclusively getting legendaries that are listed as level 70 items on the official Diablo 3 website.

Instead, items that are listed at lower levels will also be available with their signature attributes and buffed, and their level requirements pushed to 70. Yes, these items will have stats that match your level.

An example is the Nailbiter Legendary Mace. Although it’s a level 50 Mace, I managed to acquire one at Level 70, with its DPS all the way at 2200, an Attack Speed increase of 6%, and also giving me around 600 Strength and 400 Vitality.

Basically, all the legendaries below level 70 are also available with your level requirement provided you have surpassed their native minimum level requirement (the one listed alongside them on the official website, such as Nailbiter’s level 50 – you won’t get Nailbiter until you are level 50 or above).

Now comes Set Items. It is possible to get the ‘normal’ set items at level 70 with boosted stats as well. However, Blizzard has added a controversial twist when it comes to the level 70 set items available in the expansion pack: you cannot acquire these on any difficulty level below Torment. This is obviously unfair, as many players do not have the gear required to farm Torment even at Level 70.

What Difficulty is Best to Farm Legendaries
This is one of the most asked questions when it comes to farming Legendary gear, and also one of the hardest to answer. You see, Blizzard hasn’t revealed the statistical drop rate values for any kind of item in the game. However, with a bit of self-initiated research, we’ve managed to come across a few numbers that might help:

It seems that difficulties from Normal to Master have almost the same drop rate for legendaries, using Elite kills as standards. We found that the chance to drop a legendary every time you kill an Elite pack or unique Elite monster is on average 1.3% at around Expert and Master.

At Master difficulty, the monsters have around a 512% increased health and 273% increase in damage.

Here’s a list of the difficulty levels, courtesy of Diablo III official guide:

Now, for Normal through Master, the percentage increase in Legendary Farming isn’t increased too much, but at Torment I it becomes roughly 2% from Elite kills, then going all the way to 7% at Torment VI.

However, the difference in difficulty (based on monster health and damage) between Master and Torment is monumental when compared to between Expert and Master. For this reason the amount of Elites you can actually kill off in a unit time becomes substantially lesser in Torment.

Now if you haven’t already managed to acquire some top-end gear from the Auction House days, you’ll have a really tough time staying alive against Elites in Torment (and maybe even Master), making your progress very slow and hence your legendary drops becoming substantially lowered from long kill time.

For this reason, the increase in drop rate for legs and set items is actually nullified in effect. So what’s the optimum way to go about this? I find that the best way to balance a decent drop rate and speed farming is on Expert difficulty.

Why not Master, you say? Well, because in Masters the Elites and Goblins are still a bit tough and time-consuming, whereas anyone with decent gear on Expert can go through them within a very short time-span. Plus, we found the drop-rates on both to be round about the same – around 1.3%, so it’s best to just go with faster farming on Expert.

Once you have acquired enough Legendary Upgrades that you’re doing insane damage and killing everything even on Master with one hit, it’s time to move to Torment I for some great gear, including exclusive set items. Finding that easy too? Move further up incrementally, and keep repeating.

There is something called a Random Number Generator (RNG), which is what controllers what is being rolled (and with what kind of stats) whenever you slay an enemy. This little program is the heart of all the randomized loot generation in all Diablo and World of Warcraft games, and is based totally on luck.

Sometimes it can be so benevolent that you’ll acquire two legendaries in two drops, while at other times you won’t get one for hours.

But Blizzard understands the system all too well to let the latter scenario effect the unfortunate. For this reason, they’ve developed a system to further facilitate RNG, and it’s called the Failsafe Safety Net.

According to developers, on average you should be rolling at least one legendary item every 2 hours. If that’s not happening, after two hours the game will start to take notice that you haven’t rolled a legendary item. If this proceeds for another couple of hours, the Safety Net will kick in.

What this Failsafe system will do is greatly increase the chances of the legendary drop incrementally every hour once it is activated. So if you’re playing on expert with a 1.3% drop chance for a legendary, and haven’t found one for 4 hours, the safety net will boost the drop chance to 2.6%, followed by 5.2%, and so on. A time will come where you will have a 99.9% chance of a legendary drop.

This, according to Blizzard, shouldn’t happen for 99% person of the people playing the game in the first place, but the system is in store for those unfortunate 1% that fail to get 1 legendary every 2 hours.

A lot of people believe that the Safety Net kicks in immediately after the 2 hour developer average time. This is not true, as the Safety Net is supposed to activate after twice the amount of time. This is true even if you have exited the game in between several times, as the counter does not reset after exiting the game, but only after a legendary item (does not include legendary plans and legendary recipes) is dropped.

Basically, with this system, it is nearly impossible to play around more than 14 hours without at least one legendary drop.

However, note that you can’t cheat this system; there are dynamics involved in the system, so you simply cannot be AFK for 8 hours and then kill a few enemies and expect to find a legendary drop. You need to be actively playing and slaying enemies for this to kick in.

Remember, the more enemies you slay and the more chests you loot, the more your chances of benefiting from the revamped drop rates in RNG.

If that’s not working for a few hours, then your chances will greatly increase for every additional hour you play after a few hours of no Legendary worth. Note that legendary Plans and legendary recipes don’t actually count as legendary drops.

If you have any additional questions regarding these concepts and the new system, feel free to ask by posting your queries in the comments below.