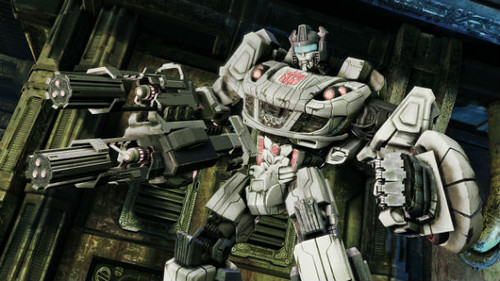 Horde-styled modes are becoming a norm in just about every action game nowadays, and the sad truth is most of them are almost the same. This guide is all about the Transformers: Fall of Cybertron Escalation Mode.

However, Transformers: Fall of Cybertron seems to have taken a slightly different approach to the wave-based mode, which makes it very different and possibly one of the most refined forms of horde multiplayer modes.

Called Escalation, a maximum team of four players are pit against 15 different waves with escalating difficulty. Each map is unique for the bots it offers for play, and what is more unique is the MMORPG-styled roles each character can play.

But know this, robots-in-disguise, that this is no ordinary horde mode – survival in this alone or with a bad team is ridiculously difficult, even on Easy difficulty. Thus, it is essential to have the finest team possible, with each player taking up a key role and knowing good positioning.

General Tips
The best general tip anyone can give you for Escalation mode is to stick to your role throughout, whether you are facing the easiest enemy ever or fighting some fire-breathing electro-mechanical abomination.

The healer should always be protected and in the back, constantly supporting and assisting his/her team. The tank and sentry should be upfront absorbing the damage, and dealing out most of it; their focus is to keep most of the enemies’ attention on them. The ammo supplier should be in a location that allows him/her to reach all players. Thus, a general central location is ideal for such a semi-support player.

Make sure you have good communication, and the Power Core possessor (the ammo supplier) should look to deploy it as much as possible, and also make sure that everyone is aware of it.

When it comes to the maps, try to utilize cover, and also switch your gun arm accordingly. Additionally, for better maneuverability, make sure you use your vehicle form. In addition to swiftness, it also gives you better defenses, so you take less damage. Jet transformers like Starscream and Shockwave are particularly useful, as they can open up space for some air-focused combat.

Try to use your melee whenever you can – it does a good bit of damage, and is super-effective when reloading, as it doesn’t delay the reload time at all.

Spending Credits
You’ll often be tempted to spend credits to buy some health or ammo from the pickup locations, but it’s often a good practice to actually open up as much of the map as possible. Also, try to spend money on the doors that would leave to the weapon upgrade room.

Of course, if you feel you might jeopardize your safety, then choose the safest possible unlocking route. Nevertheless, the simple rule is: unlock map areas first, and then think about other stuff.

Weapon Selection
You’ll come across various weapon pickups in the map, but most of the times the default weapons you have are absolutely fine. If you’ve played through the campaign, you might have developed a good idea of which weapon works best.

Generally, it’s best to save-up for opening the map instead of investing in this stuff, as the defaults are fine. However, weapons with high fire-rates and large inaccuracy can be quite concerning, as they deplete your ammo real fast, so you might want to consider changing those.

Ancients:
You’ll be playing as the Autobots in this map. The Subsonic Repeater weapon here kind of sucks, so you might want to consider getting something else as quickly as possible. However, the initial spawn room is really tiny, and it’s actually best to open up some map space first to prevent your team getting overwhelmed quickly.

Cliffjumper possesses the Flak Shield here, hence being the tank, while Perceptor is the medic. Wheeljack has the Battle Sentry, and Jazz is your ammo-supplier.

You need Gravity Bombs in Ancients. This is why credit management is quite important here. The best way to save is to use all the ammo of all the weapons you have at your disposal before buying more. This is why using subsonic and car mode ammo is highly recommended. Also, try NOT to waste it all.

Keep moving to survive and avoid getting ganged up on. Cliffjumper can make decent jumps and Insections won’t attack you when you’re in air. Use this to your advantage and jump a lot. Make snipers and shotgunners your first priority to kill.

Once with enough credits, quickly open doors as far as upgrade computer. Never upgrade more than once, and buy gravity bombs. Each cost 2000 credits, and a 3 wave recharge time. To make the most efficient use, buy one at wave 12, use it in wave 14 and then again buy in wave 15, making the last 2 waves easier.

Downfall:
Another small initial region, and hence it should be opened quickly. You start off with a really good weapon: the Neutron Assault Rifle, so you shouldn’t worry too much about spending money on anything else but the map.

You play as the Decepticons in this map, with Quake as the tank with the Flak Shield, Onslaught with the Heal Beam, Brawl with the Sentry, and Swindle with the Power Core.

To get through the map, you need to survive the first 6 waves. Downfall takes a lot of credits to open up doors, so you need to make sure you have enough. What you should do is to endure the first 6 waves in the starting area. Ofcourse you’d need to be extremely careful about your health.

This is where Quake’s shield comes in handy. Use the shield to avoid damage, and remember to often transform into the tank, to regain shield and decrease your hit boxes.

Ignition:
This is a really cool map because it has an airstrike console and flame jets that can be activated with credits. However, these are secondary, as your primary focus should always be to open up the map as much as possible first. The Path Blaster weapon is excellent, and there is little to no need of changing it.

You play as the Autobots here. Optimus Prime is the tank, Ratchet is the medic, Bumblebee has the Power Core, and Warpath is the Sentry dude.

The map is huge and should be unlock immediately. Open all doors to keep moving. In the first few waves, get on. The boxes on the floor. The melee decepticons wont be able to hit you, but the crowd allows you to efficiently use truck mode missiles and deal AoE damage. Opening all doors give you and upper and lower area to keep the decepticon on move.

Oblivion:
This is an interior map, and you play as the Decepticons here. The weapon you start off with is the Scatter Blaster, which is quite good.

Megatron is the tank here, Shockwave has the Heal Beam, Soundwave has the Battle Sentry, and Starscream is the ammo supplier.

The key to surviving is movement. Open the doors immediately and make sure you never stay in a single place for long to keep yourself from getting boxed by Autobots. Also, make sure you keep moving to prevent getting shot in the back by shotgunners.

Make small and easy targets your first priority to take down, as they do gang up hard. Machine gunners are slower and easily avoidable so don’t worry about them too much

“Open fifteen Armory Recreators in either Campaign or Escalation”

This one can be a little difficult to execute in Escalation, as you’ll mostly be too busy in fending off waves or recuperating after one. Having said that, it’s not impossible, so you might want to give it a try.

This one is quite self-explanatory and easily achievable if you have a good team and can go through the various maps.