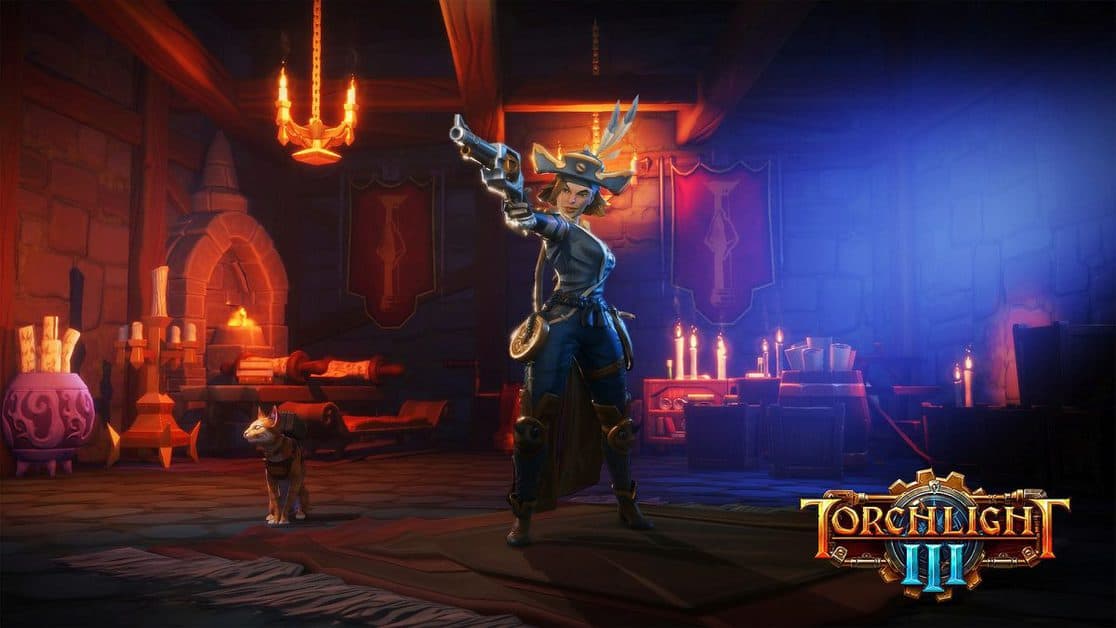 Torchlight 3 has four classes to choose from: Dusk mage, Forged, Railmaster, and Sharpshooter. This Torchlight 3 Best Sharpshooter Builds guide is focused on the different Sharpshooter builds that you can use to unlock the true potential of the long-ranged DPS to help save Novastraia in Torchlight 3

Whatever class you choose, you will have to unlock its true potential by tweaking it’s build into an efficient final product.

Choosing the right relic, mastering the powers, and enhancing abilities are necessary to ensure the best builds.

Every build uses a different relic, which makes that build unique and will let you adopt a particular strategy that goes with it.

Some of the most beneficial builds are explained in this guide as follows.

This essential element of this build is the Cold heart Relic, which helps the Sharpshooter seek help from a number of allies.

This skill’s effective ability is to allow the Sharpshooter to build an army and summon allies to help them in battles.

The core skills or this build are Rizzi Fate, Loyal Shasta, Ice Golem, Goblin Legion. The Rizzi Fate should be leveled to the maximum as it is the most active core skill in this build.

Loyal Shasta distracts the enemies from Sharpshooter, allowing them to cause damage from a distance. The last two skills help in summoning and ranged fights.

Support skills are also required so that the Sharpshooter doesn’t rely solely on their allies; therefore, do equip Basic Attack, Tight Grouping, Ice Shield, Ghost Visage, and Sacrifice to Goose.

Tight grouping will multiply the damage due to the bonus effect.

Ice Shield is a defensive skill that will make the Sharpshooter potentially invulnerable to attacks, and the last skill will increase the damage dealt by friendly units.

The gear to be used in this build could be Steampunk firearms as Sharpshooter will be shooting from a distance.

In this Build, Sharpshooter doesn’t stay back but instead plays in a more upfront aggressive style. They approach enemies and melt them down like leftover summer icecream.

The Electrode Relic allows the Sharpshooter to carry out some crazy attacks, strong enough to destroy bosses in one blow.

The Core skills we have in this build are Scout’s Bone, Targeted Strikes, Reload, Goblin Legion, Loyal Shasta, Curse of Pipi, and Rizzi’s Fate.

In this build, the most used core skill will be targeted strike and reload as these will help Sharpshooter do an immense amount of damage.

Not to forget that Scout’s Bone can be used along with reload to achieve the same objective.

Passive Skills include Lightning Strike, Shocking Burst, and Violent Burst. Maxing out the Lightning Strike will be the most beneficial as it will surely cause more damage and potentially kill with the hits.

Max out the Increasing charge and activate the Deadlier Bolts and Unleashed Energy to get the most out of it. This way, you can easily melt enemies.

As for the gear, any combination of Musketeer Armour, shoulders and hat that increases the chances of critical hits and damage can be used.

As the name suggests, this build is based on two main elements, Targeted Strikes, and Drainage. The relic we will use in this build is the Blood Drinker.

The active core skills that come with this relic are Onslaught, Targeted Strikes, Reload, Loyal Shasta and Sacrifice to Goose.

The main skill to be used here is obviously the targeted strikes and Sacrifice to Goose for better Vulnerability.

Loyal Shasta as any other build will make the taunted enemies take more damage too.

The relic skills that you must max out are Dance of Death and Drain, so use your skill points in these.

Using the Hat, armor, and Boots of the Musketeer with a weapon capable of inflicting physical damage, you will surely end up draining some severe amount of energy from your enemies

Make sure that you use the right weapon with elemental damage that the Bloody Chalice skill can cause. This will be your most used and useful damage-causing skill.