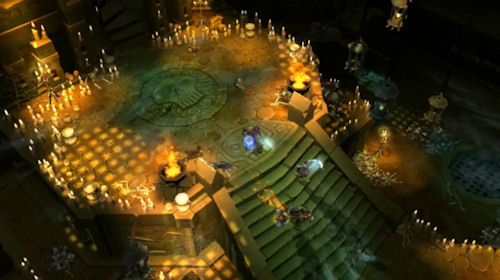 Act 1 –  Widow’s Veil (Robotic Drum)
The first part is found in Widow’s Veil (Crow’s Pass). Light up all the braziers throughout the dungeon to open a secret room which has the Robotic Drum.

Mostly the secret room is located at the back of the sitting Finnas, near the Red Portal. But if it’s not present there, then you’ll find it on your way towards the dungeon.

Act 2 – Tower of the Moon (Robotic Arm)
The second part is found in the Tower of Moon; which is inside Ossean Wastes. Hit all 4 wall-mounted brass gongs in the dungeon to open a secret room which has the Robotic Arm.

Act 2 – Blood Hive (Robotic Pipe)
Robotic Pipe can be found in Blood Hive. Simply visit the Salt Barrens and you’ll find Blood Hive inside the Swarm Point. You need to crush all the eggs found on the last floor of the dungeon to get the third part.

Cacklespit’s Brew
All you have to do is find a Bell in the Rot Gardens area of the Blightbogs and hang it on a post. The post can be found in Blightbogs, on a platform. Once you’ve hanged the bell, start a conversation with Cacklespit to complete the quest.

Fade’s Passage
Now for the next quest, visit Imperial Camp. Once there, talk to Widget and start Fade’s passage. Head towards the western side of Sundered Battlefield and activate two altars on the hill.

After activation, Fade will appear. Speak to Fade and complete the quest.

Before “Fade’s Passage” ends, you’re given a quest by fade called the Cacklespit’s Realm in which you’ll have to find four skulls in the Sundered Battlefield. Finding them is not as difficult as it sounds.

After finding all four skulls, return to fade and hand the skulls to him. Now you’ll receive a transportation that will directly lead you to Cacklespit’s Realm.

Keep in mind that once you’re on the boss island, you can’t visit other islands without returning to Fade

Returning the Parts
Take all the parts to Zeryphesh in Act 2 and he’ll construct Trillbot-4000. Speak with him to unlock new and difficult dungeon.