Tiny Tina’s Wonderlands is the latest entry in the looter-shooter genre by developer Gearbox. It follows the foundations and mechanics of the Borderlands series in many ways. That turns out to be a double-edged sword for the game, and I’ll be explaining my thoughts based on the 32 hours I’ve spent in the game throughout my review.

Tiny Tina’s crazy DnD storytelling was first introduced in a DLC for Borderlands 2 called Tiny Tina’s Assault on Dragon Keep, and both the character and the content offered in the DLC were well-received. This game picks up directly after that and continues with Tina’s shenanigans as she plays Bunkers and Badasses (which is basically Dungeons and Dragons) with her friends. Tina acts as the Bunker Master and calls the shots for whatever goes in her Bunker. This tabletop element adds even more silliness to the game as Tina tends to change the rules and settings of an area based on the input of her friends or her mood, allowing for some funny and interesting turn of events. 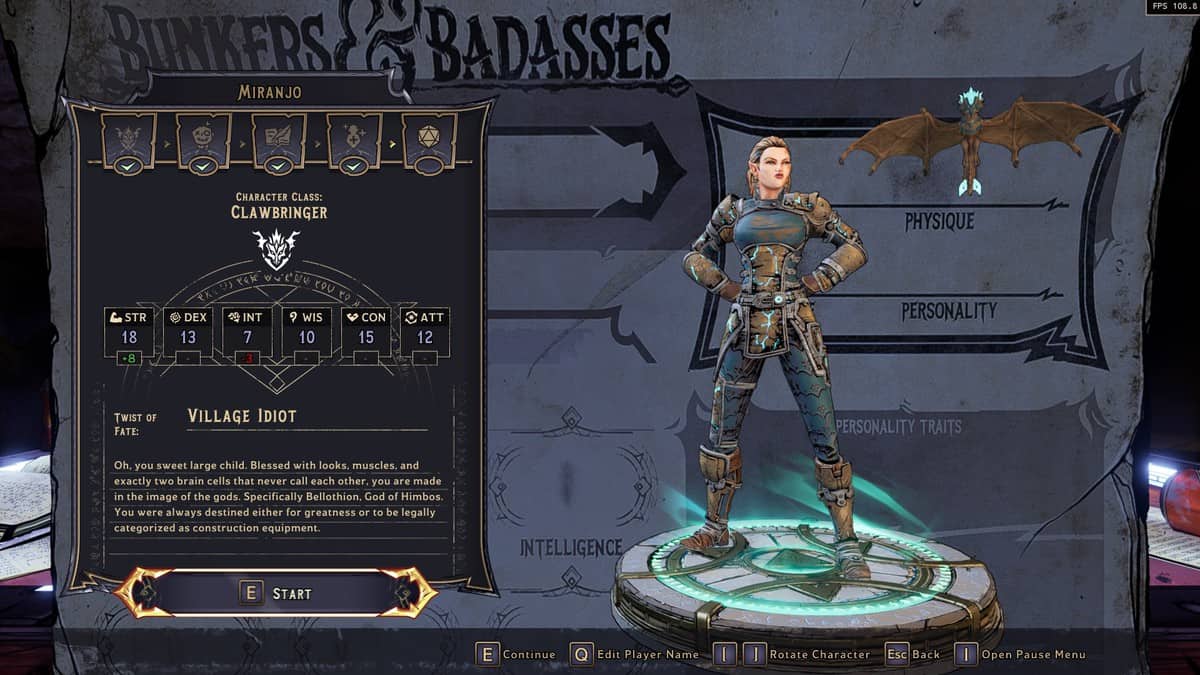 As you start the game, the very first thing you need to do is create a character, choose what backstory your character will have, and then pick one of six diverse classes that each focus on a different playstyle while maintaining the fairy tale vibe of the game. I went with the Clawbringer class as my primary class. As you play through the game, eventually, you’ll unlock the option to choose another class.

This allows you to create builds with excellent synergy; for example, a Clawbringer character paired with the Graveborn Class as the second class becomes excellent for players who want to play up-close and personal, inflicting tons of melee and elemental damage. You can even respec any points you’ve spent within the class skill tree if you think you’ve made a mistake.

If you’ve ever played a Borderlands game, you’ll have no problem getting used to TTW’s rhythm, as it is essentially the same. The game uses a lot of weapons, weapon manufacturers, animations, and overall shooting mechanics from its predecessors, which is sort of a letdown, and I could only spot a handful of new additions to the game. Most of it is just reskinned to fit the aesthetic of the game.

The gameplay loop revolves around shooting and looting everything in sight as you move on to the next corridor of enemies, where you do the same thing again. If that is something that doesn’t intrigue you, then this game might annoy you very quickly. It started to get repetitive and very boring towards the latter part of the game because it doesn’t allow you to be overpowered at any point and the enemies in all areas scale based on your level. You will always face bullet spongey enemies and will never feel as if you have good guns or that you’ve spent a lot of time leveling up your characters. 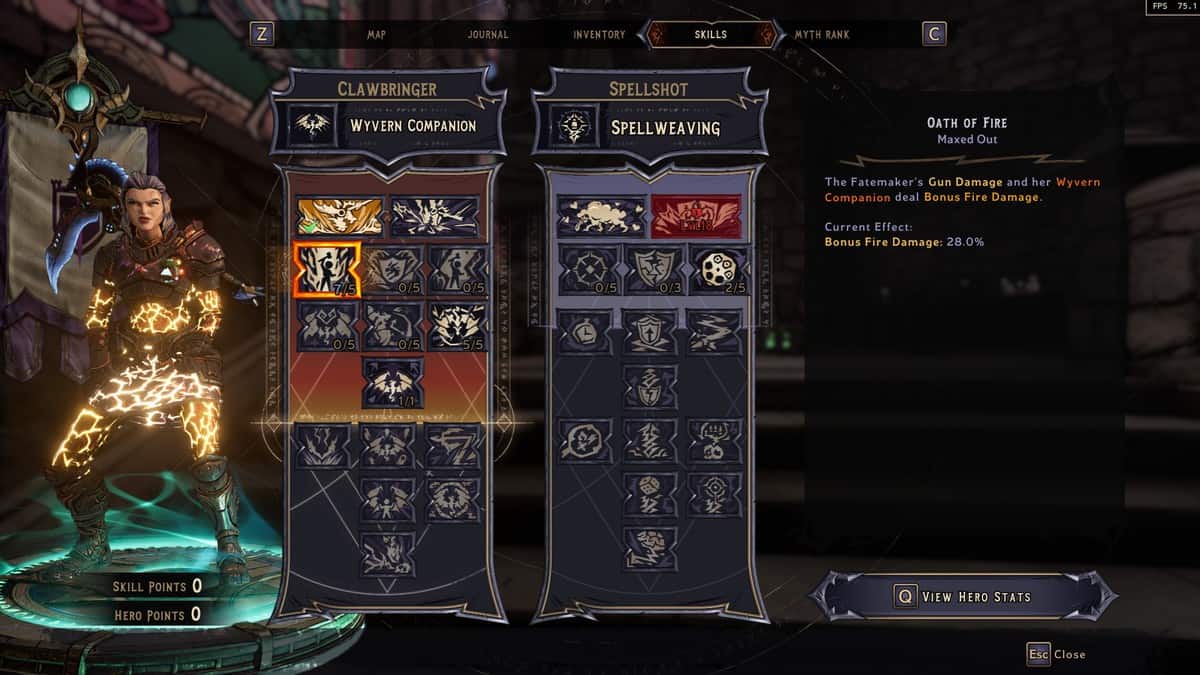 The loot on offer after you are done with your carnage is average at best. The drops you get have a lot of RNG to them, which makes it difficult to make a good build unless you get lucky and find the right drop.

Grenades have been replaced with a wide variety of spells which the player can choose based on their playstyle and preference. These spells range from fireballs to ice spikes and even fire-breathing dragons that chase your target. You’ll feel welcomed if you love to play as a spell-caster or mage in such games. My build mostly revolved around melee and elemental damage, and even that had a lot of variations and styles to it.

The Story follows Tina as she and her friends as they try to defeat the vicious Dragon Lord and restore peace in the Bunker. The Story itself is bleak, forgettable, and average at best. Still, thankfully, the colorful cast of characters you meet along the way and the varied, vibrant, and interesting locations you’ll visit make up for the lackluster plot and provide some really funny and enjoyable moments. 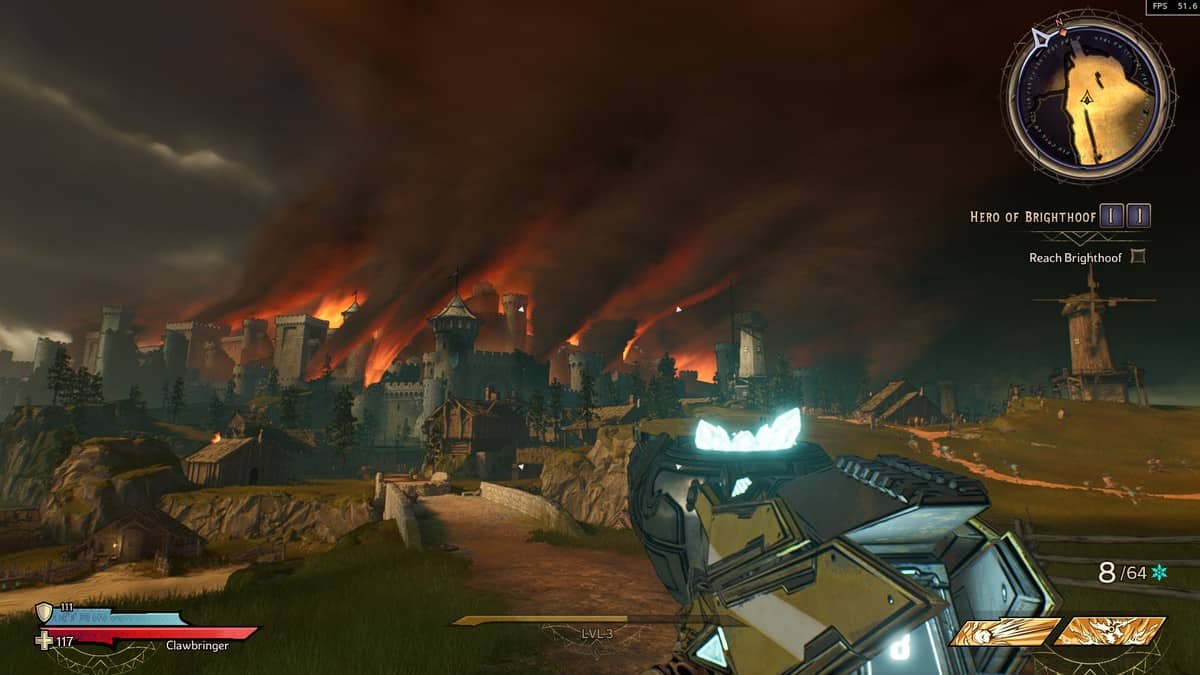 Another key factor in holding the game together even without a compelling story is the strong performances by all voice actors who have voiced the main cast of characters. My favorite was Ashley Burch as Tiny Tina and Will Arnett as Dragon Lord. Wanda Sykes and Andy Samberg play their roles as Frette & Captain Valentine to perfection. Thankfully, the jokes and dialogues this time around are not as bad as they were in Borderlands 3. The main villain, Dragon Lord, is also way more interesting and quirky than the Calypso Twins from BL3.

The main campaign will take you anywhere between 18-24 hours to beat, but there are a lot of side quests to do, shrines to loot, and other NPCs to interact with and do quests for. Just don’t expect the rewards for these activities to be super exciting because, as I’ve mentioned before, the loot on offer is average at best. These side activities help you play catch up with the recommended level of your main quest to make the enemies you face in that quest less bullet spongey.

Tiny Tina’s Wonderlands is not built from the ground up with something new to offer, and it is rather a reskin of the Borderlands series with a few neat tricks up its sleeves and a whole lot of vibrance and funkiness. This becomes apparent after the first few hours you spend with the game. Almost all quests have you doing the same thing; talk to the quest giver, go to a location marked on the map, blast everything in your way to smithereens and collect or interact with an item at the end. I, for one, am not a fan of doing just that for 20 hours straight. Some people enjoy this loop, and they’ll feel right at home.

The NPCs you meet during these quests are all related to classic fairy tales with Tina’s quirky twist on them. You’ll meet a guy called Fairy PunchFather who can sense evil due to his connections to the fairy world and then proceeds to punch everything to restore peace in the region. 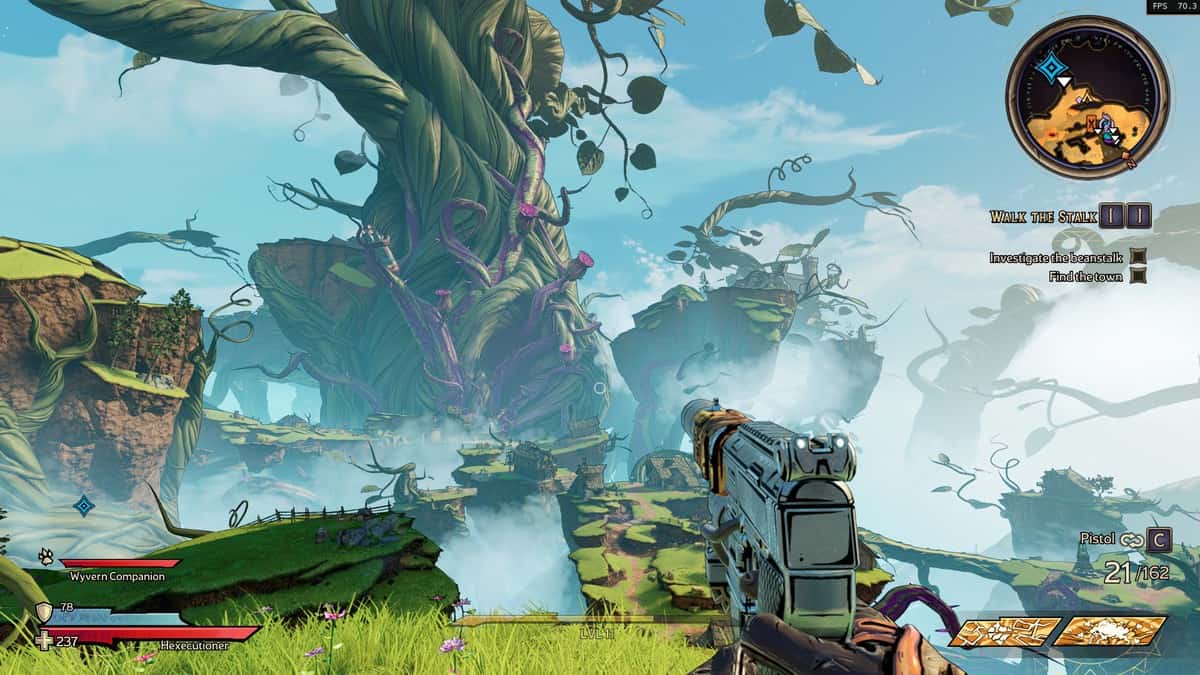 Tiny Tina’s Wonderlands has some interesting locations to visit, including a beach being invaded by a skeleton army, a giant beanstalk town, a mountain filled with gnomes and trolls, and dried seabeds where sharks are called dogs. Things start getting messy for Tiny Tina’s Wonderlands when you look at some of the game’s outdated mechanics like the quest design, UI, PC controls, bugs, and how the map behaves.

Even corridor shooters like Call of Duty have started innovating a bit in their recent titles and try to change things up in the campaign missions. The levels allow you to explore more and find shortcuts, but that doesn’t exist here in TTW. If you see an item on a platform in the distance and the only way to get there is by running across the level, you don’t have any way of unlocking a shortcut on your way back, which makes exploration very tedious and not worthwhile.

The different locations in Tiny Tina’s Wonderlands are interconnected by a Board-game styled hub called the Overworld. It is one of the good additions to the game. It allows you to navigate a tabletop area where you can unlock shortcuts to reach other parts quickly, access shrines that contain loot, NPCs, side quests, and other fun puzzles. In one instance, you will find a bean just laying on the ground, and it’ll tell you to plant it somewhere. Once you do that, a whole new area will open up for exploration.

The Overworld is also filled with random enemy encounters that pull you out of the tabletop view and force you to kill a few enemies, loot a few chests, and then go back to the Overworld. This unnecessarily slows the game’s progress when it was not needed at all. You can dodge these encounters by meleeing the approaching enemies before they touch you.

TTW uses the same decade-old outdated and annoying layered main map as the borderland series. I tried using it in the early hours and then just completely gave up on it because of how confusing and irritating to use it was. The map is not the only frustration you’ll be facing here. The quest log did not work for me as well. It wouldn’t track anything, and I was just left with a useless, blank page. 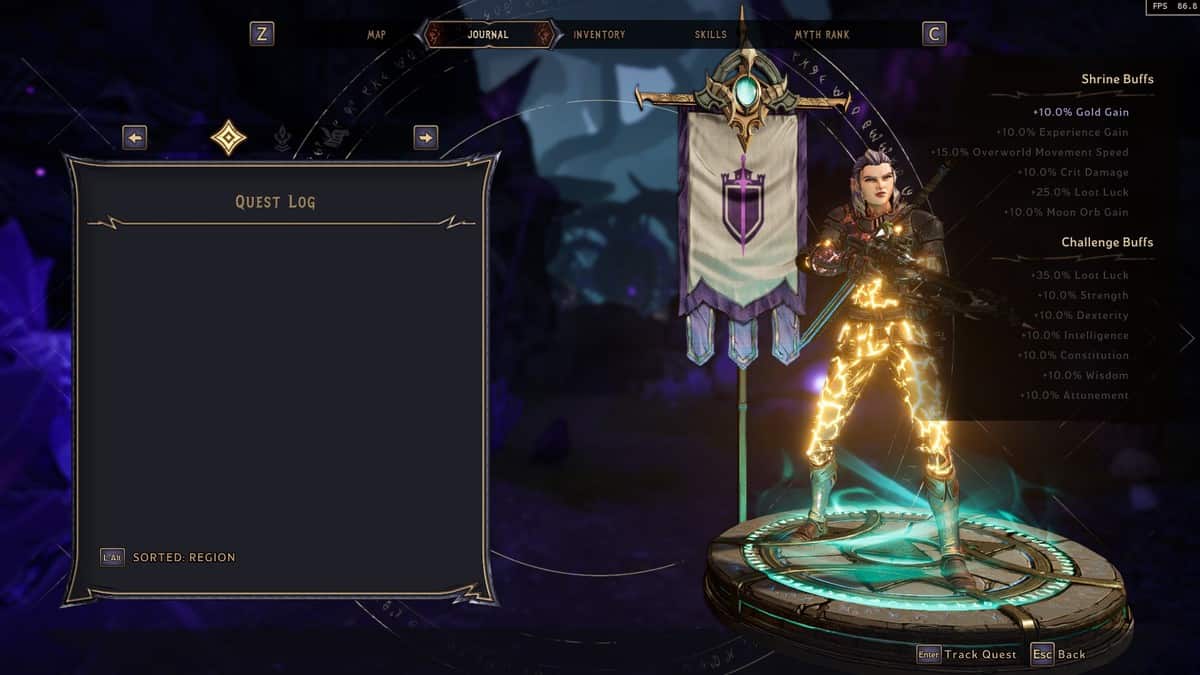 I played Tiny Tina’s Wonderlands on PC. It’s safe to say that the game requires a few big updates before the PC port is polished enough because on launch, it is riddled with UI bugs, mouse sensitivity issues that prevent you from playing with sniper rifles because of how bad your sensitivity will be and most of the sliders in the options don’t work with mouse controls. These issues are easily fixable, but we have yet to receive a hotfix for these issues at the time of writing this review. Stability-wise, it never crashed for me once in my 32 hours with the game, and it was running around 70-90 fps with maxed-out graphics @1080p on an RTX 2070.

Once you put all of these technical things aside and start playing the game for what it is, there’s fun to be had here and some good laughs. The Borderlands signature combat style remains the same here, and it’s as fluid as it was in BL3. You can zap around the room and annihilate enemies with spells, melee weapons, or just…guns.

The level cap in Tiny Tina’s Wonderlands is 40, and once you hit that, a new type of progression unlocks for you. This is called Myth Ranks, similar to the Badass Rank System from previous Borderlands games. A new progression bar appears on your screen, and whenever that bar fills with XP, you’ll gain a Myth Point that you can invest in different constellations to gain buffs based on your playstyle. There are 4 constellations, and each focuses on different kinds of buffs ranging from melee damage buffs to elemental damage buffs. 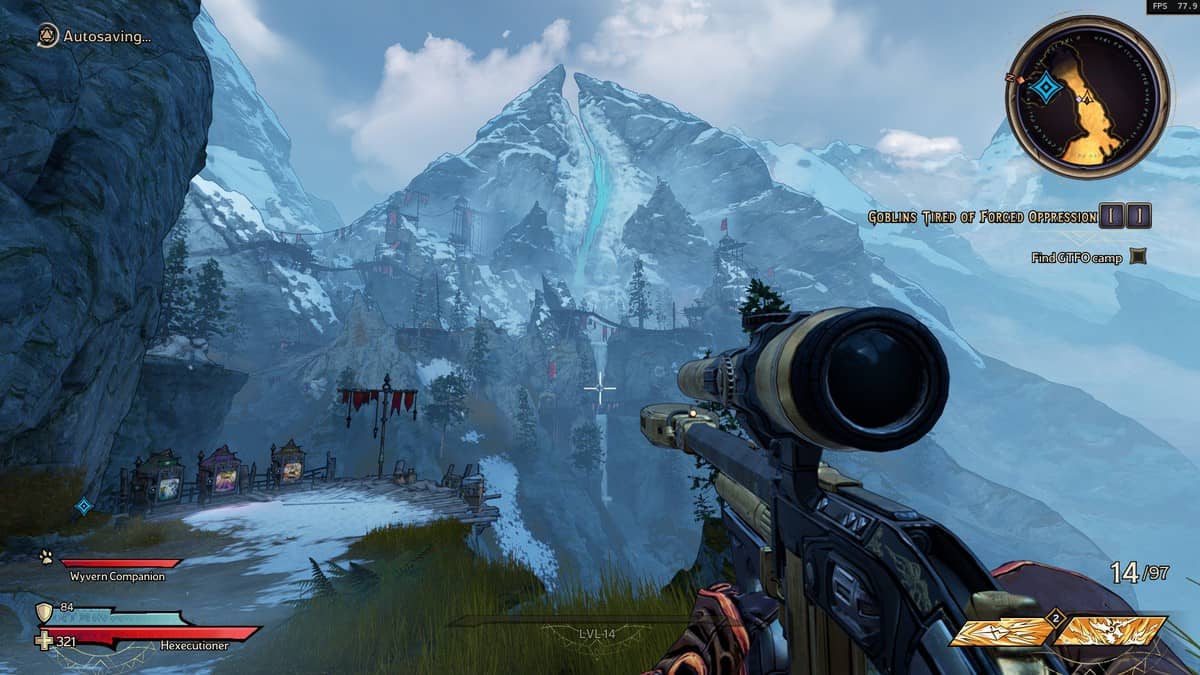 Tiny Tina’s Wonderlands also offers an end-game activity called the Chaos Chambers, which unlocks once you defeat the game’s final boss and go through the credits. These are modified runs through randomly generated levels where you fight different enemy types across multiple levels and then face off against bosses. This mode is great for players who want to keep playing the game and grind for epic loot.

Chaos Chambers can be further tweaked by applying restrictions (Curses) on yourself like reduced damage infliction, more damage taken, increased damage from elemental attacks, etc. You can also choose to grind for a certain type of loot to maximize the efficiency of your grind. Gearbox has confirmed that they’ll be releasing 4 DLCs for Tiny Tina’s Wonderlands that will come as season passes with new quests, loot, and locations to visit. This makes it worthwhile to level up your character by grinding Chaos Chamber runs and preparing for the upcoming content.

Tiny Tina’s Wonderlands is not perfect and requires some polish, especially on the PC port, but it delivers what Gearbox essentially wanted from Borderlands 3. Still, I believe another game with the same foundation will not be well received because of the aging quest structure & level design and the bad UI choices, which are visible this time around

Tiny Tina's Wonderlands is a fun addition to the Borderlands franchise with an excellent cast of characters, vibrant locations, and cheesy jokes that work most of the time but the aging formula, lack of innovation in the gameplay loop & boring quest design hold it back.