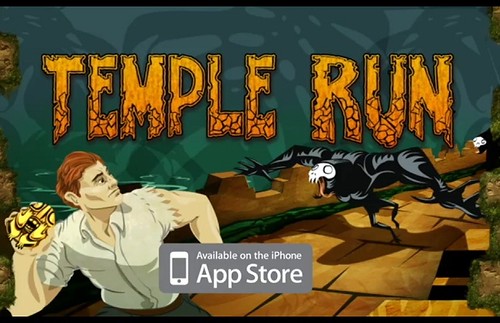 In Temple Run, you control a treasure hunter who is being chased by a couple of monkeys. You must avoid the on-coming obstacles and escape the temple safely. If you are new to the game and having difficulties playing through different levels, you can read our Temple Run Tips.

The developers have already made a tutorial in the game. You should go through it once as it is pretty much detailed and you can learn a lot from it. Open the options menu and enable tutorial.

When you’re going through the trailer it will tell you to either slide or jump from an obstacle, this is not true. Some of the obstacles can be avoided by both – the jump and by sliding so you may choose what’s best for you. Don’t fall for money, sometimes when you tilt for collecting up more money/coins it can result in a failure. Be careful, sometimes there is no side-wall and you can fall.

Coin Powerups
These will increase the number of coins which you get by collecting them. Re-collecting them will add more to the increased amount.

Coin Magnet
It will make you act as a magnet, you will automatically collect the near-by coins without any effort. Recollecting them will increase the duration.

Invisibility (Invincible)
Such a coin will make you invincible, you won’t fall of the blank spaces…more like you’ll start flying. You will have to worry about the turns though. Recollecting them will increase the duration.

250m Boost Power up
If you collect them then your running speed will be increased. You should only collect this if you have a proper hold on to the game because this way it’s harder to collect the coins and jump over the obstacles/gaps. Recollecting them will increase the duration.

Doubling Value
These coins will simply double the value of some coins. It’s very profitable and a nice thing to collect.

Real Money investment
If you cannot afford to grab so many coins but can afford some real money then you can trade some dollars for the in-game coins.

Achievements
Here is a list of all the achievements which can be unlocked/achieved by performing a particular set of activities.

Don’t forget to share your own insight about the game in the comments below!