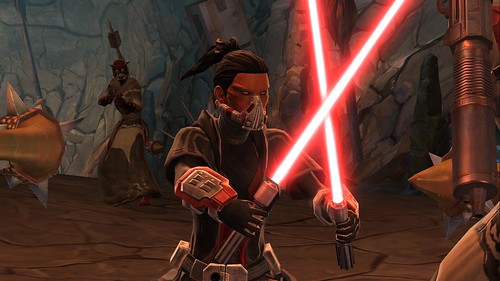 Star Wars: The Old Republic can become both a source of ecstasy and a source of complete confusion, as its massive world and huge character enhancement system requires a great amount of research and understanding, which can become rather overwhelming if done by yourself. To explain the Marauder class, we made this SWTOR Sith Marauder Build guide.

You will have no difficulty in choosing your favorite class and play-style with the description given in the game, but when it comes to building your character, it is a whole different story.

For more help on Star Wars: The Old Republic, read our Datacron Locations, Crafting Guide and PVP Guide. But first, let me explain the basics, which apply to all classes:

Defensive Roll: 30% reduction to AOE damage taken and 3% reduction to internal and elemental damage. This is a great pick because it improves your endurance during combat.

Inexorable: If you’re left stunned or otherwise disoriented, you will be granted 4 Rage and Unleash’s cooldown will be reduced by 30 seconds.  This is particularly useful during both PvP and PvE battles since the reduced stun time can be make the difference between life and death.

Interceptor: Force Charge and Obliterate reduce target movement speed by 50% for 6 seconds so that you can take them down much more easily. This is particularly useful for PvP.

Path Carver: 25% damage boost to Sweeping Slash which allows you to do AOE damage in PvE battles.

Expunging Camouflage: We strongly recommend this one for PvE fights. It causes Force Camouflage to get rid of all cleansable effects so that you can handle yourself during boss fights better.

Phantom: This grants a 15% boost to your movement speed along with 20% bonus to movement speed of Force Camouflage which will last 2 extra seconds. During PvP situations, you will need keep some distance between yourself and your enemies in order to better strategize your attack. This will help greatly with that

Relentless: 30 second cooldown for Predation which now does not consume any Fury. This movement boost will be greatly helpful during boss fights as well as during PvP battles.

Undying: Undying Rage will now last an extra 2 seconds and have a 30 second reduction to its cooldown time. You can do a lot with this extended time.

Blood Ward: You can resist stuns when Saber Ward is activated for 6 seconds.  Getting attack in this state will recover 3% of your maximum health once per second. This is a must have for PVP.

Through Victory: You can use Mad Dash to remove any movement stopping effects that are on you. Mad dash also ends up dealing 50% more damage with a reduced cooldown. This is useful against Dread Guards, and in PvP situations.

There is no one right combination of these utilities. The build you go with is entirely up to you and you should decide it based on what each battle requires.