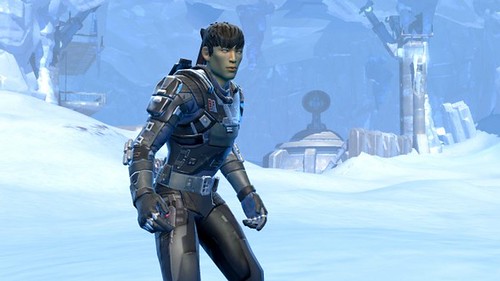 Imperial Agents are the right-hand of the empire when it comes to select missions. They are very precise and are able to get the intel needed without getting noticed. It’s no-brainer that you would need to understand their role before you play an Imperial Agent, be it Sniper or Operative and this SWTOR Operative Build guide will help.

I’ll be explaining the specializations of the Imperial Operative in this guide, focusing on the Skill Tree and build.

Nanotech Suit: Decreases 30% area of effect damage received. Highly recommended for PvE and PvP, against teams or players who receive a great amount of AOE damage.

Recommended (PvP) / Situational (PvE)
Slip Away: Decrease 15 seconds from the cooldown of Debilitate and helps in controlling your opponent’s actions.

Useful (PvE) / Situational (PvP)
Imperial Weaponry: 25% additional damage dealt by Noxious Knives. Mostly it can be used if the enemy’s group either has melee or they’re lured side by side by the player and deal the AOE damage. However, because of push backs, it’s quite difficult to manage as it can make it useless. When stacked up, PvE can possibly kill adds.

Situational (PvP) / Useless (PvE)
Hit and Run: 50% of your movement speed is added for 3 seconds, after striking the opponent with Veiled Strike or Shiv as it provides you with the Hit and Run. It also helps in benefiting the versus players with kiting habits.

Precision instruments: Decreases 5% energy cost of Debilitate and sets up the Sever Tendon as the target for 2 seconds.  Mostly it’s used for the opponents that want to escape in order to heal back to max or LoS for avoiding any further damage.

Curbing Strategies: The movement speed of the targets is decreased by 40% for 6 seconds by Noxious Knives and Overload Shot. Also, Flash Bang drops Flash Powder which decreases the precision of the target by 20% for 8 seconds.

Almost Useless (PvP) / Useless (PvE)
Infiltrator: Adds 15% movement speed and increases the effective health level by 3. This utility can only come handy in guarding cap points for distracting the guarding player and stealing.

Recommended (PvP and PvE)
Med Shield: 5% of your max health is needed to get healed by your Shield Prob, after it collapses.
Aside from mitigating damage, you’re given immediate healing after it’s usage.

Recommended (PvE) / Useful (PvP)
Advanced Cloaking: Decreases 30 seconds from the cooldown of Cloaking Screen and increases the movement speed of activating Cloaking Screen by 50% for 6 seconds.

Recommended (PvP) / Useful or Situational (PvE)
Fortified Kolto: 3% of your damage reduction is increased per stack when your Kolto Probe is active. This utility offers Bonus Damage Reduction and there’s a slight possibility that it can even be useful in PvE.

Cunning Competencies: When activated, Countermeasures purges every movement-impairing effect. Also, after the Sleep Dart is used, Sedatives strike the target and decrease 50% of all the damage dealt for the 10 seconds. This utility helps you against all movement debuff/root. Also, it enables the player to burst and stack the heals and defenses before receiving damage.

Recommended or Useful (PvE) / Useless (PvP)
Endorphin Rush: Adrenaline Probe restores +15 energy. Selecting this utility as the energy management is not necessarily due to it being easy even after the nerf.

Useless (PvP and PvE)
Imperial Tactics: Tactical Advantage in now granted by Sever Tendon which is useless for lethality. Also, the rotation itself doesn’t recommended the users to use this ability.

Jarring Strike: The opponent is knocked down for 3 seconds by Backstab and Lethal Strike when used from stealth. But instead of getting knocked down, opponents are immobilized for 3 seconds.

Recommended (PvE and PvP)
Evasive Imperative: 3 seconds of your active cooldown’s Evasion is reduced when you get attacked. Note that this effect can’t take place more than once every 1.5 seconds.

Revitalizers: Revitalizers are being distributed by Stim Boost that restore 5% overall health every 3 seconds. Heals health up to 25%. Also, reduces 20% received damage for the time period.

Recommended (PvE) / Situational (PvP)
Circumvention: Decreases Holo-traverse’s cooldown by 10 seconds and enables it to get used when still immobilized. It provides a Tactical Advantage once activated and requires good sense to function properly.

Augmented Shields: Increases 30% of the damaged taken by the Shield Probe. It’s useless because it should’ve been in a Lower Tier instead of being in the Heroic Tier.