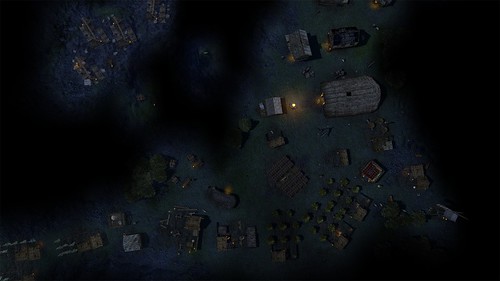 Think castle building and the first name that comes to your mind should be Stronghold. Stronghold series is making its come back with Stronghold 3; which is exciting in many ways.

Stronghold 3 improves on the foundation that made the series popular with the fans and introduces gameplay changes opening range of possibilities and ways you can play the game, enhancing the overall castle building experience.

We are excited about the game and we got even more excited when we got the chance to ask Lead Designer Simon Bradbury few important questions about the game and its new direction. He was kind enough to answer all our questions, concerns and even gave us a hot new update. Read the rest in the interview below:

Simon Bradbury: Stronghold has always had quite a lot of gameplay contained within it and with Stronghold 3 we are not looking to redefine what Stronghold is. Rather we want to take the best of the previous 2 games and make the perfect Stronghold title. We will be adding in many changes and new ideas but the core game play will be as strong as the original.

All the changes we make will be elegant extensions of what made the original popular. So nighttime sieges for example – add a tense and dramatic twist to gameplay, rather than redefining the game. The new house building system on the other hand is perhaps less grandiose, but instead simply extends an area of the game that we didn’t do much with in the original. 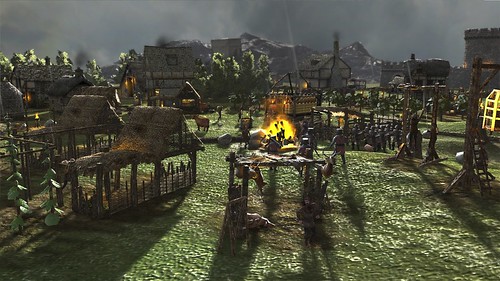 SegmentNext: In what way(s) do you intend to make the visuals stand out for Stronghold 3?

Simon Bradbury: Stronghold 2 was the series’ first 3D outing and it was fairly basic in terms of graphics and lighting. Stronghold 3 looks amazing in comparison, with full control over lighting we can have battles at different times of day, have weather effects and the deferred rendering means that we can use 100’s of lights, so as dusk approaches – little pin pricks of light will flicker on as the villagers light their torches…

Physics is another big addition – with procedurally destructing walls, collapsing buildings and troops colliding and interacting with the landscape as they fall from a tower with an arrow in the belly for example.

SegmentNext: What should we expect for the structure of Stronghold 3’s single player campaign in terms of scenarios, story, economy and other challenges that players will face?

Simon Bradbury: There will be a full 17 mission long narrative driven campaign, recounting the return of a much feared foe from Stronghold 1. There will also be a gentler economic campaign, again story driven, for players that prefer the challenge of the games Simulation over full on fighting. There will be historically recreated castes and sieges, freebuild mode and several new multiplayer modes.

SegmentNext: The option of hiring units from the mercenary camps was one of the stand-out features of the Stronghold Crusaders, should we expect something similar in Stronghold 3?

Simon Bradbury: Mercenary camps are a feature of Stronghold Crusader rather than Stronghold, so we won’t be using this time round. We will have new units however such as the Ranger and certain units will be available to buy from other buildings such as warlord fortresses and abbey estates… 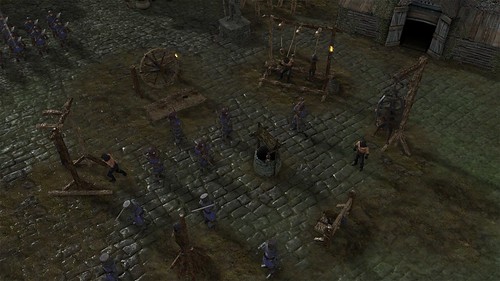 SegmentNext: Can you give us details on the tactical options that will be available to players like Unit formations, Hotkeys; macros etc that enable players to make tactical changes on the fly. I have experience of these not working particularly well in the previous games.

Simon Bradbury: We will be keeping and improving on the formations that we introduced in Stronghold 2 along with the usual commands that you would expect from any RTS such as aggression controls, patrolling etc.

We will also be keeping grouping commands – to allow quick selection of predefined user set up groups, we have done this in the past – but have perhaps been guilty of not making all the features as visible as they might have been! We will be trying better this time around…

SegmentNext: Can you give us details on the mod tools, map editor and other social features that will be integrated into Stronghold 3?

Simon Bradbury: We have a fully functional map editor as always – perhaps the big change this time is that as the game is not tile based as it always has been in the past – we are using a fully 3D editor and giving Modders the ability to use or abuse it as they see fit.

So you can now add models – scale, move and rotate them to your heart’s content. With a new painting on system for pathfinding – anyone who wants to scale a giant chicken and place them in the middle of a medieval world as a glorious obstacle – is now for the first time free to do so!

SegmentNext: How much of a challenge will the economy management be?

Simon Bradbury: A little more than Stronghold 1 but a lot less than Stronghold 2!! Perhaps the most requested ‘feature’ fans have asked us for is to make the game more like the original in feel. We agree that we pushed the economic management too far last time at the expense of combat and so we will be reining it back a little.

We will still be keeping honour – but in a simplified form – honour buildings deliver straight to the keep and the player holds banquet to release the honour (an idea like a few others that we have borrowed from our MMO Stronghold Kingdoms). 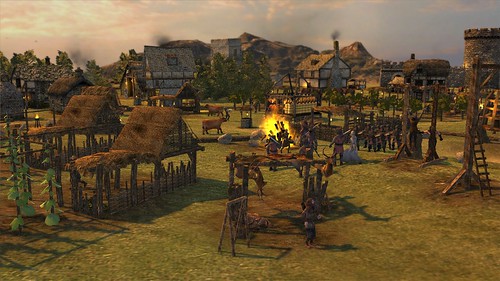 SegmentNext: Can you give us details on the multiplayer part of the game?

Simon Bradbury: We have added King of the Hill and capture the flag modes – both of which are fun variations to the basic Deathmatch mode. We will be allowing LAN games and will also be using Steam for the first time, so friends list etc.

We will also be introducing Kingmaker as a new mode. This will force everyone to start as a peasant and promote up with honour, each new level up unlocking new tech. The question is when do you stop promoting and start fighting!

SegmentNext: Any surprises for us?

Simon Bradbury: Well I do have an update on how our new animal launching system will work. We have introduced the concept of throwing a wider range of animals than just the cows of previous games. So now you can also launch 2 Pigs or 3 Sheep or a sack full of diseased badgers (chosen by fans following a recent Facebook competition) – the more exotic the ammo the longer the recharge time – so save the badgers for when you really need them…!

SegmentNext: Anything in particular you are proud of in Stronghold 3?

Simon Bradbury: Well we will are adding several online features – you don’t have to sign up for them – but if you do you get several cool game enhancing features. The idea I am most proud of is our high score table – not only do we have one for the first time but also we have made it geolocated! So if you site you castle in the real world (well Google Maps) you can then refine the range over which your high score table shows the scores. You might not be the best at mission 3 in the world – but by moving the slider you can be the best in your town.