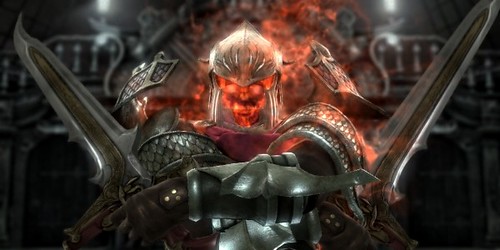 Three days back the amazing SoulCalibur series got a brand new addition to its progressive lineup of fighting games. SoulCalibur V has been released in North America, and Europe and Japan are soon to follow.

For veterans of the fighting game series, this is great way to reintegrate their developed skills with this new version.

But there is always space for those looking to step into the ring for the first time, and though they may seem intimidated by the regular followers of the series, there is still opportunity to learn how to be a respectable player in the game.

This guide is a beginner’s guide for understanding the basics, terminologies and tips and tricks of SoulCalibur V. In this guide we’ll be going through the following:

Terminologies
Terminologies in SoulCalibur are more or less conventional names or acronyms used to explain specific variables such as positions, buttons and their functions, and the combination of the two.

Directional Controls:
In SoulCalibur, the first and foremost  important thing to understand is the mapping of the directional controls.

The conventional method of mapping is:

Now, if that doesn’t seem to make sense to you, then don’t sweat – it’s not rocket science, and with a bit of practice and good memory it can easily be understood.

The above set of numbers that surround an ‘N’ are actually names or notations for directions, keeping in view that your player is facing towards the right (and hence positioned at the left).

The ‘N’ means neutral, which indicates the standard undisturbed position. People who drive will understand it best when compared with shifting gears in a car.

When facing towards the left, this will become opposite:

If this is difficult for you to remember, then just look at the standard layout of a numpad on the closest keyboard you can find – the right facing layout is exactly like that, except that ‘5’ is replaced with ‘N’.

Button Terminology:
Thankfully, there aren’t an awful lot of buttons on a PS3 or Xbox 360 controller, unlike some of the PS4 assumed controller pictures that lurk around the internet.

The button terminology and their abbreviations in SoulCalibur are:

For the PS3, these four buttons are mapped in the following way:

For the Xbox 360, the four buttons are mapped in the following way:

Yes, the Xbox 360 one is a little confuse because of the overlapping of similar notations, but once again, it’s not rocket science.

Other Terminologies:
I’ll post the other terminologies used at times for explanation as well, but don’t contemplate on these too much unless you come across them sometime – they are a little confusing.

Hit Levels
The following are the Hit Levels:

Go to next page to learn more about throws, combos, defense and offense tactics.

Throws
In SoulCalibur V, or any other SoulCalibur, the ability to throw is always given particular importance, simply because it is so effective and easy to carry out, and can get rid of lesser-ranged faster characters before they do too much damage.

The Normal Throws are done by the simultaneously hitting A or B with G. That means there are two types of throws:
A+G
B+G

Character-specific throws: 2A+G or 2B+G (note the 2 indicates the direction)

If you are thrown or get knocked on the ground, you can get back up quicker if you press G right when you hit the ground.

To break an A+G throw, you must press A, but with a bit of timing. Press A right when the opponent’s throw arms (or weapon) just come in contact with your character. Remember timing is everything.

Similarly, for B+G throws, press B at the right time.

Back-throws are the only throws that cannot be broken, with the exception of Voldo, since he’s just weirdly awesome.

Metering System
A new addition in SoulCalibur V is the metering system, and the combos/moves associated with it. The meters next to the character’s life bars can be filled in the same way as they would in any other game: by hitting, taking hits, tech-rolling, breaking throws, guarding etcetera. Note that the meter can fill two levels (200%).

Also, if in a best of three your opponent wins 2 rounds, in the next round you will get one fill (100%) for free. Well, that’s how the meters fill up. But there’s bound to be some use for them right? Right.

You can spend your meter by doing the following things:

Brave Edge:
These are specialized versions of some of your character’s moves. For this, you must first input the move, and then press A+B+K directly afterwards. This uses up 50% of your meter.

Critical Edge:
These are special super-moves that can be executed by executing: 236236A+B+K. Seems complicated, but it really isn’t too difficult to execute after a bit of practice. Uses 100% of your meter

Guard Impacts:
These are counters that repel attacks from your opponent, done by 4A+B+K, and uses 50% of your own meter.

Offensive Combos
A combo is a series of two or more moves in which ALL of the hits are guaranteed after the first; if the opponent gets hit by the first hit of the combo, the rest of the following attacks will hit regardless of what the opponent does, be it blocking, evading or whatever else that would work otherwise.

Combos are of various types and different for different characters. We’ll cover the character-specific combos in another guide.

Miscellaneous Tips and Tricks
For people starting off or not too experienced, the general amount of available moves for a character can be overwhelming. Sadly, not all those moves are ‘useful’, in the sense that they are very situational, and most have better alternatives.

In total there will be around 10 to 15 different ‘useful’ moves, and those are the ones that a player should really try to start with.

How do you determine which move is useful and which is not? Well, that really just requires practice; try to practice against a dummy in training mode and figure out which moves are easier and relatively more damaging. Learn those first. Then, if you find yourself stuck in specific situations that you have no answers to, try to further look into the more situational moves and learn them.

Those acquainted to games like Tekken will notice that SoulCalibur has a similar but much faster action-packed style of fighting. Speed is a very important factor in SouCalibur, and you can only attain speedy fighting skills by practice.

However, speed is not entirely everything. This is where ‘Tiers’ come in. Tiers are basically categorization of the entire set of characters in the game on the basis of advantages/disadvantages.

For example, Nightmare has great range and very high damaging attacks, but is terribly slow and is difficult to play with when the opponent is very fast (like Raphael or Voldo) and gets close to him.

Similarly, other characters have such advantages and disadvantages, and are categorized through Tiers accordingly. We’ll talk about Tiers in detail in another guide.