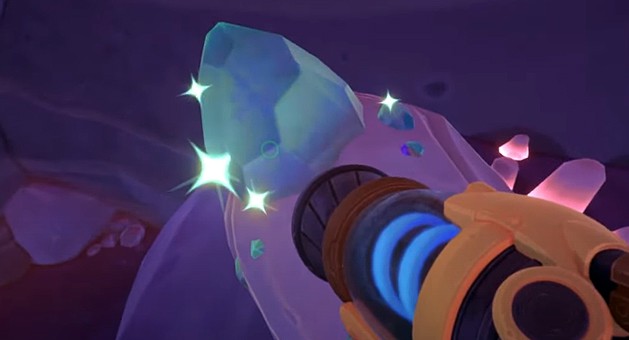 Slime Rancher 2 brings to you a plethora of collectible resources to gather. While most of them are pretty easy to attain, others can be a bit challenging to achieve. With the addition of new features, discoveries, and resources, you’re bound to come across some useful items.

One such item is the Strange Diamond which is one of the rarest and highly recommended resources to collect as it allows its wielder to create Slime Science gadgets and certain Decorative items such as the Azure Glow Shrooms.

This guide will show you where to find the Strange Diamond in Slime Rancher 2.

Where to find Strange Diamonds in Slime Rancher 2

Being one of the rarest items to collect in Slime Rancher 2, there’s no particular location where you’ll find this resource. However, there are many areas on the map; especially dark caves with the highest Strange Diamond spawn rate.

As you approach the spawn area, you’ll notice a metallic sound wave coming from a specific direction which leads you to the item. The sound it produces is distinct from any other sound in the game, which gives a hint as to where the item may be located.

Do note that when you’re on the hunt for this item, make sure to equip a Resource Harvestor as it will help you gather such rare resources on Rainbow Island.

Below we’ll be showing you all the locations where you’ll have a higher chance of finding the Strange Diamond in Slime Rancher 2.

There are three Strange Diamonds found in the Rainbow Fields.

As you enter the Rainbow Fields, head straight into the dark caves that are home to several feral slimes. Once you’ve cleared the area with these Largo Slimes variants, find a large rock at the center which has the first Strange Diamond in the Rainbow Fields sticking out of it.

For the next ones, head over to the cave guarded by the Phosphor Gordo. To enter the cave, you must feed the creature enough slime fruit for it to explode and expose the entrance to the cave.
Once inside, you’ll find the Diamonds in random locations mostly resting near some rocks or other items such as the Tank Liner on the pod.

To find this Strange Diamond, visit the Ember Valley, and at the end of the region, you’ll face a Boom Gordo Slime who blocks the entrance to the cave. Similar to the Phosphor Gordo, you’ll have to feed it. But this time, use meat so it can explode and clear the path that leads you inside the cave.

Head over to the southernmost region of Starlight Strand to come across a hole that takes you straight to the entrance of an underground cave. Once you’ve entered the cave, you’ll find the Diamond near a large rock.

Another Diamond can be found inside the same cave next to a resting Angler Gordo Slime.