Where to Find Knights Of Nine Armor In Skyrim 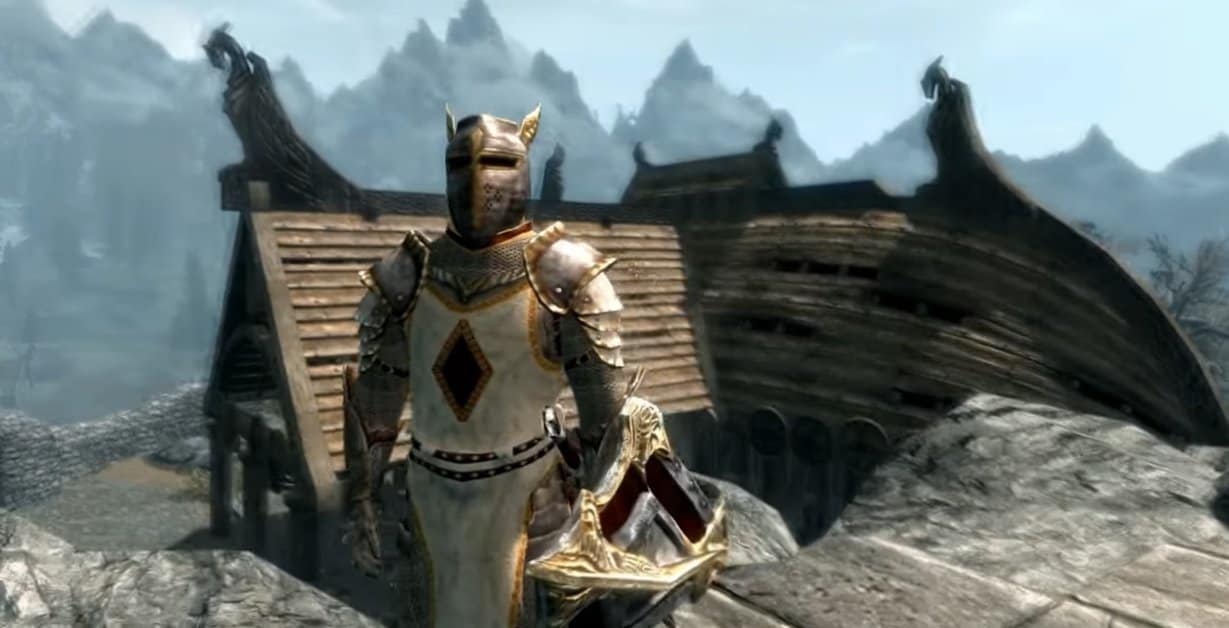 The Knight of Nine Armor in Skyrim is called Divine Crusader. The Dive Crusader’s story didn’t begin as most players believed. He didn’t start with anything modest or lovable, but he did atone for his sins and grow into a man who would restore the honor of the Knights of Nine.

The divine crusader is protecting the divine’s homeland while donning the holy ora’s precious armor. Divine Crusader is a purifying light in a region that is overrun by darkness. The birds sing praises to him for bringing justice to Skyrim.

In this guide, players will get all the information they want to know about the Knights of Nine armor in Elder Scrolls V: Skyrim.

The Divine Crusader Armor starts off to be simple. Players need to go to four skulls lookout which is just east of Markhavs. Take out these bandits and it’s right there. There is no quest or anything.

Some Bandits are typically mean so it’s a little tough to take them. Some of them even have magic spells so you need to be level 30 or 40.

Inside the hideout area itself, you will find out two sets of armors. Mace of the Crusader will give you 22 burn damage and as you will have your armor it will drain out your stamina until you go to nine of the Shrine in Skyrim.

The Divine Crusader’s Armor has almost 9 different pieces. Each piece has different levels unlike other armors and the stats of each level vary from each other.

Helm of the Crusader

Cuirass of the Crusader

Gauntlet of the Crusader

Boots of the Crusader

Greaves of the Crusader

Shield of the Crusader

Uses of Knight Of Nine armor

These artifacts must be utilized to overthrow the sorcerer-king Umaril, who seeks vengeance on the Nine Divines, in Skyrim, where Divine Crusader’s Armor was previously discovered.

The player gains the ability Holy Aura, which contains Shield 5 points on Self and Umaril’s Bane, after equipping all six pieces of armor. Umaril is significantly diminished by Umaril’s Bane, which lowers his Agility, Luck, and Strength stats by 60 points apiece and his Blade skill by 50 points.

Role-play as a Divine Crusador

There are a few ways to roleplay as Pelinal Whitestrake, the original owner of the set if players desire to live somewhat like him:

You must be emotionless and heartless if you wish to be Pelinal Whitestake. It is advised that players create Imperial characters to begin on the Divine Crusader’s path.

Once players acquire the Divine Crusader set, the Imperials receive a +5 bonus when it comes to leveling up Heavy Armor, One-handed weapons, and Blocking.

The participants must watch out that they don’t break any laws. Players will not be allowed to wear the Divine Crusader armor if they commit any crime, no matter how minor.

The alternative is to continue to support the empire. Pelinal was a devoted supporter of Alessia even if he didn’t live long enough to see the expansion of the Empire. She established the Alessian Empire and was the first Empress of Cyrodiil. That someone donning the Divine Crusader armor should continue to serve the Empire is only just.

Skyrim offers its players multiple mods to enjoy all the armors to the fullest. Following is a mod that allows players can get their favorite Knight of Nine Armors.

Knights Of The Nine mod

Head west of Winterhold, just north of the Tower Stone. To be approved to use the armor and weapons, you must slay a Knights of the Nine ghost guardian.

The player can then call upon this guardian by using the conjure book discovered in his spectral remains. The note on the ground can then be read to determine where the armors are located.

You will require specific amulets for each piece to create the enchanted armor. Additionally, you’ll require the Steelsmithing perk.

If you accidentally drop your helmet on the ground don’t worry just go into the console (~) and type :

These well appear numbers and letters. Next, you have to type :

As soon as you type it, the helmet will be back on your menu.