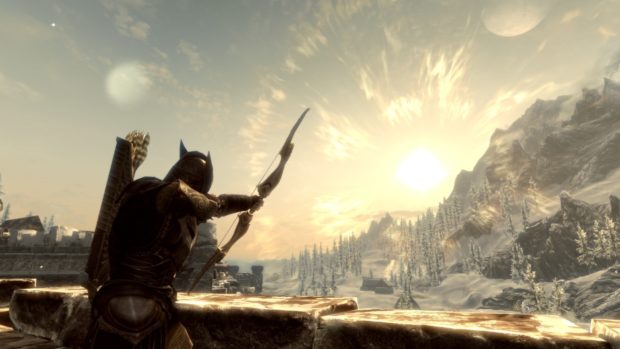 There are a lot of bows in Elder Scrolls V Skyrim and many have unique features, however, with the launch Dawnguard expansion, Auriel’s Bow has become quite an obsession for the Skyrim players and this Dawnguard Auriel’s Bow guide will help you with how to the get the Auriel’s Bow.

The Dawnguard expansion for Skyrim brings within itself a new whole worthwhile quest-line, lots of new craftable weapons, new shouts and more.

It also brings one additional rare naturally-found weapon, called the Auriel’s Bow. The reason the Auriel’s Bow is sort of special is that it has an Achievement associated with it that goes by the same name as the weapon and our Skyrim Dawnguard Auriel’s Bow guide will help you step-by-step on how and where to get the Auriel’s Bow in the game.

Given that there is an achievement that unlocks with the acquisition of the Auriel’s Bow, many players want to get their hands on it and this Skyrim Dawnguard Auriel’s Bow guide will help you step-by-step on Auriel’s Bow location and how to empower it.

20 points of sun damage are dealt with the bow enchantment and it increases three times for an undead target. Its draw speed is extremely fast and it takes less than a second to knock and shoot an arrow.

The fire damage it inflicts makes up for its lower damage. If you have Deadly Aim perk unlocked then you can sneak upon the undead and inflict up to 9 times more damage. You can unlock five perk points in the Archery Skill tree i.e. the overdraw perk and your damage can be increased by 100%.

You can upgrade this bow at a grindstone with a Refined Moon Stone and it can be further improved using Elven Smithing Perk.

IF you shout a Sunhallowed Elven Arrow at the sun, it will cause an explosion that will rain down sunlight upon the enemies damaging them which is similar to Storm Call Shout.

If you shoot this one at the sun, it will cause what looks like a black hole instead of the sun. Vampire will be unaffected by the daylight now and this would go on for the whole day.

Thankfully, this weapon isn’t as difficult to obtain as some of those relatively worthless Daedric weapons that required so much effort and lengthy traveling.

Auriel’s Bow can be found in the main quest-line of Dawnguard, during the quest Touching the Sky, after becoming a Moth Priest.

After beating the quest-line of Dawnguard, you can speak to Serena, who will combine her power with the arrows you are given. This will give you Bloodcursed Arrows. Use the Bloodcursed Arrows and the Auriel’s Bow in the sunlight outside in Skyrim, a point at the Sun and fire, and watch as you unlock the achievement.

And if you wish to hunt some deer, sheeps, and other animals to cook, you can always use this ranged weapon without any hesitation.

That is all for our Skyrim Dawnguard Auriel’s Bow guide with tips on how to get the bow and how to empower it.