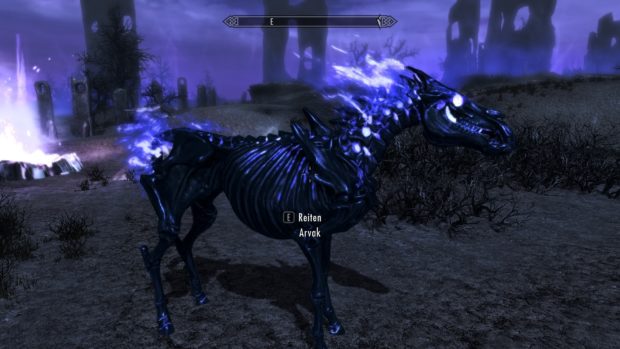 Horses are one of the main modes of transportation in Skyrim which players can use to go from city to city, climb mountains, however, not every horse is as good as Arvak Undead Horse in Dawnguard expansion and this Dawnguard Arvak Undead Horse Location guide will help you find it.

Horses are rather expensive in Skyrim, unless of course, you’re stealing them, which has both a moral and possibly a financial impact on your character (fines and poor horse-sellers chasing you).

Though originally Skyrim didn’t offer any permanent solution to lengthy traveling in an economical and faster fashion, Dawnguard certainly does.

How To Get Arvak
Obtaining Arvak can be slippery if you’re not paying attention to Dawnguard’s main quest-line. You attain Arvak in Soul Cairn, the realm of Oblivion occupied by the undead.

After the Chasing Echoes quest, you’ll head back with Serena to the exit portal that returns to Castle Volkihar in Skyrim.

While on your way, you’ll hear a Soul yelling ‘Arvak’. Speaking to him and he will tell you of the horse that has run off and will ask you to look for him.

Head to the large castle in Soul Cairn and then head east. Look around for a small structure with pillars and a few wraiths nearby.

In the center is an altar with Arvak’s skull. Once you’ve done so, a quest marker will appear, pointing towards the Soul you had just spoken to – he has traveled closer to you. Speak to him and Arvak, the undead horse, will be yours to summon, both in Soul Cairn and in Skyrim.

After you acquire the spell to summon Arvak, you can summon him in the Soul Cairn or in the wilds; but you cannot summon him in any of the walled cities, like Solitude of Whiterun.

You can summon him in Solstheim and Blackreach, but cannot in the Forgotten Vale.

A few things you need to note are:

Reasons To Get Arvak
Arvak’s unique characteristics make him an extremely useful ally. If you’re stuck in a location far away where you cannot purchase items, you can summon him and get out of there.

You can use Arvak to increase the level of your offensive combat skills, like One-Handed.

Arvak can allow you to drop from long distances and take little to no damage, as he will take the fall damage for you.

You can bypass the gated ruins in the Soul Cairn using Arvak. Summon him through the gate and then activate him.

In Solstheim, you cannot bring any of the other horses to the island; whereas, Arvak can be summoned there.

You can re-summon Arvak as many times as you please; meaning you never have to worry about your horse dying.

That is all for our Dawnguard Arvak Undead Horse Location guide with tips on how to get the undead horse in Skyrim.