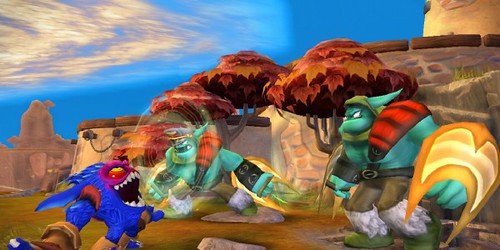 You need soul gems to unlock upgrades for Skylanders. They are hidden throughout the game and once you have found one, you can buy the corresponding upgrade from Persephone. Follow this Skylanders Giants Soul Gems Locations to find them all.

If you want to upgrade your Skylander, you should look for these gems in the locations pointed out in this guide. We have also added the upgrade you will unlock for finding these gems.

Chapter 1 – Time of the Giants
Unlock: Shroomboom’s Self Slingshot Ability
The ancient mines have this Soul Gem. Switch to a giant and move the boulders out of your way so you can collect the soul gem which is next to the ledge.

Chapter 2 – Junkyard Isles
Unlock: Hot Head’s “Hot Rod” Ability
The third stop in the Dread-Yacht has a set of blocks, which will guide you to this gem. North-east from the blocks is a wall which can be broken/destroyed by a giant or a bomb. The gem is inside!

Chapter 3 – Rumbletown
Unlock: Hot Dog’s “Ding Dong Ditch” Ability
After falling from the bridge, you will get to a set of blocks, which will lead you to a key. This key is to be used on the gate you passed earlier but to get the soul gem you have to enter the hut which is right next to that gate and use the key to open the door of the lodge which has a spare key and a soul gem.

Chapter 4 – Cutthroat Carnival
Unlock: Swarm’s “Bee is for Butt Stinger” Ability
After the big battle in the Promenade, the Battle Gate will drop. Take the stairs and then a u-turn to follow the ledge on your left. Cross the path and you will reach to the gem.

Chapter 5 – Glacier Gully
Unlock: Thumpback’s “Blowhard” Ability
You will spot this one after reaching to the Frozen Toe. With the help of the spring pads, get to the Chilled Bown and drop off the ledge which is in the bottom left corner.

It will be easier to use the gliding ability to pass the slippery ice without being effected. Now follow the outcroppings to your treasure!

Chapter 6 – Secret Vault of Secrets
Unlock: Bouncer’s “Fists of Destruction!” Ability
Head through the bridge after you have reached the West Dam, and you will see this gem locked behind a tricky puzzle. The solution to that: Rotate Left twice, right six times and left three times. The gate will open so you can take your reward.

Chapter 7 – Wilikin Village
Unlock: Pop Fizz’s “Shake It” Ability
You see the gem a lot earlier in the level as it’s blocked by some roots, move forward as there is no solution to get there yet.

When you reach to the Perilous Coil, head to the North and follow the slope to that area. The log barrier can be countered by a giant, and then it’s all straight forward.

Chapter 8 – Troll Home Security
Unlock: Crusher’s “Rockslidin’ Out” Ability
Get to the Battlements and take a sharp left to find the statue of Kaos. Use a giant to lift this statue and step on to the warp pad and it will take you to the gem.

Chapter 9: Kaos’ Castle
Unlock: Ninjini’s “Dazzling Enchantment” Ability
The way out of the Secret Passage has the Soul Gem on one of its balconies. When you exit the Secret Passage, there is a fortress-wall (opposite to the drained pool) follow the wall, and you will find a ledge on the left. Drop down and head inside the door to find this gem.

Chapter 10 – Aerial Attack!
Unlock: Fright Rider’s “A Real Drag” Ability
Destroy the second turret on the Spectral Dreadnaught to get to the far end of the Propeller Array. Now hit the closest switch to lower the nearby gate, head inside and switch to an Air Skylander to get to the warp pad. Follow the Freewind Flats and get to the island. Use spring pad to jump over the hill and get the gem.

Chapter 11: Drill-X’s Big Rig
Unlocks: Sprocket’s “Landmine Golf” Ability
Reach to the Upper Transition Station and cross the extending platforms, drop off from the ledge (on to the Middle Auxiliary Deck) drop again, and you’ll see the gem.

Chapter 12: Molekin Mountain
Unlocks: Tree Rex’s “Woodpecker Pal” Ability
There is a block puzzle in the Under Mountain Mechanogear area, straight after is a ledge to drop down but don’t do it as of yet. Push the middle block off the ledge so it falls down.

Chapter 13: The Oracle
Unlock: Eye-Brawl’s “You’ll Shoot Your Eye Out” ability
Choose Big Fish when you have the choice to! Follow through the trial and you’ll find the gem in the end.

Chapter 14: The Autogyro Adventure
Unlock: Jet-Vac’s “Eagle-Air Battle Gear” Ability
When you are about to unlock the vault door in the Hall of Silence, the gem is nearby. Make sure that you hit the SECOND LANDING SPOT while on the Autogyro, or you’ll have to start the stage again. Follow the route to the gem.

Chapter 15: Lost City of Arkus
Unlock: Chill’s “Call the Narwhal!” Ability
Reach the Pit with Possibilities and you will reach the area where you have to use a spring pad to reach a ledge and grab the key. There is a breakable wall on the left which can be broken through with the help of a bomb or a giant attack. It is followed with another wall, break it and collect.

Chapter 16: Brining Order to Chaos!
Unlock: Flashwing’s “Crystal Lighthouse” Ability
This one is spotted when you enter the Arkeyan Foyer at the start of the level but have no access until you get to the upper floor of the area.

Follow the path and you will have to kill a group of enemies so the spring pads can be used. Now jump on to the ledge which has the last soul gem of the sequel.