Shadow of the Colossus Boss Guide – Defeat All Colossi, Tips and Tricks 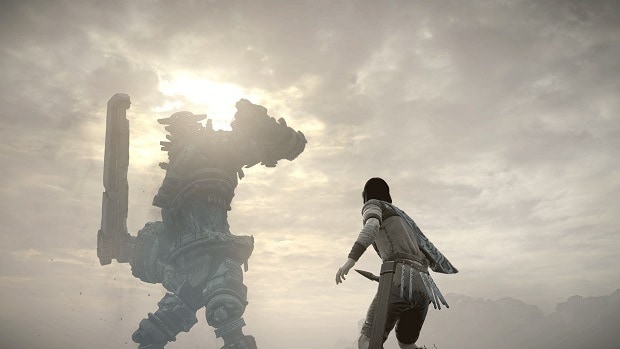 Shadow of the Colossus Boss

Shadow of the Colossus is about hunting giants and massive creatures with exciting artwork and breathtaking combat encounter. To take a giant it usually requires complex puzzle. First, you need to understand the environment and weakness of the colossi.

The guide will help you in identifying the spots where can climb the giant and expose its weak spot. Knowing the weak spots is very important because it deals much more damage and makes the boss much easier to kill. Getting to the weak spot usually requires climbing on a fur type area. Wander can always climb the furry area of the boss.

The First Boss
In this boss fight, you need to manage your stamina which is not an easy task because the boss keeps on shaking and try to toss you off his back when claimed upon.

For the left leg climb to the back and keep attack it until it falls.
Restore you stamina by jumping on the ledge on the rear and find a flat surface to stand on.
Climb the head by using the fur and stable it until its dead.

The Second Boss
Four-legged Titan will allow you have you mount with you. This fight requires mobility and use of bow to dis-balance the creature.

The Third Boss
There no way to reach the weak point from the feet of the Truly Titanic.

The Fourth Boss
The boss has four legs and this time there is no weak spot in the legs so you will have to use Deception to reach the top of it.

The Fifth Boss
Wander reaches a lake where he must leave its horse behind with stone structure. The next boss is flying so need to track this one to land and then climb it.

The Sixth Boss
This traditional human-shaped requires you to hide somewhere. The Colossus is not that friendly so run as soon as it starts.

The Seventh Boss
The fight takes place underwater and boss creates electricity like the gigantic eel. In this fight, you need to manage stamina and oxygen.

The Eighth Boss
This is one the trickiest boss and you need extra care when taking him on. Though if you are not careful the boss can easily take you out. The boss looks like an iguana of some kind which charges electricity and shoots a beam which you need to avoid.

The Ninth Boss
Another four-legged boss in Shadow of the Colossus which you cannot climb so you need to use the environment to your advantage. It is tricky to take this boss down.

The Tenth Boss
The next Colossus will require you to have a horse. It speeds through the sand and hit the Wander if you are not paying attention.

The Eleventh Boss
The tiniest boss in Shadow of the Colossus of all but also very tough. The small size beast can easily take you out with a blink of an eye.

The Twelfth Boss
There is no clear way to reach this boss in Shadow of the Colossus, it’s massive in size and hangs around the water. It shoots projectiles, making it more dangerous than other before.

The Thirteenth Boss
The dragon titan is giant and majestic one of the most awesome bosses in Shadow of the Colossus. The fight is full of action and requires the full attention of the player.

The Fourteenth Boss
Shadow of the Colossus Fourteenth boss looks familiar almost a repeat but no its much different and behaviors and attack every more deadly. To successfully kill this boss you need to get somewhere this boss cannot reach you.

The Fifteenth Boss
This last boss in Shadow of the Colossus, that is made for war with huge firing capabilities which cannot be dodged. So you need to move the cover from cover until its safe to move between laser blasts.

This is all we have in our Shadow of the Colossus Boss Guide. If there is anything else that you would like to add, let us know in the comments section below!