Shadow of Mordor Epic Runes Guide – How to Get Easily 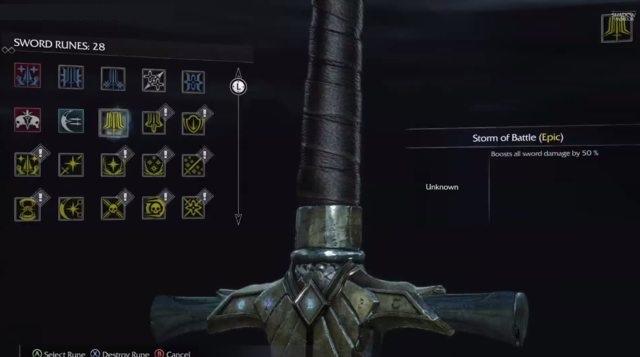 In Middle-Earth: Shadow of Mordor, Epic Runes can be considered as Weapon Runes having higher levels. Contrary to the popular belief, Epic Runes are a rare drop and not every enemy drops them.

It should also be noted that only high-level Uruk Warchiefs and Uruk Captains drop Epic Runes. What makes these runes so epic is that their effects are not restricted by Rune-Level.

For more help on Middle-earth: Shadow of Mordor, read our Artifacts Locations, Ithildin Locations and How to Earn Mirian.

Every Epic Rune has a pre-determined bonus effect that does not change. For instance, Stand and Fight will always increase Talion’s damage by 2x whenever his HP will drop below twenty-five per cent.

In this guide, I’m going to talk about different Epic runes that can be found in the game. Once again, note that Epic runes are completely random and you do not have any control over which one you receive:

Bones of the Earth
You will recover +3 Elf-Shot by a flurry kill.

Burning Pitch
You will have fifteen per cent chances of igniting enemies by countering.

Elven Grace
You will have fifty per cent chances of reducing the melee damage to half.

Evenstar
Every time a hit streak is charged, Talion will recover complete Focus.

Foe Hammer
With this, combat execution will net you +2 Elf-Shot.

Mighty Rage
This Epic Ruin increases the stun and knockdown time of the melee attacks.

Ruination
This Epic Run increases the Storm of Urfael duration by ten seconds.

Stand and Fight
When below twenty-five per cent HP, Talion will deal double damage with his sword.

Storm of Battle
This Epic Ruin increases the damage of all swords by fifty per cent.

The End Comes
With this Epic Ruin, Talion will blast enemies’ heads with Wraith Blast.

The Undying
This Epic Ruin allows you to recover all Focus and Elf-Shot on any Last Chance.

Wraith and Ruin
This increases the stun and knockdown duration of Wraith Flash.

Ascendant
This Epic Ruin decreases the Focus depletion rate by fifty per cent.

Bow Master
You will have fifty per cent increased bow damage with this Epic Ruin.

Explosive Demise
Talion will have twenty per cent chance of blasting an area with a charged headshot.

Fell-Handed
You will recover Flame of Azkar twice as fast with headshot kills.

Knight of Eregion
Shadow Strike kills will get you +1 Elf-Shot.

Stand Fast
The damage output of all bows increase by a hundred per cent when Talion’s HP is below twenty-five per cent.

Wrath of the Eldar
This Epic Ruin increases the duration of Flame of Azkar by ten seconds.

Bane of Mordor
This Epic Ruin increases the duration of the Shadow of Acharn by ten seconds.

Forge of War
With this Epic Ruin, Drain/Brand will net Talion +2 Elf-Shot.

Lure of Power
Talion gets thirty-three per cent chance of branding an enemy standing near a target that is stealth branded.

Oathbreaker
Shadow of Acharn will recover twice as fast with stealth kills.

One with Nature
Talion will become immune to poison.

Orc Hunter
How to Acquire: Linking your WB ID to your Account
Enemies will get terrorized by brutalized stealth kills.

Flame of Anor
How to Acquire: Best Buy Pre-Order Bonus
After a long combo, Talion’s weapon will catch fire.

Gravewalker
How to Acquire: Link Palantir iOS App to your Account
Take out a Captain and all nearby enemies will run away.

Like I have said, Epic Runes are rare drops, but there are some ways using which you can increase your chances. First off, note that low-level Captains and Warchiefs do not grant you any Epic Runes.

There may a couple of exceptions, but the best way to get them is by killing high-level Warchiefs and Captains. Make sure to attend Captains’ and Warchiefs’ Power Struggles and let them win.

You can also let them kill you to increase their rank and level. Once you have done that, head back to them for a revenge kill and you will most certainly get a good rune.

Remember that these enemies become really tough after gaining power, so make your decisions carefully. Another good way of earning these runes is by threatening the Captains and Warchiefs.

As soon as you threaten a Captain or Warchief, it will increase in level and will call reinforcements to take you down. Once again, this will make things a lot harder, but you will have increased chances of getting an Epic Rune.