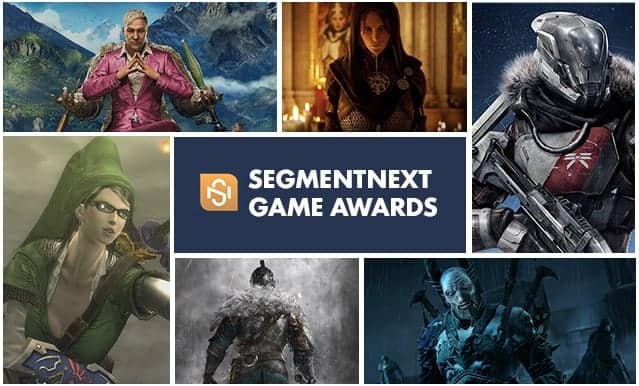 From the joys of experiencing GTA V on current-gen to frustrated Dark Souls II moments, from reliving the childhood moments with Pokemon Omega Ruby & Alpha Sapphire to the feel of driving around the coast in Forza Horizon 2, from the rushed Assassin’s Creed: Unity to a magnificent journey in Dragon Age: Inquisition – it feels like 2014 went in a flash.

Now, before we welcome 2015 with all the wonders and joys of the gaming world, let’s have a quick look at what believe were the best of 2014 in video games with SegmentNext Game Awards:

Sunset Overdrive – click here for nominees
Developed by Insomniac Games and published by Microsoft Studios exclusively for the Xbox One, Sunset Overdrive is an open world third-person shooter like no other! From extensive character customization to impractical weapon designs, players run on walls, use zip-lines, and grind rails to move about the colorful Sunset City overrun by mutants.

In a manner seen in games like the Prince of Persia and Tony Hawk games, players are given freedom to move about in any way they want, meeting fellow survivors, and plotting to stay alive. Aside from a fun-filled single-player campaign, the game offers an equally enthralling co-op mode with up to 8 players.

Dragon Age: Inquisition – click here for nominees
Developed by BioWare and published by Electronic Arts for all home consoles and PC, Dragon Age: Inquisition is the third installment in the series. The game offers multiple playable classes/races and an open world larger than the previous installments. Many features introduced in the first two games like the ability to switch to Tactical Camera are retained in the game.

Set in the continent of Thedas, the game beings with opening of a Breach sprouting demons and killing many notable figures during a conference between Mages and Templars. The only survivor of the scenario is player’s character (with a mysterious power of sealing the Breach) that is taken into custody and later assigned to restore peace in the continent and becomes head of the Inquisition.

The game is being developed using Frostbite 3 and SpeedTree and features both single-player and multiplayer components across all platforms.

The game launched on both 3DS and Wii U, each with its exclusive gameplay features and modes. The game offers extensive customization options with the ability to create your own characters using Mii figures (exclusive to Wii U). Aside from solo experience, players can match up against friends and family and local co-op or online multiplayer experience. Although there are some ongoing issues with the netcode of the game, but it’s nothing compared to all the awesomeness it offers.

Featuring hours and hours of content, Super Smash Bros. for 3DS keeps you hooked for a longtime. Doesn’t matter whether you’re a long-term fan or a newcomer, if you own a 3DS, you owe it to yourself to add this one to your library.

Dragon Age: Inquisition – click here for nominees
I had lost my faith in BioWare after Dragon Age II, but they came back and created one of the strongest RPGs of the modern world. From exceedingly cool characters, intriguing storyline, gigantic world to decent combat system, BioWare has indeed created a game worthy of praise which shouldn’t be missed!

This is one of those RPGs by BioWare which run excellently on both consoles and PC. With hundreds of hours worth of gameplay and everything you expect from a decent RPG, Dragon Age: Inquisition is certainly one of the best games created in 2014. I won’t even talk about some minor issues with combat and camera because overall experience is so overwhelming that those issues can’t be taken into account.

Child of Light – click here for nominees
To give credit where it’s due, Ubisoft Montreal has outdone them with this 2D side-scroller. The colorful world, characters, music, artstyle; everything has been so carefully designed that it makes Child of Light not only the best Playstation Vita game of 2014, but of all time.

The game tells the story of Young Aurora who wakes up in a strange land deprived of light, under the darkest sky. This young warrior swears to restore the light to the night and free Sun, Moon, and stars before facing the evil queen holding her homeland, Kingdom of Lemuria. This 2D side-scroller agglomerated with RPG elements is definitely worth checking out this year, even if you’re not a fan of the genre.

Bayonetta 2 – click here for nominees
This game is undoubtedly a masterpiece of hack and slash genre and surpasses its predecessor on many different grounds. From breathtaking action to intense fighting sequences, Bayonetta 2 is brimming with fun; hard to let go. With eye candy visuals and spectacular frame rate, Bayonetta 2 is definitely a reason to own a Wii U.

The game takes place after the events of the original Bayonetta with a large arsenal of weapons, new foes to cut down, and many faces from the past. The game also offers a multiplayer mode which itself is one of its kind! Currently sitting at 91 on Metacritic, Bayonetta 2 is definitely adding to your Wii U library.

Console of the Year

Playstation 4 – click here for nominees
Launching at a better price-tag and with superior specifications, Playstation 4 clearly stood out as the best Home Console of 2014. The console kept Xbox One in its trail for several months until Xbox One changed the pattern for the first time in holiday season. 2015 is looking even bright for PS4 with several exclusives under its belt; namely, The Order: 1886, Bloodborne, Uncharted 4: A Thief’s End, and No Man’s Sky.

Although PS4 exclusives launched in 2014 were a tad meeker than what was offered by Wii U and Xbox One, Sony’s Playstation 4 remains the choice of a majority of console gamers out there! With all three consoles well into their product cycle, it’ll be exciting to see which one outshines the others in 2015.

Game of the Year

Taking place after the events of first two Dragon Age titles in the continent of Thedas, the game begins when a Breach is opened, spitting monsters and children of the night into the in-game world. An ongoing meeting between Templars and Mages is overwhelmed by the havoc caused by the Breach and gives rise to the events of the game. The game’s primary character, the only survivor of the Breach’s effects and the only known person to seal it, is captured by the assistants of the Thedas’ Divine. One thing leads to another and an Inquisition tasked with restoring peace in the continent is formed with the player being named as the Head of the Inquisition.

The game retains many features introduced in the first two games like the Tactical Camera from Dragon Age: Origins. From a technical perspective, the game runs brilliantly across all platforms and is one of the RPGs by BioWare that runs excellently on PC.

The game has indeed raised standards of storytelling and will keep on surprising you throughout the experience. From creatures of the night to fearsome High Dragons, Dragon Age: Inquisition is definitely one of the best RPGs of the modern world and our Game of the Year.