Scalebound Comes to Xbox One and Windows 10 in April 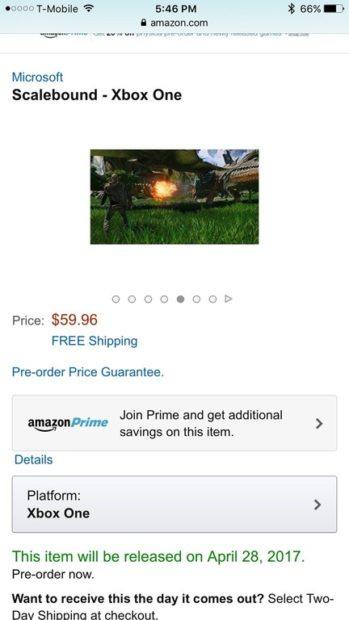 Microsoft’s long awaited Scalebound is coming to Xbox One and Windows 10 in April next year. According to a listing on Amazon, the game is hitting shelves on April 28, 2017.

Microsoft is yet to confirm the news so take it with a massive grain to salt. Amazon is known to list dates early and leak plenty of other information. However, not always does it come true. But still, we should remain optimistic and keep faith in Amazon!

We’ll let you know as soon as we know more.

On a related note, Scalebound is being developed by Platinum Games. The project is lead by director Hideki Kamiya who recently discussed their partnership with Microsoft.

To put it in one word, Microsoft is big. They took a big bet on us to make a big game. But they have a ton of technology resources. They can do an enormous job supporting you and helping you make these big things.

He went on to say:

So as a partnership, that’s been really interesting. All that support and all the resources they can bring to bear to make a big vision come to life is very impressive. It allows a team to learn a lot from people they wouldn’t otherwise be exposed to and grow in interesting ways.

Scalebound will release as part of Microsoft’s Xbox Play Anywhere program. Meaning you only need to buy a copy to PC or Xbox One to get access to Scalebound for the other platform.

For more on Scalebound, stay-tuned!