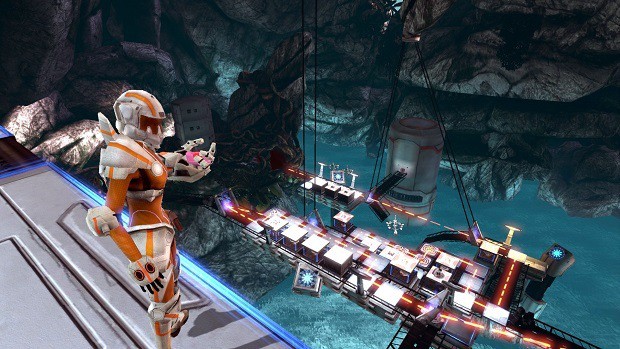 In Sanctum players assume the role of a female protagonist called Skye. Your objective in the game is to protect the core from ground as well air-born enemies. You carry around 3 weapons: Gatling gun with a grenade launcher as an alternate, Sniper rifle and a Time freeze gun which stop enemies dead in their tracks for a short amount of time.

The weapons also have an overheat meter which lists how many bullets you can fire before the gun overheats. You can upgrade your weapons to enhance their ability to get upper hand against your enemies.

You start out the game with building towers on the playing field. As you are building your defense towers, enemies will be approaching to reach out to your core, you will have to stop the incoming enemies by using all the arsenal at your disposal.

A tutorial Option is also present for people who have just ventured into the tower defense genre.

For me the game is wonderful gesture to other independent games such as World of Goo and Super Meat Boy. However the difficulty varies from player to player.

It has a few drawbacks though which include The A.I. being either too easy or very hard and choices of weapons being dull. Especially in Co op mode, A.I. can surprisingly make the game annoyingly difficult at times.

The attractive visuals and easy learning curve immerses you in the game but the lack of content becomes the downside as soon as you realize it only has just three levels and two gameplay modes.

The varying difficulty settings for these game modes provide you with an opportunity to test your skills and try out different strategies against now tough enemies but it isn’t enough.

Overall, it’s a good game and does a great job in combining two genres into one game. It’s a must buy for those who want to try a creative and imaginative game to take some time off the AAA titles.

The attractive visuals and easy learning curve immerse you in the game but the lack of content becomes the downside.