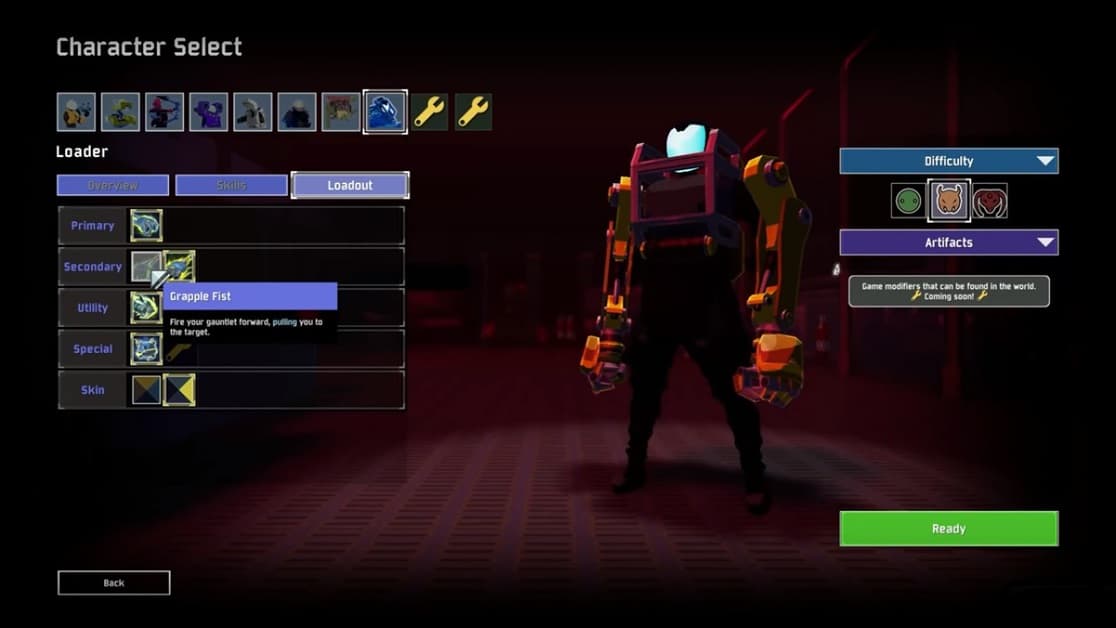 If you want to learn more about the Risk of Rain 2 Loader builds and loadouts, look no further than this guide, which will show you how to unlock Loader, her pros and cons and her abilities.

Loader is a very powerful burst-damage character and is also extremely mobile, which makes her a great survivor to have in Risk of Rain 2.

How to Unlock Loader
The quickest way to unlock Loader is by completing the Guidance Offline Challenge. In this challenge, you’ll have to defeat the Alloy Worship Unit in Stage 4 (Siren’s Call).

The best survivor to use for this challenge is the Mercenary. He can kill the Alloy Worship Unit faster than all the other survivors in the game.

Attempt this challenge in the Drizzle difficulty – there’s no reason to up the difficulty any more.

After starting the challenge, play through the stages until you get to Stage 4. Once there, you’ll have to kill five Vulture Eggs.

They spawn randomly around the map, so you’ll need to look around to find them.

After you kill the fifth egg, head to the very center of the map and you’ll encounter the Alloy Worship Unit.

Defeating the Alloy Worship Unit is surprisingly easy if you’re playing with the Mercenary.

All you need to do is to jump above it and shift into it while you’re above it. Doing this will push the Alloy Worship Unit into the ground.

Once it makes contact with the ground, the Alloy Worship Unit will blow up. Loader will now be unlocked.

The banner granted by this ability makes Loader extremely tough and this passive ability compliments her grappling hook very well as you’ll be falling around a lot while using it.

Primary Ability – Knuckleboom
Swing at nearby enemies for 320% damage. There isn’t much to this ability. Loader punches the opponent in front of her for 320% damage and gets a temporary banner from her passive.

This choice is a no-brainer really. Spiked Fist is an overall better version of Grapple Fist.

The difference between these two abilities isn’t as drastic as it was with her secondary ability.

Charged Gauntlet deals more damage, but it has to be charged up. It also deals less AoE damage than the Thunder Gauntlet.

Thunder Gauntlet seems to be a bit better but it’s mostly up to preference.

Special Ability – M551 Pylon
Throw a floating pylon that zaps up to 6 nearby enemies for 100% damage. Can be grappled.

This purpose of this ability seems to be to get rid of annoying aerial enemies which are hard to kill with her other abilities.

How to Play with Loader
In RoR 2, Loader mostly deals burst damage. This means that instead of dealing continuous damage, she dishes out a lot of damage very quickly and then has to wait for cooldown to be over before she can do it again.

Another thing to note about Loader is that she’s a melee character. However, due to the fact that she is extremely mobile, this isn’t much of a problem.

Loader’s most powerful move is her utility punch, which deals 2100% base damage and the damage scales up with speed.

This allows you to use your grappling hook to increase your speed as the punch is charging up to dish out a mind-boggling amount of burst damage.

Loader’s primary ability should not be your main focus. You should only use it to finish off weakened enemies. The rest of Loader’s abilities should be the ones being used most.

The following rotation will allow you to use Loader’s abilities in the most efficient way you can.

Increase your speed using your Grapple Hook and charge up your Gauntlet as you’re doing so.

When you’re at the mid-point of the swing with your Grapple Hook –where you’re at the maximum speed – Release the attack to deal an insane amount of damage.

This should be the main attack you do with Loader. It deals so much damage that there isn’t really any point in trying anything else.

Best Items to Use with Loader
Risk of Rain 2 has a plethora of items to use with each character. However, there are some that fit certain characters in RoR 2 like Loader better as we have mentioned below

There are two main kinds of builds for Loader, the Attack Speed Build and the One-Shot Build.

We will discuss both builds and, their pros and cons and you can see which one is better for you. Let’s take a look:

Attack Speed Build
For Attack speed you will need Artifact of command otherwise you will need your luck to be extremely good in order to get everything you need.

You may also get some good use out of Drowned unlocked but you can live without this one.

You will need six to seven Lens Markers glasses that would be used for white items, for green items; 2 fuel cells and for your legendary, you would need a 57 leaf clover.

Go to the newt altar in order to get an early legendary at stage 1 or at stage 2. This will enable you to do the void fields.

Get three Gesture of the Drowned from the Bazaar between Time if it is unlocked along with a Spinel Tonic.

The Spinel Tonic Lasts forever when the 3 gestures and 2 fuel cells are combined which can be very helpful for unlocking Loader’s Skin in monsoon.

You will get a 70% bonus on your attacks by using 2 war horns when your Spinel Tonic is activated constantly and that is without including the Spinel Tonic’s bonus.

You will have to balance your Tougher Times and Lens Maker’s glasses (when you have enough of them) and that will defend you against damage.

You will need to combine 3 Predatory instincts and add them to the critical chance after you have 2 war horns.

Due to this you will get a lot more attack speed and you will get the ability to be a lot tanky when you add Tougher Times.

Infusions are the way to go when you predatory Instincts. Any legendary will work with this build except Shaped Glass as it will cut the temporary hit points in half.

One Shot Build
For one-shot build you would need the upgraded secondary spiked fist and the default utility charged Gauntlet as they are the best choice.

Thunder Gauntlet is also a good choice but charged gauntlet would be the better option here.

With One shot you can go full glass cannon ad even get shade glass because the one-shot protection is really busted on this character.

You can increase your damage by using elite ukulele and guitars bands and you should use them for every survivor.

You can just sit on the vagrant early on in the game and mid-game and ignore the burst they do with your passive.

But if you can definitely go for crowbars and your gauntlet will get eh highest burst of damage in the game for single target.

Other than that we can use standard ukulele and Will of the Wisps which is good for any character but if you stack crowbars and armor-piercing round that will increase your damage by a lot, like A LOT when you get the Old Guillotine.

Comparison
You will get temporary hit points whenever you someone using Knuckleboom, Spiked Fist, Thunder or Charged gauntlet which is one of loader’s special abilities.

The catch is that the amount of damage is irrespective of how much damage you deal. You can deal very high or very low damage per hit but you will get the same number of hit points per hit.

So it is better to increase the speed of your hits. This gives a point in favor of Attack Speed Build