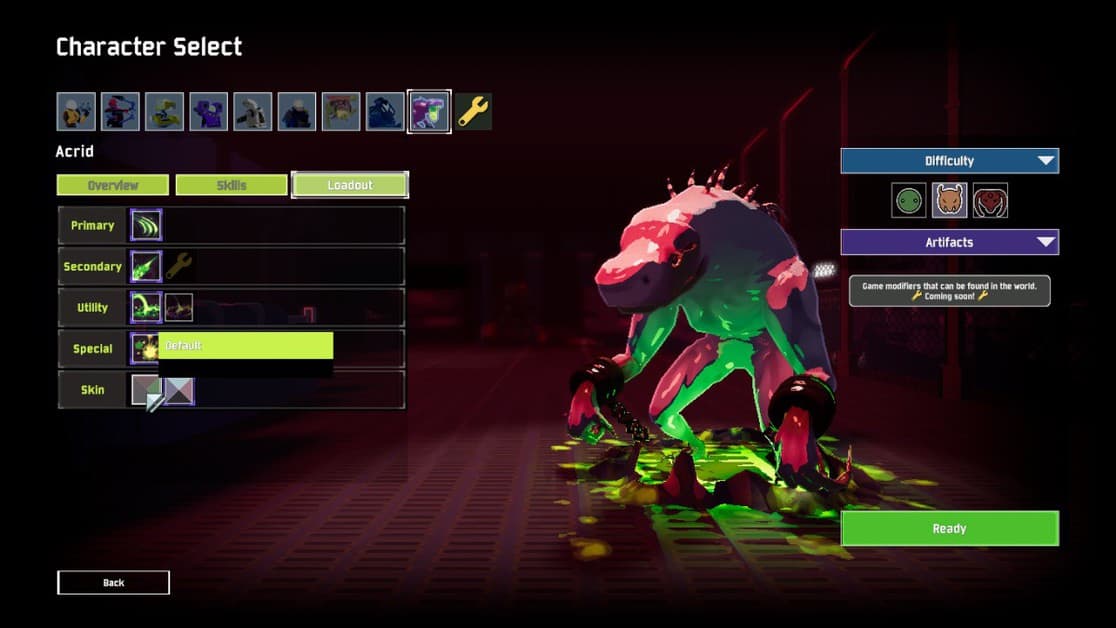 Acrid is the ninth survivor in Risk of Rain 2. These Risk of Rain 2 Acrid Builds and Loadouts will cover everything you need to know about unlocking and playing as Acrid.

Acrid was released as part of the Hidden Realms update and can prove to be formidable when taking down bosses. Mastering Acrid in RoR 2 can prove to be quite beneficial especially when playing as a team.

How to Unlock Acrid
You must get to the Bazaar between Worlds and the best way to do so is to use the newt altar.

Then you must jump from the edge behind the blue portal and land in the hole in the wall.

Eventually you will come across another portal that will take you to the Void Fields where a purple shield will protect you from sustaining damage while you’re there.

Turn on the purple orb in the center and take out the enemies you encounter.

If you’re running out of shield then quickly get to the next one nearby before you take damage. After all nine shields have been activated you will finally get to play as Acrid.

Poison
This ability deals damage that is 10% of max HP (including shields) for 10 seconds. This can not apply more than once or kill enemies.

Caustic Leap
Leap up and then land hard to cause 320% damage to foes while  stunning, and poisoning them via a pool of acid that deals 25% damage.

Epidemic
Deal 100% damage and poison enemies with a disease that can spread to 20 targets.

This character has exactly one loadout which is a choice between Caustic Leap and Frenzied Leap. Which one you pick depends on the type of damage you want to deal.

How To Play Acrid

Acrid can’t really kill enemies but he’s great for boss fights. He doesn’t move around much so we don’t recommend you engage in melee combat too often.

Stick with using your abilities to hurt enemies and poisoning them.

Once they’re left in a weakened state with barely any health, you can get up close and finish them off with your melee attack. It’s as easy as that.

This is the closest you are going to get to the best build recommendation for Acrid in Risk of Rain 2.

I will let you know which items would go best with this build so that you can absolutely max out your performance for Acrid in the game. Let’s take a look:

First thing to note is that DOTs and AOE items are the absolute best for Acrid, it’s like a God send.

An example would be the Tri-Tip Dagger that will stack 15% damage per attack and chance to bleed the enemy for 240% base damage. Acrid can take out 20 low health enemies easily with this item.

Gasoline and Will-o-Wisp would work exceptionally with Acrid and Back up Magazine will really help you a lot.

Moving on we will also get Old Guillotine which can instantly kill Elite Monsters that have less than 20% health which is great.

Now the best item in my opinion is the Ceremonial dagger, with this item if you kill one enemy that will start a chain reaction wiping the map and it’s beautiful.

This in my opinion is the best build for Acrid. If I missed anything let me know. For more guides like this visit our site