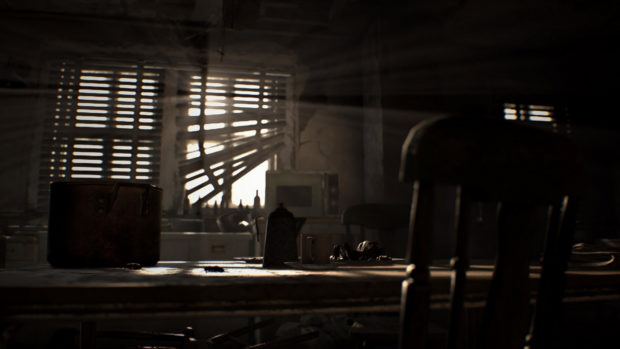 Resident Evil 7 with its change of direction was a very pleasant surprise at E3. Sony is backing the project and its VR feature with its PlayStation VR.

However, with VR comes issues such as headaches and nausea. After its E3 Demo we heard reports of reviewers feeling nausea. Speaking about the issue Resident Evil 7 producer Masachika Kawata said:

It’s a game you can experience on your choice of console and also an immersive experience in VR.

Looking at what others are doing with VR, if you want to deal with the comfort issue – because some people do get sick – the most extreme solution is to just not have people moving, to be fixed in place. We saw that with our Kitchen demo last year, when you are strapped down and other things go on around you.

That satisfies the needs of people who need to feel comfortable with VR, but it also limits the game for those who want a full experience. They want to get out into the game going on around them, so we challenged ourselves to make a game that lets them do that.

Apart from nausea, Kawata spoke of the game’s comparisons with P.T. According to Kawata, they were already in development when P.T surfaced. That means it was a mere coincidence that both games were similar in essence, at least the demos were.

P.T demo was never going to be a part of Silent Hills and Resident Evil 7 demo is not a part of the final game as well. Capcom was surprised to see P.T and Kawata jokingly said that his team was relieved to see P.T cancelled.

I’m worried about how my jokes come across but I hear Brits like black humour. So, out of everyone, we were the most relieved when PT didn’t come out.

We were already using a first-person perspective before anyone saw PT, so it wasn’t as if we saw that and decided to do the same. It was already happening, so were surprised and – seeing PT and the reaction, it was a signpost for us that it was a good direction to be going in.

Resident Evil 7 will release for PlayStation 4, PlayStation VR, and other platforms early next year. For more details on the game, stay-tuned!