RUMOR: Cyberpunk 2077 Will Release on September 30, 2017 – Bandai Namco Will Distribute In Europe 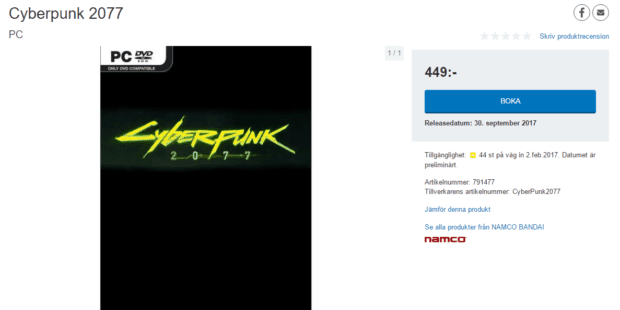 Cyberpunk 2077 is releasing on PlayStation 4, Xbox One, and PC next year, according to a Swedish retailer’s (komplett) website. The game is coming to all platforms on September 30 if the game’s listing is to be believed.

Cyberpunk 2077 is being developed by CD Project RED, the developer behind The Witcher 3 Wild Hunt. Their last game was distributed by Namco in Europe and same is expected to be the case with Cyberpunk 2077.

As you can see, Namco’s logo is sitting proudly under the listing which indicates that Namco is once again involved with distribution. Needless to say, we have to take this information with a grain of salt. CD RED is yet to confirm or deny this leak.

Whenever the game comes out, the producer is certain that it will be bad-ass. John Mamais spoke recently at The Game Awards 2016 and called Cyberpunk “really, really, really fucking bad-ass.”

Cyberpunk 2077 is expected to be a massive open world game and we hope to see Gwent like mini-games to keep us busy for a long time. For those who don’t know, Gwent is a popular card game within The Witcher 3 Wild Hunt.

The developer ended up working on a standalone Gwent game due to popular demand. We recently got a chance to speak with CD Projekt RED about Gwent: The Witcher card game.

We started getting tons of messages from them asking us to make a standalone GWENT game that would let them play it friends. Some even went as far as to build custom playing tables and real-life GWENT decks. So we decided to make the game and were making it because of the huge community effort.

For more on all things CD RED, stay-tuned!