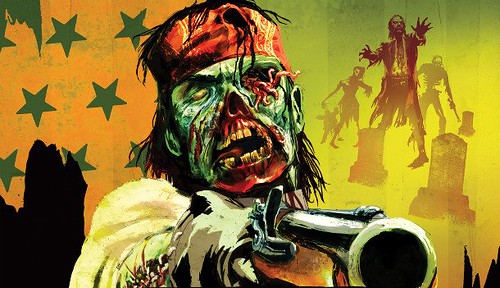 Red Dead Redemption Undead Nightmare features two basic classes, Undead Sharpshooter and Undead Hunter while Undead Treasure Hunter can be seen as a sub class to Hunter, my opinion. If you need assistance in getting the legendary rank, refer to the guide below.

Undead Sharp Shooter Rank#1
You have to kill 5 zombies in 10 seconds using a gun.
You will get it while clearing your first town Blackwater. Aim for the head and try not to get close, close up shots take considerable more time so are not recommended. You can use Cattleman Revolver for fast kills and reload times.

Undead Sharp Shooter Rank#2
You need to do 10 undead headshots in a row.
Aim for the head, using auto aim makes it more easy. If you miss any zombie in between your killing spree will bring back the score to zero, so be patient and precise. You can easily get this rank while clearing your first town, Blackwater.

Undead Sharp Shooter Rank#3
Kill 5 flaming undead in 1-dead eye Meter.
Use phosphorus from your menu, activate dead eye, mark 5 heads, shoot them, and you have the rank. You get the Phosphorus Coating during the normal story mode. Press SEL Go to Kit and scroll down to the phosphorus Coating to use the Coating on your Guns. Now, unleash this on zombies.

Undead Sharp Shooter Rank#4
Kill each of four undead types in 1 dead eye meter.
You can find all the four types of zombies just outside El Presidio, kill one of each and get this rank.
Zombie Types in Red Dead Redemption Undead Nightmare
Regular. Common zombie.
Retcher. Glows green, and spits acid.
Bruiser. Big ass fella, always charging.
Bolter. Moving around the other three.

Undead Sharp Shooter Rank#5
Get 5 undead sniper kills in 8 seconds and you can’t use dead eye. Save Pacific Union Railroad camp to get a sniper.
You can get this rank in front of El Presidio. Wait for the zombies to make a cluster, and then go for the kill. Doesn’t matter what type, you just need to take 5 kills in 8 seconds. Remember, you just need to kill it with sniper, don’t necessarily snipe them, you can kill them scope-less close range.

Undead Hunter Rank#1
Kill 100 Fresh Undead & 25 Bolters.
You won’t have any problem getting this rank, as these are the most commonly found zombie types.

Undead Hunter Rank#2
Kill 25 more Bruisers & 15 more Ratchers.
Clear a town, and just before you are close to fully clear it, leave the town and come back later and they will re-spawn again.

Undead Hunter Rank#3
Use a single explosion of a Ratcher to kill 2 other undead.
Mission you do for Nigel West Dickens, where you get an army uniform and have to take the train to go to Mexico. At roadblock there will be an army of zombies right in from of the train with a Ratcher(Glowing green) in the middle. Shoot him to get this rank.

If you have somehow missed this opportunity, you can always clear a town and get a Ratcher to blow other two undead.

Undead Hunter Rank#4
You need to kill 2 undead bears, 5 undead wolves and 3 undead cougars using a torch to get this rank.
Get the horse Pestilence, stay away from zombies, and run around the animals using a torch on them. Nice and easy!

Want to level up fast as Undead Treasure Hunter? You will need to find these treasure maps quickly.

Share with your tips to level up fast in Red Dead Redemption Undead Nightmare.