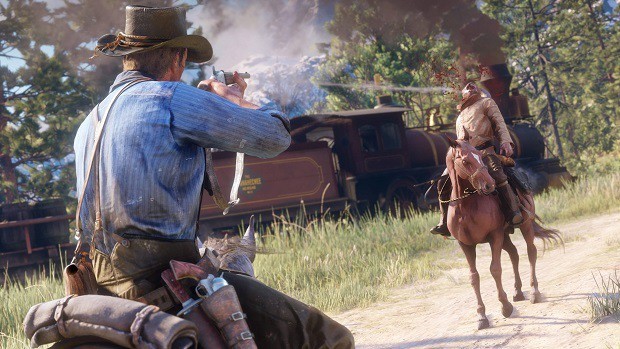 Living dangerously and constantly on your toes is one of the thrills in Red Dead Redemption 2. Be it constant threat from lawmen or ruthless bounty hunters, you need to have performed some vile activities that put you on their radar. Below, we take a look at how the Wanted System of Red Dead Redemption 2 works.

How the Wanted System Works in Red Dead Redemption 2

With a tad bit more realism added over GTA V’s Wanted System, now almost no crimes will go unnoticed regardless of how minor they may be in nature.

Everything from killing an innocent civilian to shoplifting to knocking someone over by your horse will be held accountable by the law.

The Wanted System in RDR2 is quite complex. Whenever you commit a crime, a chain of events will begin that can branch to different paths depending on how you decide to behave.

When you commit a crime, it can either be spotted directly by a lawman or reported by a witness to one. Once that is done, you will be actively pursued in the town you committed the crime. Active pursuit is the first phase of the entire process.

This situation will be indicated by the big and prominent letters of the word ‘WANTED’ in the top right of the screen. Getting away from these areas will slowly grey out the letters of WANTED.

Once it depletes fully, the active pursuit by the lawmakers will stop. The second passive phase will start.

The town will continue to remain a potentially hostile area for you depending on the severity of the crime, the bounty on your head, and the Wanted Level.

You will face an increased number of lawmen and bounty hunters along roads and checkpoints. If any lawman in the region spots you in this passive phase, it will revert back to the active phase.

Depending on the nature of your crime, different amounts of bounties will be added. The wrongest you can do is to kill a lawman or an officer. You’ll rack up bounty quite fast that way.

The bounty has a cap for various Chapters though. It is limited to $300 during Chapter 2, $500 during Chapter 3, and then jumps to $1,500 after “Sodom? Back to Gomorrah” towards the end of the same chapter.

Bounty as a whole stack up. Each type of crime you commit has its own bounty ranging from $5 and going all the way to $50 depending on the severity of the crime.

If the previous bounty hasn’t been reclaimed, any additional crime you commit will add to your total bounty. The bounty amount is generally tied to crime Severity as well.

You can pay your bounty at any Post Office located in train stations which will reset the wanted system in a region. The wanted system, however, is reset only for that region, as each state in the game has its own independent wanted and bounty levels.

Your Wanted Level is never shown in the game but it is still measured and an important system to understand. The Wanted Level is directly tied to the amount of bounty you have on your head.

There are five Wanted Levels, each triggered when your bounty goes beyond a specific threshold.

At Wanted Level 1, a red outline appears around the town where you were spotted committing a crime. A red outline is displayed around the corresponding state as well.

As your level goes up to 2 and 3, you will face more dangerous reinforcements and bounty hunters in the towns as well as the wilderness.

Reinforcements only arrive if your Wanted Level is 2 and 3, which often requires resisting the lawmen and killing them. The type of reinforcement depends on the town you are in. They are as follows:

Valentine, Rhodes, and Strawberry – You will face deputized citizens and town mobs throughout all major conflicts with the law.

Cumberland Forest and Scarlet Meadows – Bloodhounds of varying numbers (depending on crime severity) are dispatched to chase you.

Annesburg, Blackwater, Saint Denis, and Tumbleweed – Marshals on horseback chase you once you accumulate a large bounty.

Lockdown is a special sub-feature of the wanted system in RDR2 that will practically disable an entire town if you have a very high Wanted Level or commit a certain amount of distinct high severity crimes.

If you have a very high bounty and/or commit 12 distinct high severity crimes within 60 minutes, the town you committed these crimes in will go into lockdown.

All local shops and events will be inaccessible, and lawmen will fortify the area by posting additional mean patrolling the town. The moment you are spotted by any lawman, you will become wanted and an active pursuit will ensue.

A locked down town will only reset back if sufficient time has elapsed (350 in-game minutes), you have died, or you have paid your bounty. A town that is in lockdown is shaded red.

Certain areas in the game such as the Sisika Penitentiary and Fort Wallace are in permanent lockdown. Other lockdowns can last longer or cover an entire area after specific story missions.

A crime’s severity not only influences how much bounty you have to pay but also how easy or difficult it is to get out of a situation. Crime severity is either Low, Medium, or High.

Crimes with low severity include cheating, disturbing the peace, trespassing, vandalism, and more. Such crimes will increase your bounty usually by $5 each.

However, because their severity is low, you have the possibility to defuse the situation when lawmen confront you.

If you play your cards right, you will be given a chance to move along without any real consequences other than an increase in your bounty.

If you do not leave as permitted or attempt to antagonize the lawmen during the interaction, the severity of the crime will automatically be bumped up, which will lead to arrest or combat.

Committing medium and high severity crimes will not grant you the same treatment from the authorities. They will likely point your gun at you, which can lead either to surrender and incarceration, combat, or fleeing.

When you commit a crime, there may be a civilian witness nearby who’ll try to report the crime to the authorities of law. If they succeed, an active pursuit will commence. Your job will be to prevent that from happening.

The witness is indicated by a red eye icon on the mini-map the moment he/she spots you. You can run after the witness to catch them.

Once you have caught them, you have multiple interaction options to convince them to forget what they saw. You can either threaten them, beat them, intimidate them, or outright kill them.

Not all witnesses will behave the same to threats or physical assault, so you need to make sure you keep an eye on them even after you think you’ve threatened them enough.

There is also a possibility that you commit a crime and no witness is there to spot it. In this case, the crime remains unknown by law forces and goes unpunished. It also means your bounty remains the same.

A witness can also come across a cadaver or a crime that they may have not seen happen live.

In such a case, they will report the crime to the authorities but you may or may not be clearly identified depending on your proximity to the crime when the witness investigates it.

While staying to fight with the authorities can be fun and rebellious, it’s not the smart way to play.

Fighting authorities at higher Wanted Levels and in areas where hounds and Marshals can chase you can become extremely difficult and consume a lot of resources.

For this reason, fleeing is generally the best option you have. When an active pursuit is triggered, you can opt to flee from sight.

Once you are out of sight of authorities, a red circle will engulf a certain part of the mini-map. You can get out of this red area to deplete your Wanted gauge and eventually end the active phase.

Another option you have is surrendering. You can do this by holstering your weapon immediately after committing a crime to remain peaceful. Choose the defuse option in a conversation with a lawman.

If the severity of your crime is low, you will likely just be asked to move along. If your actions were serious enough for the lawman to point his gun at you, you can surrender and be incarcerated.

The penalty increases with every death within 1 hour of gameplay.

The first time you die the penalty is 5%. The second time within the same hour it jumps to 7%. The third time it is 10% and can go all the way up to 20% or $150 (whichever is lower) if you die six or more times within one hour.