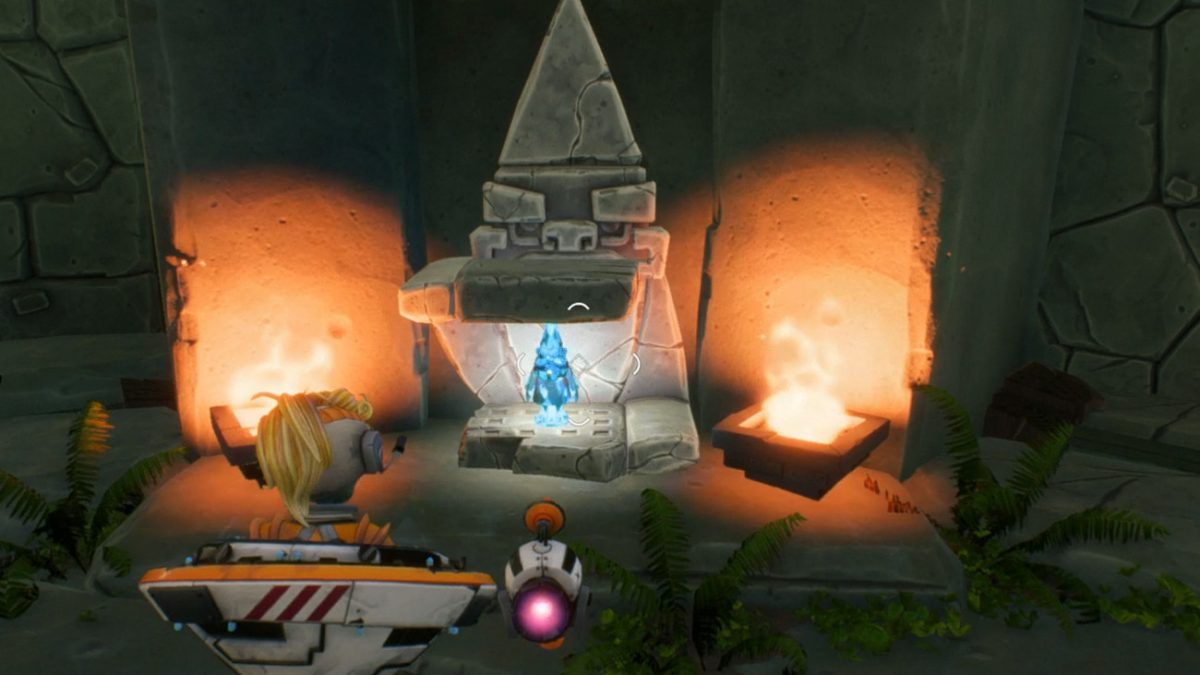 Note that collecting a Golden Gnome isn’t always a matter of simply locating it, in certain cases, you’ll have to complete a trial or solve a puzzle in order to obtain it; don’t worry, this guide will talk about that as well.

Gnome #1
The first Golden Gnome can be found in Town Center, next to Private Warren (who’s near a double door entrance; there will be a potted plant and a bush nearby, the Gnome is between them.

Gnome #2
On your map you’ll see what appears to be a well (it can be seen right above where you found the first Gnome). In this area you’ll see many cars. You’re specifically looking for a crashed, red car that has smoke coming out of the engine; the Gnome is in the driver’s seat.

Gnome #3
On your map, close to the location of the first Gnome, you’ll see the symbol of a lawnmower; go to that area. There will be a large tree there that you must scale. At the top of the tree there will be a kiddie pool; the Gnome is inside the pool.

Gnome #4
Take the road leading to Up-Down-Uptown and remain on the left. Along the way you’ll see a road to the left; go there and continue until you come across a green garage. The Gnome is inside the garage, on top of a sofa.

Gnome #5
Look on the map and search for a Lawnmower symbol opposite of where you got the previous Gnome. In this location you’ll have to participate in a race; you may have to do this a few times. Along the track you’ll see many Golden Gnomes, collect all of them, and if you successfully do so a final Golden Gnome will spawn – the one you’re looking for.

Gnome #6
Slightly northeast from the race track, you’re searching for an area with red and green train carts. Get on top of the green cart, jump over to the red cart and you’ll spot a scaffolding; the Gnome is on top of the scaffolding.

Gnome #7
Slightly north of where you got Gnome #6 (only a few meters north, not all the way) you must go to the top of a building, on which there is a small cabbage patch; there will be a poster of ‘Greasy Moon Diner’ on the building next to it. Betwixt the cabbages, in the dirt, you’ll find the Golden Gnome – you must dig him out.

Gnome #8
Towards the most northeast part of the map, you must go to the top of a white building. There, you’ll have to participate in another race that functions the exact same way as the previous race – collect all the Golden Gnomes on the track to get your hands on the actual one.

Gnome #9
On your map, on the east most side, look for the symbols of a lawnmower and a treasure chest. Another race track and the exact same method as for Gnomes #5 and 8. Complete the track to get the Gnome.

Gnome #10
Close to Pressure Pier, board the beached ship; the Gnome is nestled in a bundle of rope.

Gnome #11
West of where you obtained Gnome #4, take the road and remain on the right side. You’re looking for a yellow van, directly above the van, on the escarpment, you’ll spot the Gnome. To reach it, there are a set of platforms that begin a few feet further from the van.

Gnome #12
Towards the west most part of the map, along the curved road next to the treasure chest, you’re searching for a small waterfall on the left side. The Gnome is hidden behind the miniature waterfall.

Gnome #13
Further up north from where you obtained the previous Gnome (the northwest part of the map). You’re looking for a white van; once you’ve located it, move further ahead until you see a garage door. Next to this door, in the bushes, the Gnome is tucked away.

The previous Golden Gnomes could just be obtained by simply locating them or completing a race track, however the remaining the Golden Gnomes only become available once you’ve completed certain tasks.

Gnome #14
You must head to the sewers. This may be a bit tricky to explain but the location of the sewer is in the exact opposite side of the map as the race track where you obtained Gnome #8. Before heading into the sewers, you must have 200 Tacos. In the sewers you’ll find a lone toilet; flush all the 200 Tacos down to obtain the Gnome.

Gnome #15
A few meters north of where you obtained Gnome #12 (the west most side of the map) you will come across the KPVN Tower. On the radio tower you will see a red target; shoot it. Doing so will spawn a switch outside the walls near the tower. Flip the switch and enemies will spawn near you. Defeat all enemies on the ground and all the ones on the roof of the building. Once you’re finished, return to the switch and collect the Gnome.

Gnome #16
Above Sundrops Hills, near the giant squash, get on the wooden pier with the telescope. Across from you you’ll spot a waterfall. Look closely and you’ll see a switch to the left of the waterfall; shoot it and the Gnome will appear right next to you.

Gnome #17
Slightly northeast from where you obtained the previous Gnome, near the Giant Squash, you must shoot a switch across the river, on the mountainside. Doing so will spawn the same kind of switch from before (Gnome #15). You must feed the switch 10 Tacos, this will spawn a set of platforms and you must complete the ensuing track in order to obtain the Gnome (which will spawn on top of the switch).

Gnome #18
Close to the center of the map (slightly south) you will find a Snapdragon. The button is directly behind the creature, shoot it and you will spawn two monoliths. Both monoliths’ tops can be rotated – the tops have symbols on each sides. You must move the symbols until the monoliths are facing one another with the same symbol. Doing this will spawn the Gnome on top of some golden boxes.

Gnome #19
On the north most side of the map, left of the museum, look for a building with vents. Follow the vents and look for a button next to it; shoot it and a switch will spawn and you must feed it 10 Tacos. A series of Gnomes will spawn but you must ONLY destroy the Yellow Shooting Gnomes. Killing any other gnome will restart the whole challenge and you must feed the switch 10 more Tacos. Once the Yellow Gnomes have been dealt with, the Golden Gnome will switch on top of the switch.

Gnome #20
Close to the previous Gnome, head south to the museum and walk through the entrance. On the inside, right above the entrance, shoot the button. 6 switches will spawn and, similar to how you solved the puzzle for Gnome #18, you must rotate the tops until the symbols match one another. Once completed, the Golden Gnome will spawn above the gazebo in front of the museum.

Gnome #21
Close to Pressure Pier, on the beach, look for a turtle statue. Jump on top of the statue and look for a bird’s nest. Continuously shoot the bird’s nest, there is a hidden button there. Eventually you’ll hit the button and the Golden Gnome will spawn a few feet from you.

Gnome #22
Slightly below from where you picked up Gnome #10, you’re looking for a Cliffside. There will be a button on the Cliffside, hitting it will spawn 4 switches. You must rotate the tops until the symbols match one another. The Golden Gnome will spawn behind one of the rocks, next to a pair of oars.

Gnome #23
Further down the beach, slightly east from the previous Gnome. Look across the ocean towards the island, you should be able to spot a switch; shoot it and another switch will spawn. Feed the switch 10 Tacos and a ring will appear before you. Several Exploding Gnomes will attempt to enter the ring, you’re task is to prevent them from doing so. There is a margin of error, allowing at least 9 Exploding Gnomes from entering the ring without you having to restart, but if a 10th gets it, you must restart the whole endeavor. The Golden Gnome will appear above the switch.

Gnome #24
The final Gnome can be obtained from the docks on the east side. Near the water, below the dock and next to some rocks, you’ll spot the button that you must shoot. Once you’ve done so, the final Golden Gnome will appear on the dock.