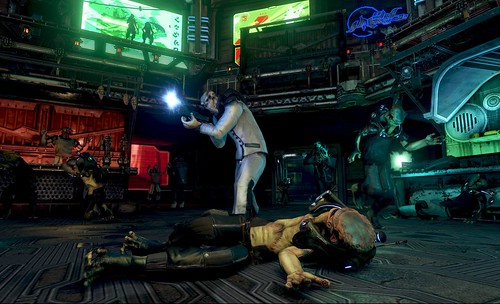 Game Reactor and Joystick had a detailed preview of sequel to Bethesda’s first person adventure game. In the detailed features in these magazine were all the details, every fan would want to know about the game.

The protagonist of the game is Killian Samuels, a bounty hunter. Prey 2 has been in development for three years with Xbox 360 as the main platform, though PC and Playstation 3 versions are also in development. I don’t know what they mean by Xbox 360 as the main platform for the game but that does indicate a possible delay for other platforms? a timed exclusivity? anyway that’s where the speculation ends.

Prey 2 visuals seem to be a mix of Bioshock and Mass Effect, and if the first screenshot and artwork is to go by, it does look like Mass Effect finding Bioshock in Prey 2. The gameplay of the game is heavily inspired by Mirror’s Edge, Mass Effect, Chronicles of Riddick, and Blade Runner said the producer of Prey 2. Moreover, it will feature a loot system similar to Borderlands.

Game Reactor notes; Killian is as flexible and limber as Faith of ME, leaping over heights, hanging by arms from pipes, balancing on thin boards and jumping like a cat upwards structures. Prey 2 will feature a Killzone style cover system with the flexibility in battle that reminds you of Vanquish.

It has the moving scheme from Mirror’s Edge, the freedom of Mass Effect and the fire fights of Killzone 2. Joystick feature indicates that there will be vag portals, but fewer of them and with different looks. The side quests of the game are similar to Red Dead Redemption meaning that there will be core storyline but the way you settle the side missions will shape up your character.

Prey 2 will feature missions like infiltration, shadowing, and murder contracts. Since you’re a bounty hunter, one can ask you to kill a prey, but that prey could ask you to kill instead the one who sent you, in return for money. The creative director of Prey 2, James Sumwalt says the size of the area (of missions) is as Rome in Assassins Creed: Brotherhood.

Moreover your actions will influence your reputation similar to Red Dead Redemption. Moving towards the story of Prey 2 developer states; If the first Prey was the Luke Skywalker version of the story, Prey 2 is Bobba Fett’s story.

Game will combine the gameplay elements from all these games to provide the most engaging experience in open world environment. That said, there is no multiplayer, 3D, Kinect or Move support for the game. It seems the focus of the developer is to provide a good single player adventure.

Leaving MP and these extra features will provide developers the extra time to focus their energies on the singleplayer aspects of the game, making it more adventurous as the producer of Prey 2 puts it.

Prey 2 will use a level up system to unlock/upgrade your armor, weapons and abilities that you can use against your enemies. Players will use money to upgrade/purchase these items that they can use in-game. Players will also have the option to customize their weapons.

Prey 2 is being developed on upgraded Id Tech Engine 4 so you can expect good graphics. I am quite reluctant to give my opinion on something as ambitious as Prey 2, but if the developer succeeds in mixing all these gameplay variables and gel them together in a single game, we have a blockbuster coming our way.