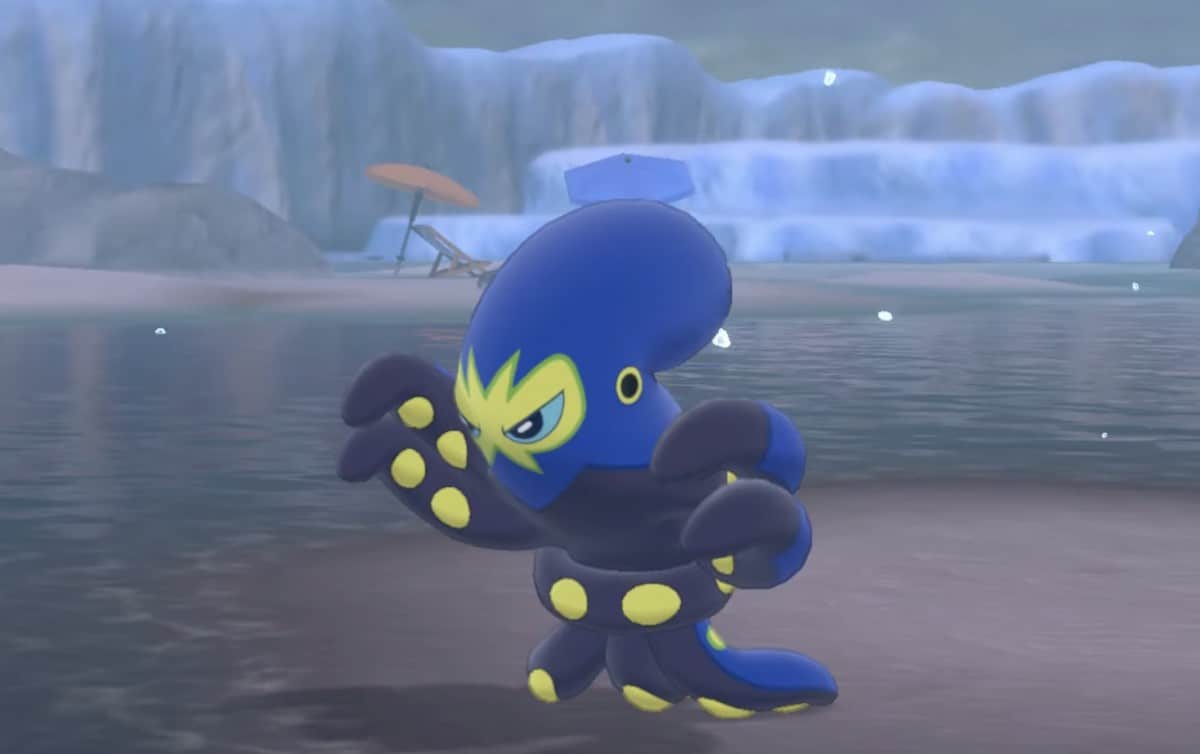 This route is quite cold, the snow keeps falling as you embark on a new route. Simply cross the bridge near the fishing area, and you’ll find a trainer near the water known as Fisher Harriet.

This trainer is looking for a battle and sends out two of the strongest Water-Type Pokemon: Baraskewda and Lanturn, both at level 39.

Water Types are weak towards Grass and Ground; therefore, use a Grass-type to cause damage. Don’t use an Electric Type in this battle as an Electric move can increase the HP of Lanturn, due to its Volt Absorb ability.

Once you’ve defeated the trainer, walk down the path. There’s a Max Potion inside a tall patch of grass on your left. Obtain the max potion and keep moving south till you encounter another trainer on your way.

Head even further towards the south and you’ll find the old chap that rewarded you with a Rotom Bike after you saved him from Team Yell. He’s got himself in trouble again as he’s being harassed by the Grunts. You’ll have to defeat the Grunts and save the poor guy.

Step any closer and you’ll reach the biggest area of Route 9, Circhester Bay.

Route 9 – Circhester Bay
Once you try to save the poor chap from the hands of The Grunts, they’ll challenge you in a battle. The initial two Pokemon you’ll face will be a level 39 Linoone, a Dark/Normal-type and Pangoro, a level 40 Fighting/Dark Type.

Show aggression when fighting these two, use fighting attacks on them as they’ll be very effective here. Be sure to watch out for Pangoro’s Bullet Punch, it really hurts!

Every good deed has a reward and by saving the old guy, you’ll be rewarded by an update for the Rotom Bike. The thing that makes this update so special is the ability to ride through Water. There’s no effort needed when riding through water. Just hop on the bike and into the water, the bike will automatically transform.

Don’t go forward into the water yet. Visit the bridge of the route and swim to the very end towards the path going in the south, there’s a unique surprise laying around for you there. You’ll find a TM64 Avalanche heavily guarded by a higher-level Glalie.

Now, back to where you saved the old guy from the grunts. From here, you now want to jump in the water from the left entrance, and here, you will find yourself a Zoom Lens.

As soon as you use the second exit to get to the water, you will notice that the area is massive and this means that there are a lot of items hidden all across the area. We will start exploring the area by turning left first and work around the entire area. There’s an opening in the ice just above you. You’ll find a hidden Pearl on both sides (right and left) of the opening.

There’s a small path going towards Max Revive, South from the hidden Pearl. On the far-left side, you’ll find a trainer Black Belt Carter. This trainer sends out Grapploct. Grapploct may look like a Water Type, but don’t mistake it as one.

It’s a pure Fighting Type. Use a Psychic, Fairy, or Flying attack to deal a great amount of damage.

As mentioned before, this part of Route 9 is meant to be explored due to the variety of items you find. Behind the trainer, there’s a Black Belt. Take it or leave it!

From the trainer’s area, head to the south and find a couple there that are dressed in beach attire. Yes, you heard right. In beach attire in the freezing cold. The lady will present you with a TM45 Dive just for chatting. There’s also a fishing spot in the beach area where you’ll find three Dive Balls.

Once you’ve done chatting with your buddies, go all the way right ignoring the small passageway between the rocks to the south. There you’ll meet your next trainer, known as Black Belt Reece. This trainer has two Fighting Types: Sawk and Throh. Use Flying, Psychic, or Fairy attack on these two.

If you want you can head right from the Never-Melt Ice to find Fisher Marina. They will use Qwilfish, best countered with a Ground type or Electric type pokemon, and Pyukumuku, best countered by an Electric-type or Grass type pokemon. Move a few steps to the north of Fisher Marina and find an Ice Stone on the left, and to the right is a hidden Pearl Sting.

There is a Big Hidden Pearl on the north. With all this collected, head down south, you’ll find Swimmer Jacob who only has a Cloyster; that can easily be taken out with a Grass attack.

Go right from the swimmer to a sign and find a Protector. Now, head back to where you fought the Swimmer and from here, you need to move south, near the line of rocks until you find Swimmer Scarlett. Scarlett sends out three Water-Types, Remoraid, Octillery, and Mantine. Take them out by Grass attacks.

You’re not finished here; there is much to explore. Return to the previous area and swim towards the left side. You’ll find many collectibles there.

Stick to the North side and you’ll find Swimmer Logan. He sends out two fish like Pokemon, Wishiwashi and Wailord. Both of Logan’s Pokemon are super weak to Grass Types. Once you’ve defeated the Swimmer, take a look at his right and find a hidden Normal Gem.

Keep surfing on the left and reach the other side of the passageway that you ignored earlier. If you’re not in a hurry then you can fight the Grapploct or you can simply go left to find TM22 Rock Slide on a small beach.

At last, you can move to the south and reach your next location in Pokemon Sword and Shield Route 9, Outer Spikemuth.

Route 9 – Outer Spikemuth
You’ll find a Swimmer on the beaches of Outer Spikemuth. Don’t worry, she’s a normal one at least she dresses according to the climate. She possesses a Toxapex, which is a Poison and Water Type. Use Electric, Ground, or Psychic against it.

Be careful when fighting this Pokemon, it has a hidden ability called Regenerator, meaning it restores 1⁄3 of its maximum HP when switching out.

Look for a hidden Big Pearl on the left of this beach, and find another on the right. Also, look for three rocks on the right, you’ll find a Max Elixir between them. Go on the grassy area and move to the left side of the corner to find the Scope Lens.

There’s a berry tree ahead, but you’ll have to face Music Crew Owen and Andrea to get there. For the Toxtricity, an Electric and Poison-type, Ground attacks can do wonders. And on Maractus, a Fire attack is enough.

There are three hidden Dire Hits on the crates, head to the North of Spikemuth gate to find them. Once you reach the Spikemuth gate, Marnie will signal you to move South. On the left of the building, you’ll find three hidden Guard Specs

Interact with Marnie and battle her again. She is a gentle lady, therefore, she allows you to heal up and recover your Pokemon. Use Fighting attacks for Morpeko, Scrafty, Liepard and a Flying attack for Toxicroak.

When you’ve defeated Marnie fair and square, she’ll let you in the Spikemuth Gym through a different entrance.