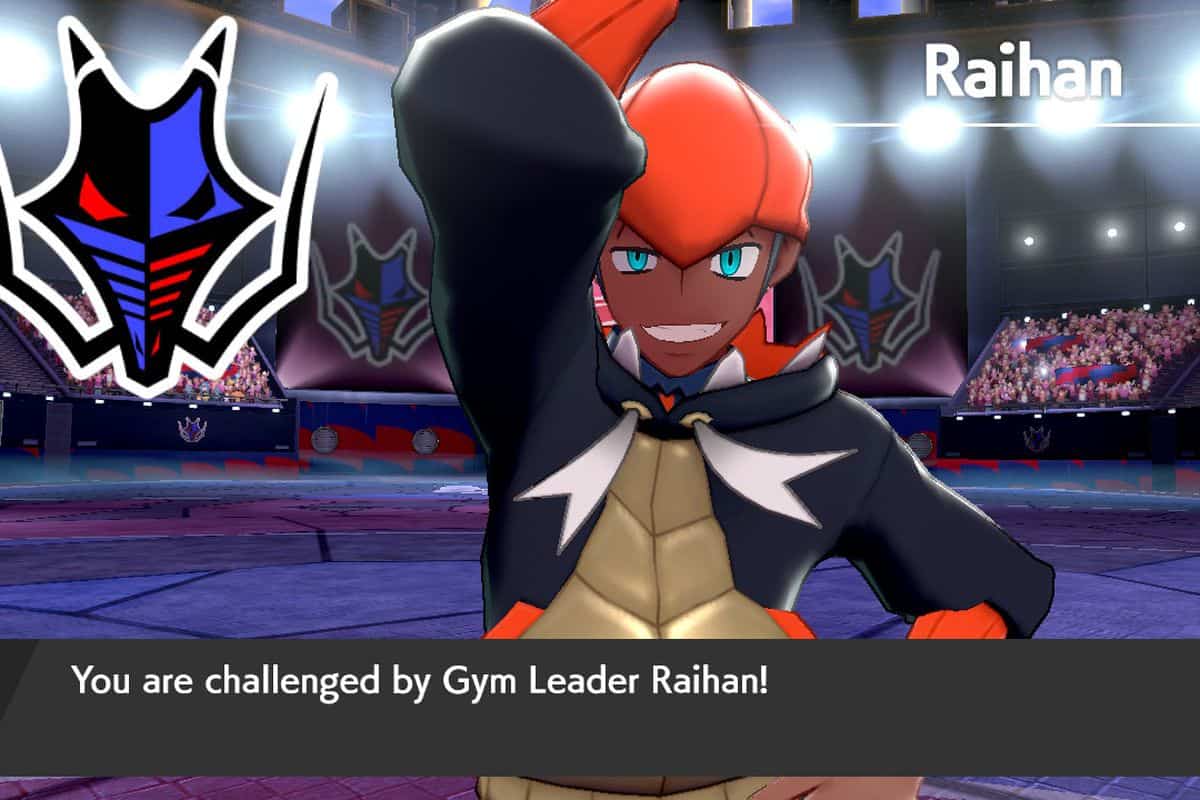 Raihan is the final Gym Leader and as such, he will pose the greatest challenge. This is illustrated in his choice in Pokemon Type – half of his Pokemon are Dragon-Types! You’re in for quite the battle.

Dragon-Types, like any other Pokemon Type, have their Achilles Heel. Certain Pokemon Types that have the power to decimate even the most powerful of the Dragon Types. However, before we get to that, let’s briefly go over the way in which players can reach Hammerlocke.

Reaching the Hammerlocke Gym
Get on Route 9 and start biking your way to Hammerlocke. You’ll know you’re on the right path when you eventually near a tunnel. As soon as you enter the tunnel you’ll find that there’s a crowd of people. Get off your bike and cut through the bustling crowd. This will trigger a cutscene.

After the cutscene ends, you’re free to move around town. Heal your Pokemon at the Pokemon Center and make your way over to the Gym to earn that Dragon Badge.

We advise all players to spend a great deal of time leveling up their Pokemon. Raihan’s Pokemon are all close to Level 50, and if your Pokemon aren’t near that level, you’re unlikely to beat the Dragon-Type Specialist; in fact, you may not even get past the Trainers that are under him.

Recommended Pokemon
To reiterate, Gym leader Raihan has Dragon-Types as part of his repertoire, therefore you’ll want Pokemon that prove to be hard counters for his selection:

As stated earlier, Raihan’s Pokemon are all close to Level 50, so it doesn’t matter if you have Pokemon that are more effective against them, if they’re under-leveled then your chances of winning are close to nil.

For the upcoming battle, we recommend that you make an earnest attempt to capture Pokemon such as Gardevoir, Pangoro, and/or Corviknight; their power will prove to be your greatest asset!

Recommended Items
Seeing as this is the final Gym Leader, it wouldn’t hurt your chances if you invested a bit of your hard-earned money on items such as Potions, Super Potions, and Full Restores. Alongside this, a Paralyze Heal will aid you tremendously! Make sure to at least have a few on you before heading into the Gym.

Try not to use any of it during the Gym Challenge, it’ll just be a waste, and you can’t afford to waste anything when up against Raihan.

The Hammerlocke Gym Challenge
Raihan’s Gym Challenge is the most straightforward out of all of them. You must take part in Pokemon Battles against the Trainers under Raihan. It’ll be a two-on-two fight, meaning both parties will send out two of their Pokemon at once.

As you can see, even the Hammerlocke Gym Challenge is far more difficult than anything you’ve done prior to it. To win these fights, target a single Pokemon and unleash quick, rapid-fire attacks that swiftly take the target out; then focus on the remaining Pokemon.

Make sure to heal your Pokemon at the Pokemon Center after completing the challenge, you don’t want to challenge Raihan with weakened and fatigued Pokemon.

Gym Leader – Raihan
Raihan has the following Pokemon at his disposal:

Like the battles in the previous Challenge, this will be two-on-two battles, so you’ll need to be extra careful so that you don’t fall into any one of Raihan’s traps.

Gigalith and Sandaconda are not Dragon-Types, so be sure to send out Pokemon that can counter them in whatever way they can.

Raihan will commence the battle by sending out Flygon and Gigalith; the latter will unleash a Sandstorm that’ll raise the opponent’s Special Defense. An Ice-Type Pokemon is highly effective against Flygon – if you have one in your arsenal, call it out and take Flygon down as quickly as possible. Conversely, Gigalith is a Rock-Type Pokemon so a Fighting or Water-Type will make quick work of it (assuming they’re on the appropriate level to do so).

The first set of Pokemon can be quite devastating if you don’t have the right Pokemon to deal with them. The strategy is to use Base Attacks to take out Flygon as quickly as possible, then diverting your entire attention to Gigalith.

After those two, Raihan will send out Sandaconda and Duraludon. Sandaconda can use Glare, which can paralyze one of your Pokemon; this is where the Paralyze Heal will come in handy!

An Ice-Type attack can make short work of Sandaconda; if you don’t have one then have both your Pokemon attack Sandaconda to get it out of the equation.

In the end, you’ll have to face off against Raihan’s strongest Pokemon: Duraludon. He will use a Dynamax on Duraludon, so you’ll need to counter with a Dynamax of your own. If you have a Fairy-Type on the battlefield, swap it out with a Ground or Fighting-Type (anything other than a Fairy-Type). Dynamax one of your Pokemon and begin the final battle.

Try to wear down Duraludon, force him to revert to his original form and hit him with a flurry of powerful Ground and Fighting-Type moves! Use your items if you need them but make sure none of your Pokemon faints; Raihan won’t hesitate to take advantage of any momentary setback.

Hammerlocke Gym Rewards
You will be given the following Rewards for beating Raihan: