Pokemon Sword and Shield Dragapult Locations, How to Catch and Evolve 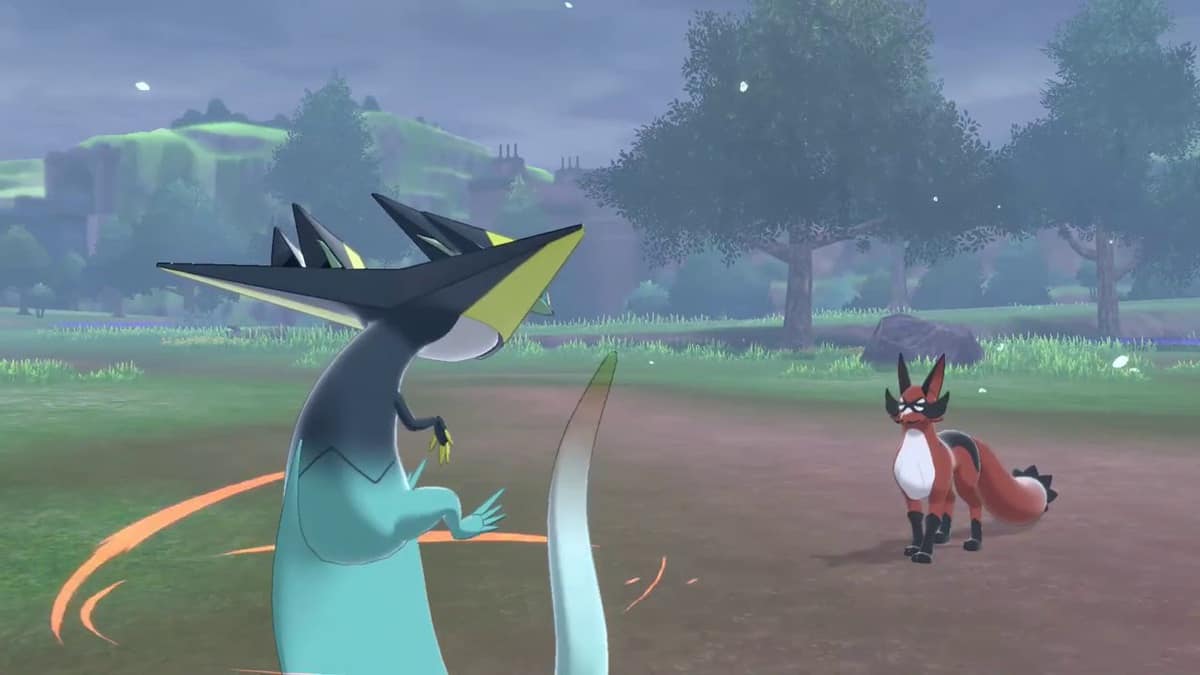 You can’t catch Dragapult in Pokemon Sword and Shield.  You can only get it by trading its preceding evolution, Drakloak. Once you catch a Drakloak, and bring it to Level 60, trading it will cause it to evolve into Dragapult.

Drakloak Location
You can find and catch Dreepy and Drakloak within Lake of Outrage. Drakloak has a 1% spawn chance during Overcast between Level 55-58, while Dreepy spawns at Level 50-52.

Once you have a Drakloak, and it levels to 60, trading it will cause it to evolve into Dragapult.

Dragapult Strengths and Weaknesses
Dragapult is a Dragon and Ghost Type so he is vulnerable against Ice, Dragon, Fairy, Ghost and Dark types. E.g: Tyranitar, Hydreigon and Goodra.

Cursed Body: Might disable a move used on the Pokemon

Infiltrator: Passes through your foe’s barriers and attacks

Following are some of the moves Dragapult can learn as it levels up.

Dragon Breath
Dragapult can learn this move by reaching Level 1. One of the most initial yet best moves players can make their Pokemon learn. It deals decent damage to the opponents and has a 30% on paralyzing them. However, it’s to be kept in mind that Electric Pokemons with Limber ability or who are behind a Substitute can’t be affected by this move.

Moreover, while holding Dragonium Z, this move shifts to Devastating Drake with base power 120.

Phantom Force
Dragapult can learn the Phantom Force Move by leveling up to Level 48. This is one of the best moves to learn because when it’s active, it grants the players to disappear for the first turn making the opponent unsure of their location in the field. In addition, it makes you invulnerable to any attacks advanced by your enemy.

As the second turn approaches, this move deals damage and uses the Protect or Detect moves to elevate the combat. Moreover, when Phantom Force is used with Ghostium Z, it shifts to Never-Ending Nightmare, and the base power reaches 175.

Dragon Rush
Dragapult can learn the Dragon Rush move by reaching level 63. Upon using this move, users provide massive damage to opponents and also have a 20% chance of making them flinch. However, it’s worth mentioning that Pokemon that possesses the Inner Focus or behind a Substitute can’t be affected to flinch.

Dragon Rush will ignore accuracy and provide double damage on the field if it is used with Minimize. Moreover, while holding Dragonium Z, this move converts into Devastating Drake with a base power of 180

Following are some of the Technical Machines compatible with Dragapult and their functions.

TM23 Thief
When this move is used, it deals decent damage to the opponent and steals their held items. It is to be kept in mind that items that players steal from the Wild Pokemon can be kept after the combat is over; however, Trainer’s Pokemon items are returned after the battle.

Moreover, all items stolen during Linked Battles are also returned to their owners. Therefore, players can only activate and use these items during the battle to provide damage to their opponents. Also, consumed items cannot be stolen but can be consumed normally. And Sticky Hold Pokemons also are not influenced by this TM move.

While holding Darkinium Z, TM23 shifts to Black Hole Eclipse with base power 120.

TM45 Dive
Upon using TM45, players can go underwater and hide there on the first turn. This will allow them to vanish for a while and seek shelter from all the attacks being advanced on the battlefield. Whereas for the second turn, this move will be dealing damage.

Using this move while holding Waterium Z, turns it into Hydro Vortex with base power 160.

TM77 Hex
Upon using TM77, it inflicts damage to the opponent during the battle, but if they happen to have burned, poisoned, paralyzed, asleep, or frozen status ailment, they will power up by 130.

While holding Ghostium Z, TM77 converts to Never-Ending Nightmare with a whopping base power of 160.

Following are some of the Technical Records compatible with Dragapult and their functions.

TR84 Scald
It deals decent damage to the opponent while being present on the battlefield and has a 20% chance of burning them. Although it is a great move, it fails to inflict damage to Pokemon with the Water Veil ability. This ability can be used to thaw frozen enemies and then attack them.

While holding Waterium Z, this move turns into Hydro Vortex with a base power of 160.

TR51 Dragon Dance
This move enables the players to boost their attacks and speed—a highly beneficial move when you may encounter a pokemon on a stronger level than you. Additionally, stats are raised by +6 each stage.

While holding Dragonium Z, this move boosts up to Z-Dragon Dance and diminishes any possible stat drops applied to the user.

TR 15 Fire Blast
It provides a good amount of damage to your enemies while present on a combat and has a 10% chance of burning them. However, this move does not inflict damage to Pokemon with the Water Veil ability. While holding Firium Z, this move can be turned into Inferno Overdrive with base power 185.