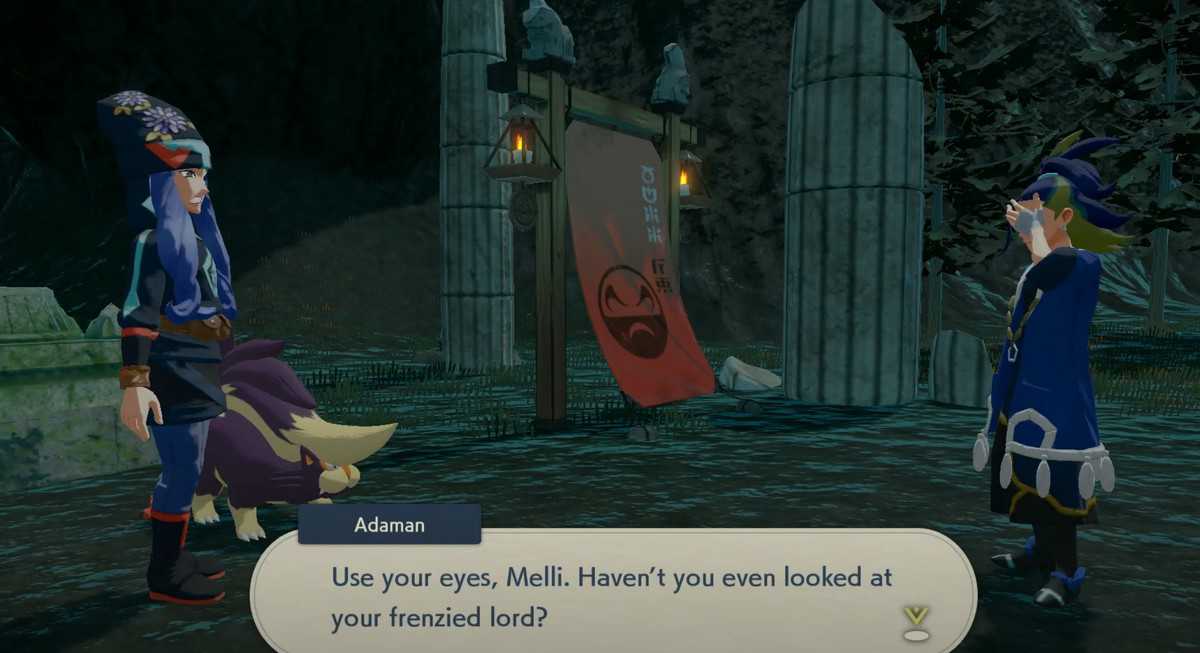 This guide will cover the Scaling Perilous Heights main mission in Pokemon Legends Arceus. In addition, we will discuss the locations that you will visit throughout the mission and battles against other Trainers and Pokemon.

Scaling Perilous Heights is the eleventh main mission of the Pokemon Legends Arceus story campaign, where you need to travel to Coronet Highlands and battle Electrode to quell its frenzy.

To begin your journey, head to Commander Kamado’s Office. You will meet Adaman and Melli at the office, where Melli will tell you to battle against Adaman to show what you’re capable of.

Adaman will use a Grass and Normal-type Pokemon in the battle against you. One is a Grass-type Level 36 Leafeon, and the other is a Normal-type Level 18 Eevee.

The fight can be dealt with easily by using any of your strongest Pokemon. After you have defeated Adaman, head to Captain Cyllene’s office.

Before you start the mission, make sure you are ranked Four Star to take part in the mission.

Head to The Training Grounds

Make your way to the Training Grounds and meet with Irida and Warden Ingo. They will ask you to head to the Coronet Highlands to battle Electrode.

Begin your journey to the Coronet Highlands with Warden Ingo. Then, start traveling to the top of Mount Coronet where you will have to go through the Wayward Cave.

Inside the cave, follow Warden Ingo as it will be completely dark, and you will not be able to see anything. Once at the top, you will be forced to fight against Melli to go any further.

Melli will pull out a Level 40 Skuntank in the first fight against him. However, this will be relatively easier than the second battle, as you will be only facing one Pokemon.

The recommended Pokemon to use against Melli are Snorlax, Golem, and Steelix. Use any of the three Pokemon in the first battle and use strong Ground-type attacks to defeat Skuntank.

Continue towards the next marker, where you will now face against Warden Ingo.

Warden Ingo will use Level 41 Machoke, Level 41 Tangela, and Level 42 Gliscor in the fight against you.

Gliscor is weak against Ice-type Pokemon and takes 4x damage from them. On the other hand, use a Flying-type Pokemon to defeat Machoke and Tangela.

Upon defeating Warden Ingo, he will allow you to use Sneasler and climb to the top of the mountains. Keep going to the top till you reach Moonview Arena, where you will face Melli again.

In the second battle against Melli, you will face a Level 44 Skuntank, Level 22 Zubat, and Level 22 Skorupi.

We would suggest you use a Tanky Pokemon like Snorlax against them. Your first priority should be to take out Skuntank or Zubat with a single hit. This is possible with a Snorlax’s Ground-type attack. One such move is the High Horsepower that can take Skuntank out with a single hit.

After defeating Melli, enter the Moonview Arena to fight against Hisuian Electrode.

How to Defeat Frenzied Noble Electrode

Electrode is an Electric and Grass-type Pokemon that will be in a Frenzied state during the battle. Therefore, Frenzied Noble Electrode will keep spamming balls of electricity that will be chasing you around the arena.

It will also throw Exploding Voltorbs at you from a distance that will deal a great amount of damage.

The only way to win against Electrode is to keep dodging his attack until he cools down and starts recharging. This will be the cue for you to start throwing Mountain Balms at it.

Keep throwing Mountain Balms until it starts attacking you again. Then, repeat the process until its health is completely depleted.

Once you have defeated it, you will be rewarded a Zap Plate. Then, go back to the Training Grounds and meet with Commander Kamado to complete the quest.