How to Defeat Noble Pokemon in Pokemon Legends Arceus 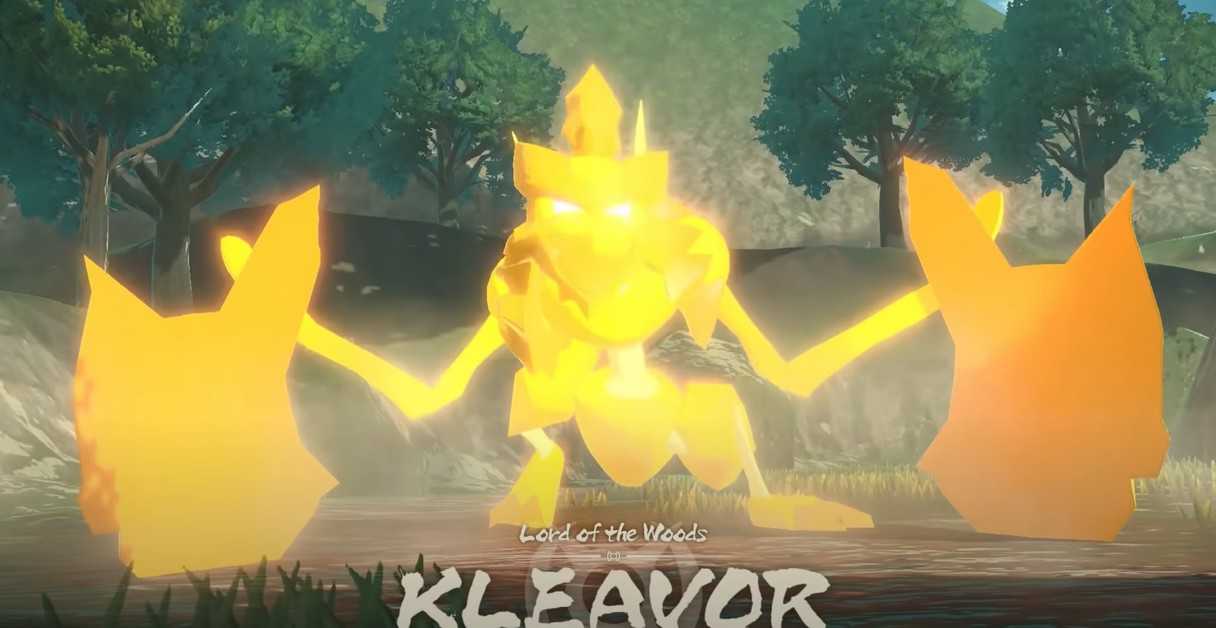 If you’re having a tough time taking down the Frenzied Noble Pokemon, don’t worry because we will help you out with this guide where we’ll be teaching you how to defeat Noble Pokemon in Pokemon Legends Arceus.

In Pokemon Legends Arceus, a strange phenomenon is causing the Noble Pokemon to go into a violent frenzy. These Frenzied Noble Pokemon have a distinct shine, and they’re much larger in size than their normal counterparts.

Since you are part of the Survey Corps, it’s your job to help the Wardens get these Frenzied Noble Pokemon under control.

This guide contains all the tips and tricks you need to know to defeat Noble Pokemon in Pokemon Legends Arceus.

But before we dive into the tips and tricks, let’s go over the basic information you need to know about each of these Noble Pokemon.

The first Noble Pokemon you’ll go up against in the game will be Kleavor during The Frenzy of the Lord of the Woods mission. Kleavor is a Level 18 Rock and Bug-type Pokemon you will encounter in the Obsidian Fieldlands.

Kleavor has 2 moves up his sleeve, a flurry of dashes and a wing attack. The best counter to these attacks is to dodge them. You can easily move out of the way of the dash attack to avoid taking damage.

Kleavor’s wing attack created a wind circle around him. When he starts this attack, try to move away from him as much as possible until the attack ends.

Kleavor’s Elemental Types make it weak against Water, Rock, and Steel attacks and resistant to Normal and Poison attacks.

Bait Kleavor to the rock wall to make him crash and catch him with a Pokeball.

The next Noble Pokemon you’ll face will be Hisuian Lilligant. You’ll come face to face with this Grass and Fighting-type Pokemon when you’re at the Crimson Mirelands. Lilligant will be a Level 30 Pokemon, so this fight will take a big jump in difficulty from the previous one.

Hisuian Lilligant has two different attacks, one of which is a shockwave she sends after jumping and landing. Steer clear of the landing spot to avoid damage from this attack.

In the latter stages of this fight, Lilligant will begin to send an electric wave towards you. Again, make sure to get out of the area of effect her attack to avoid taking damage.

To take her down, toss balms at her when you can and eventually, she will be defeated.

Next up on the list of Noble Pokemon is Hisuian Arcanine, a Level 36 Fire and Rock-type Pokemon that you will encounter at the Cobalt Coastlands.

Hisuian Arcanine has three different attacks in its arsenal. One of the attacks is a charge towards you, which can be dealt with relative ease by moving out of the way.

The second attack is a fire circle in which he will create an area of fire around him. Move out of this area to avoid damage. The third and final attack Arcanine will use is shooting flaming orbs. Stay away from the landing spots of these orbs to avoid taking damage.

Hisuian Arcanine’s Elemental Types make it weak against Fighting and Rock attacks and extremely weak against Water and Ground attacks (4x damage!). In addition, it is resistant to Normal, Ice, Poison, Flying, Bug, and Fairy attacks.

To defeat him, use balms when he is recovering from his attacks. Eventually, he will run out of steam and you will be able to catch him.

Hisuian Electrode is the next Noble Pokemon you’ll be up against in Scaling Perilous Heights mission, and this is where the difficulty really starts to turn up. You’ll find this Level 46 Electric and Grass-type Pokemon at the Coronet Highlands.

Noble Electrode has an array of attacks, which include small explosive balls which he will throw towards you. Move out of the explosion radius to stay safe from this attack.

His second attack is an electricity ball which will follow the player around for a time period before exploding. When you see this attack coming towards you, run as far as you can until it explodes. Then you can use balms to damage Electrode while he is recovering.

The penultimate Noble Pokemon you’ll face will be a Hisuian Avalugg. This Level 56 Ice and Rock-type Pokemon will be found at the Alabaster Icelands.

Avalugg has four different attacks in its arsenal. Two of the attacks are blue orbs and icicles that he will shoot towards you. Just move out of the way to escape the attack.

The third attack is ice missiles that will detonate when they come in contact with something. Make sure to get out of the way at the last moment before explosion to stay safe.

The final attack is a laser that will shoot at a fast speed. Move out of the way to escape this attack.

Dialga is a Steel and Dragon-type and Palkia is a Water and Dragon-type. Their different Elemental Types give them their own unique strengths and weaknesses.

Dialga is weak against Fighting and Ground attacks and resistant to Normal, Water, Electric, Flying, Psychic, Bug, Rock, Steel, and Grass attacks. It is also completely immune to Poison attacks.

Palkia, on the other hand, is weak against Dragon and Fairy attacks and resistant to Steel, Fire, and Water attacks.

How to Defeat Frenzied Noble Pokemon

Calm them Down by Throwing Balms

This can be done by throwing Balms at them. These special Balms are made using the Noble Pokemons’ favorite food, and they’ll allow them to come out of their frenzied state.

The Noble Pokemon have a Frenzy Gauge that you need to deplete using these Balms. Once the gauge is fully depleted, the Pokemon will finally calm down.

Now once you step into battle with the Noble Pokemon, the first thing you need to do is carefully watch its unique attacks.

You need to do this until you completely understand the Noble Pokemon’s moveset. This will help you have a much easier time dodging the Pokemon’s attacks, making the fight much less difficult.

Throw Balms Whenever You Can

Once you’ve learned the moveset of the Noble Pokemon, you need to now look for openings where you can throw the Balms at them.

Remember to not get too ambitious with your balm-throwing. Patience is the name of the game in these boss battles. Keep an eye out for openings and throw your Balms whenever you find one.

Use Your Pokemon to Attack Them

The Noble Pokemon will let their guard down at certain points in the boss fight. In these situations, you can actually send out your Pokemon to deal damage to them and keep them busy while you throw Balms at them.

They will become temporarily stunned when you finally “defeat” the Noble Pokemon. When this happens, the Pokemon will become completely still, allowing you to throw as many Balms at them as you can during that time frame.

If you’re unable to deplete the Frenzy Gauge in this time frame, the Noble Pokemon will recover and keep fighting. When it does that, simply repeat all of the steps listed above until you stun it again. Rinse and repeat until its Frenzy Gauge is completely depleted.