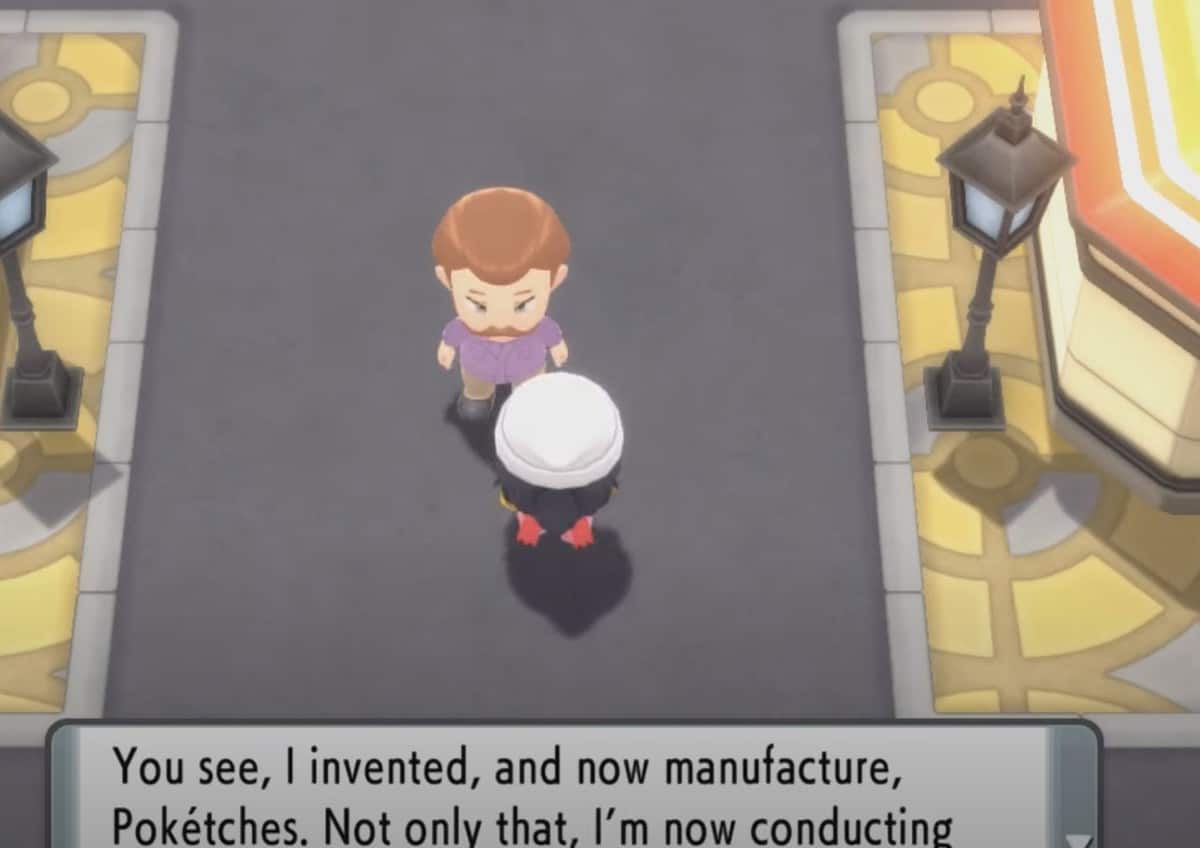 In this guide, we will tell you how to obtain the Poketch, what are its uses and all of the Poketch App and HM Locations in Pokemon BDSP will also be listed here for your convenience.

The Poketch is an essential wearable that all trainers need to have to access other apps and features in the game as well as use hidden moves that make moving around the world of Pokemon BDSP much easier.

How to Unlock the Poketch

Players are introduced to the Poketch watch early on in their adventure and then it’s just a matter of completing a few prerequisites to obtain the watch.

You need to head over to Jubilife City and go talk to your old friend who is inside the Trainers School. Hand over his mom’s parcel and he will give you a Town Map.

After that you need to roam around Jubilife City and once you reach the middle area, the head of the Poketch Company will come and talk to you.

He will ask you to bring him 3 coupons from 3 clowns who can be found around the different areas of the city. You need to find all 3 of these clowns and answer “Yes” to their questions.

Once you’ve gathered all three coupons, go and talk to the President again to unlock the Poketch Watch.

Your trusty Poketch watch comes with a few pre-installed apps but that’s not all as you can find and unlock more useful apps for the watch.

The Memo Pad can be obtained in Jubilife City by talking to the President of Poketch after getting the first Gym badge.

Head over to Route 208 and speak to the Berry Master to unlock the Berry Checker app.

Speak to the resident in the lobby of the Grand Lake Hotel to obtain the coin flip.

You can get the Friendship checker app in Eterna City by speaking to a woman in the Poke Center.

The Dowsing Machine is a gift you get from Dawn or Lucas after reaching Route 207.

You can unlock the Egg Monitor app by Dropping off a Pokemon at the Solaceon Town Nursery after which you need to re-enter the building and speak to the man sitting down.

Speak to the NPC in Celestic Town to unlock the Analogue Clock app for your Poketch in Pokemon BDSP.

The Calendar app can only be unlocked if you have the Rock Climb Hidden Move because you need to access the house in Sunyshore City and talk to the NPC there.

He will ask you to show him a Pokemon with a “Serious” nature. Do that and the Calendar app will unlock for you.

Hidden Moves or HMs in Pokemon Brilliant Diamond and Shining Pearl allow you to traverse the world quickly and gain a few additional advantages like the ability to climb rocks and cut trees.

Unlike some of the other games, Hidden Moves don’t need to be held by Pokemon and instead can be installed on your Poketch so you can use them.

You can unlock this Hidden move by talking to the Hiker in Oreburgh Gate and then defeating the Gym Leader “Roark’ in Oreburgh City.

The Cut Hidden Move can be unlocked after you defeat Gym Leader “Gardenia” in Eterna City and then talk to Cynthia who can be found in front of the Team Galactic Eterna Building.

Defeat Gym Leader “Byron” at Canalave City and then go to Route 209 to talk to the old lady NPC to gain this next HM.

Go to the Galactic HQ Warehouse in Veilstone City after defeating Gym Leader “Maylene” and look to the right of the entrance to find the Fly HM.

Defeat Gym Leader “Crasher Wake” in Pastoria and then go to the Great Marsh. You need to Pay for the Safari Game and look for a green-haired NPC who will give you the HM.

Give the Old Charm to Cynthia’s Grandmother in Celestic Town and she will reward you with the Surf Hidden Move that you can use after defeating the “Fatina” gym leader in Hearthome City.

Defeat Gym Leader “Candice” Snowpoint City and then look around Route 217 to find this HM Northeast of the Hiker’s house.

After you defeat the Gym Leader “Volkner” at Sunyshore City, the HM is given go and talk to Jasmine on the beach north of the city to receive the Waterfall HM.