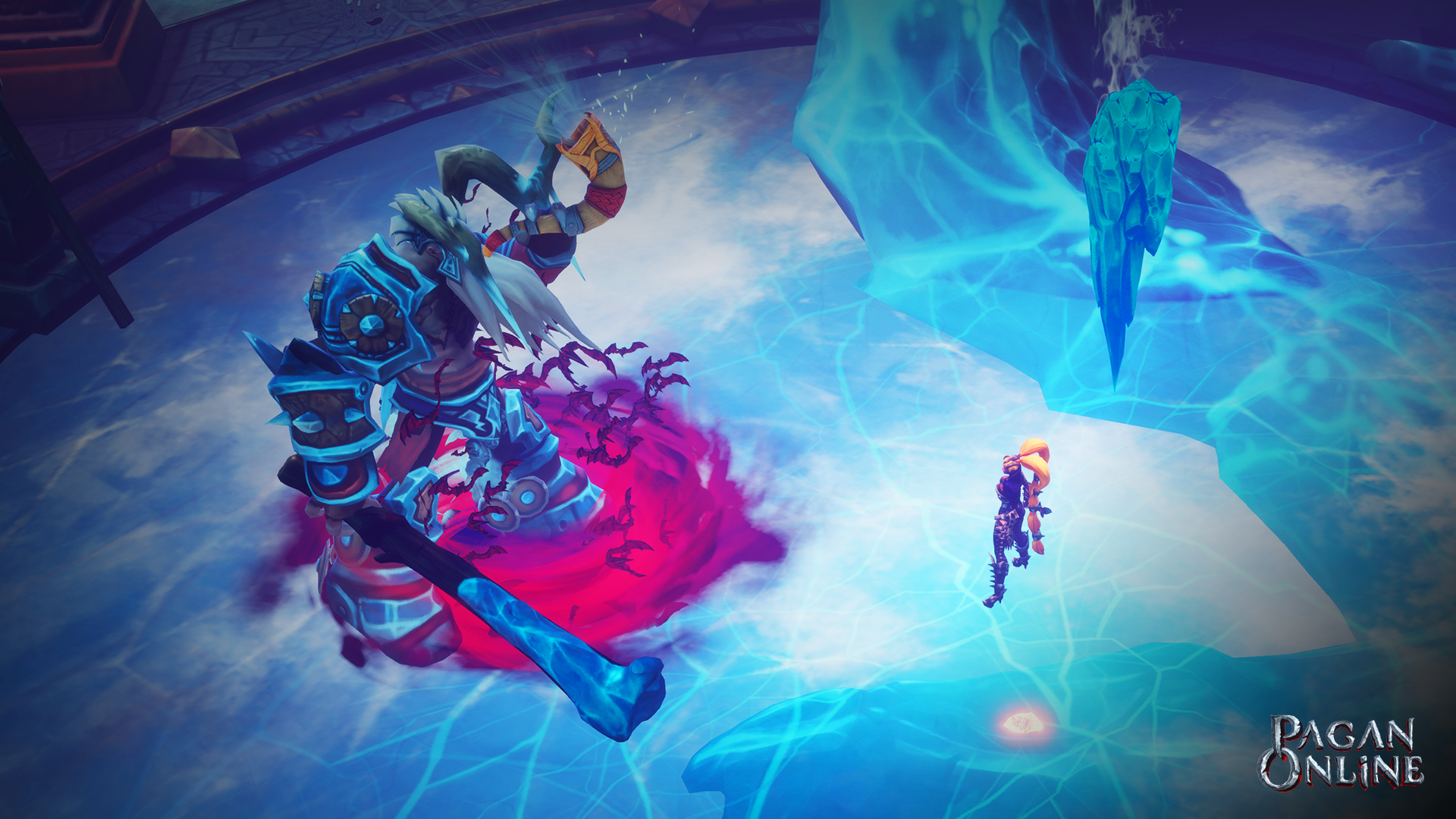 I’m going to preface this review by saying beforehand that it’s a really good game. I don’t mean in the sense of being a great game on its own. I mean how smooth, stable and optimized the game is for an early access (releasing on August 27). The early access games I’m normally used to are games like PUBG and Hello Neighbor. Both of those turned out to be quite trash in terms of optimization even in their full release. Considering Pagan Online is smooth already, it can only go uphill from here. 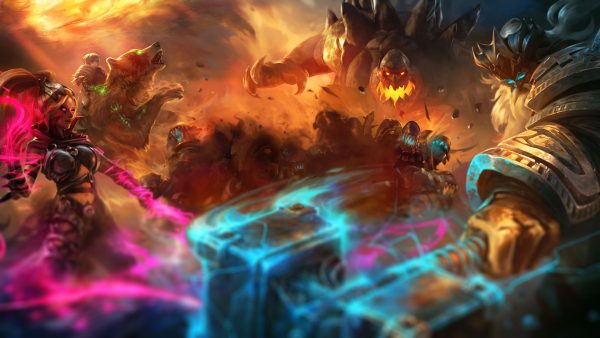 Pagan Online is set in the Land of Rod. Yes, the name sounds rather peculiar but bear with me. Before the world within Pagan Online was conceived, an entity known as the Shroud was the only thing that existed. The Shroud was nothing and also everything, I’d say it’s the game’s version of the big bang event.

The Shroud spawned sentient beings that went through the natural evolution process. Some evolved into more than just beasts with their primal instincts. These creatures turned into divine diety type beings. One of the beings spawned out of the Shroud went on to be named Svarog. Svarog ate his peers and garnered enough energy to be able to create his own little pocket dimension of sorts. This dimension is called Land of Rod. This is where our story takes place.

The Land of Rod is plagued by a new demonic threat, one threatening the existence of the pocket dimension. The Gods including Svarog have vanished. You were a warrior that fell in battle but were given a second chance by the Pantheon, a hub for astral warriors. Now you must find answers and take down your demonic enemies. 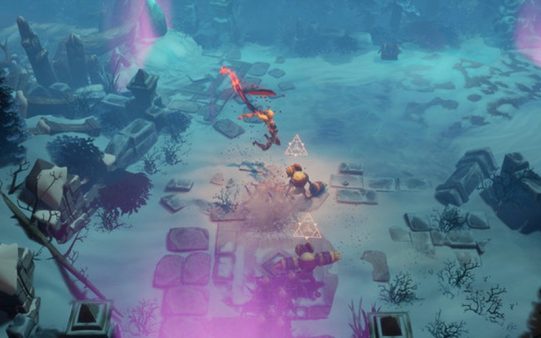 Now the story sounds like one where you would be able to make your own character. That isn’t the case though. Instead, you have a roster of champions to select from. You have three starting characters to select from. A dwarf tank, a beserking juggernaut and a long range whip lady. I played Anya the blood ritualist.

Her long range whips, slender physique and narrow hitbox and nimble dodging fit my playstyle pretty well. Thing is, I did slightly dislike how the starting pick worked. Not becayse I disliked Anya or anything, but because a lot of options were hidden.

After slugging through the intro which was actually not as long and boring as most game intros, I was exposed to the full actual roster of characters. This included some cool Reaper character, a spellcaster and even a beastmaster. It would’ve been nice to have access to them initially because after the intro, it takes a lot to unlock even one of them. 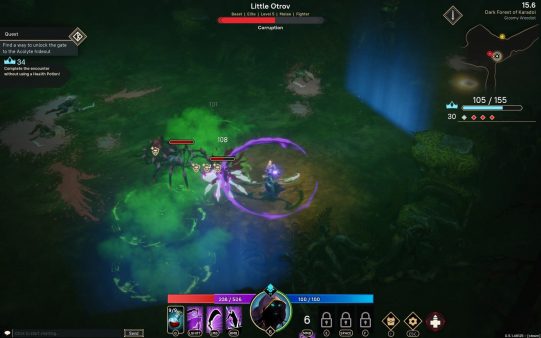 Then the game itself is presented in the form of an isometric action-RPG. One that incorporates hack and slash along with dungeon crawling. You move with the WASD keys and use your mouse to tilt where your character looks. Each character has different attacks and combos that can be triggered with the left or the right click. Furthermore, you can remap different keys to different abilities.

I do feel like some of the cooldowns affect the speed and pacing of the game. The dodging being on cooldown for example. At the same time, it also makes dodging more valuable as well since you should only save it for hard to avoid attacks. I’m pretty sure you can also lessen the cooldown on some of these abilities through skill trees later on. It is an RPG after all.

Other than that, the game also has an intricate crafting system in the form of a Smithy. This smithy is present in the Pantheon Hub as well as at one specific checkpoint in every level. To ensure you don’t just abruptly run out of a weapon to use anytime soon. Similarly, you can apply different buffs and modifications to your weapons mid-level to suit your needs at the time, depending on what kind of boss you’re facing.

Each mission drops you into a large open area. The navigation of which is kinda reminiscent of Dota maps. As such, the maps reward exploration a lot. My word of advice, go in the opposite direction of the arrow pointing out your objective. Doing so will grant you some pretty neat loot in the form of a secret chest in some dark corner. They’re often guarded by some pretty tough enemies though so be on the lookout.

The lore of the land is also put in these environment points. Ones that activate a classic RPG style narrator to tell you what went down. The enemies themselves can vary from time to time but not as much as I’d want them to. They all usually had the same pattern of hording me like LoL minions. I came across one major boss fight in the amount of the early access I played.

He was an endurance fight more than a mechanical one. Endurance meaning that it was a long grueling battle due to his insane amount of health. Other than that, he didn’t exactly do much that needed a lot of effort or brainpower to avoid. I didn’t even have to use my dodge ability, simply walking away from his long winded attacks was enough to ensure my safety.

I did die once near the end of the fight because I got too greedy trying to finish it, after which I was stunlocked into oblivion. The boss did a lot of damage for sure. I guess that’s why he was easy to avoid for the most part maybe. The fight did have some minion ganks as well but they weren’t too much trouble. Some of the chests that were guarded by ambushes were hell to avoid though. Mainly because of how much shit would start happening on screen.

I loved the way the game didn’t hold my hand at any point. Sure there was an objective arrow but exploration, lore, crafting and the way I levelled up was all done at my own pace and choice. I adore that in a game since spoon-feeding can be hella annoying. Nothing was obnoxiously hard to understand either, hence why no official tutorial was required. Finally, I did love how quick the game established itself. Sluggishly long intros are a gamer’s worst nightmare.

Since it’s early access, I’m sure multiplayer is about to be added as well. Hence the term Pagan Online. Other than that I don’t really have much I wanna suggest to Mad Head Games that they haven’t already covered.

My only two suggestions are these:

1: Make all eight heroes available to start off. No hero has a distinct advantage over the other, they’re all a matter of preference. Furthermore, it sucks to put xp and points into the initial 3 characters only to trade them off for a fresh start with one of the other heroes.

2: The formula of each mission gets a little repetitive. It could get boring really fast for a gamer with a short attention span.

Other than that, you’re good to go!

Pagan Online is a very promising Action RPG (just out of early access) that can offer a long lasting experience.