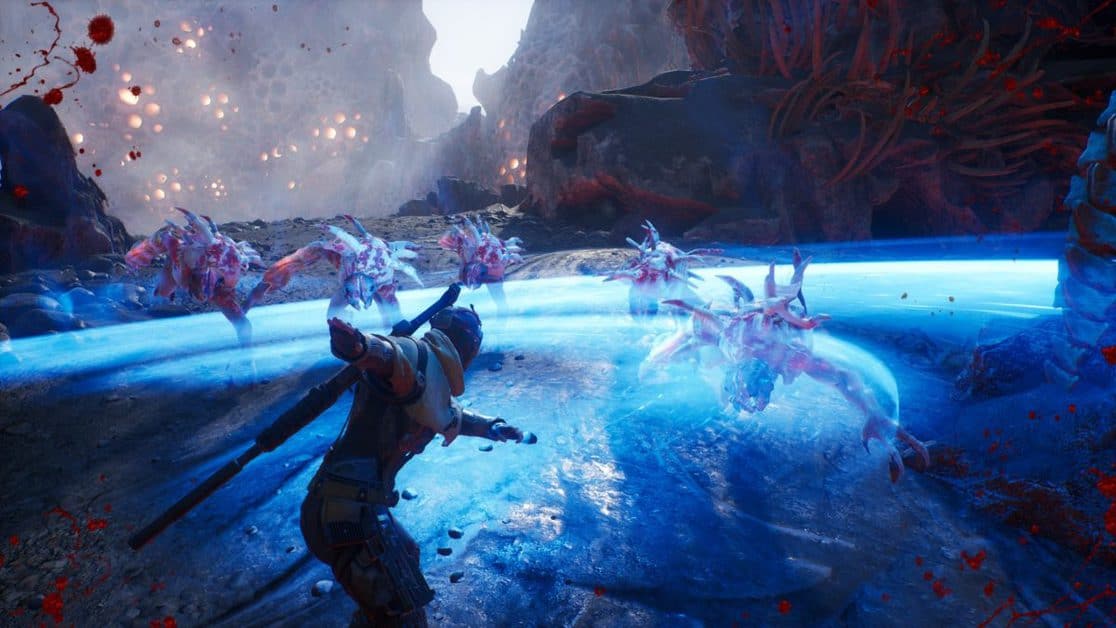 Outriders offers the players a total of four classes to choose from. Out of these, Tricker is meant to be the most mobile and agile class out of all four. In this Outriders Best Trickster Builds guide, we’ll be showing you what you can do to get the most out of your trusty sword.

Before we start off, let’s understand what’s the fundamental element that makes Trickster who he is. What gives him the edge over his opponents? Below is a list of all of his skills that can help him manipulate the playing field and turn the tide into his own favor.

All of the skills below can, of course, be improved with modifications to make them even better.

Slow Trap (Level 3)
Make a spacetime Anomaly which will affect your enemies with Slow and make projectiles slow as well.

Venator’s Knife (Level 17)
Release a temporal knife at the enemy, this blade will then bounce off of 5 enemies in a small radius. Marked targets by the blade will be Slowed, and will receive twice the damage dealt by you for the first hit.

You’ll find the Trickster to have three bad-ass subclasses.

The Harbinger
You’ll find the Harbinger to be the tankiest of the lot. Having a greater tendency for defense, however not that likely to deal as much damage as the other two subclasses. Not an ideal choice if you’re going for a DPS character.

The Reaver
You’ll find The Reaver to have a number of tricks up his sleeves. One of the most important ones is the skill leech which allows him to gain health from damage done by skills. The more damage you deal, the longer you can survive out on the field.

The Assassin
Probably our favorite out of the three classes. It has perks that are able to increase weapon, range and stealth damage along with individual boosts that amplify your already awesome skills.

Ruler of Leeches
Increase your survivability by boosting your weapon leech by 20% after you get a killing shot.

Shield Maiden
Earn shield with every shot you land on your enemies. Since the Trickster is heavily reliant on shields for surviving, this is a really good option to keep by your side.

Killing Spree
You can start stacking up your damage with the Killing Spree perk. Essentially increasing damage by 30% per kill shot.

Body Snatcher
The Body Snatcher is an extremely convenient perk. After you’ve killed an enemy, another one will be put in place of the one who recently died. This means you won’t have to move your aim at all, and can continue firing away without any second-hand considerations.

Life of the Party
Take reduced damage based on how many enemies are close to you. Helpful for crowded areas. However, you’ll still need the help of your allies to get through a tough situation like that.

Introvert
Introvert increases the distance criteria for enemies to be considered in close-range. This helps in boosting the Life of the Party’s passive perk.

What Goes Around
20% chance to deflect any bullets that land on you to nearby enemies. Pretty good damage on the side.

Personal Space
Based on how many enemies are around you at the time, your damage will increase in accordance with that factor.

Shield Zap
Unleash a bolt of lightning from your shield every few seconds, which attacks nearby enemies.

You should now have a good idea of the best builds for the trickster you want to run in Outriders.