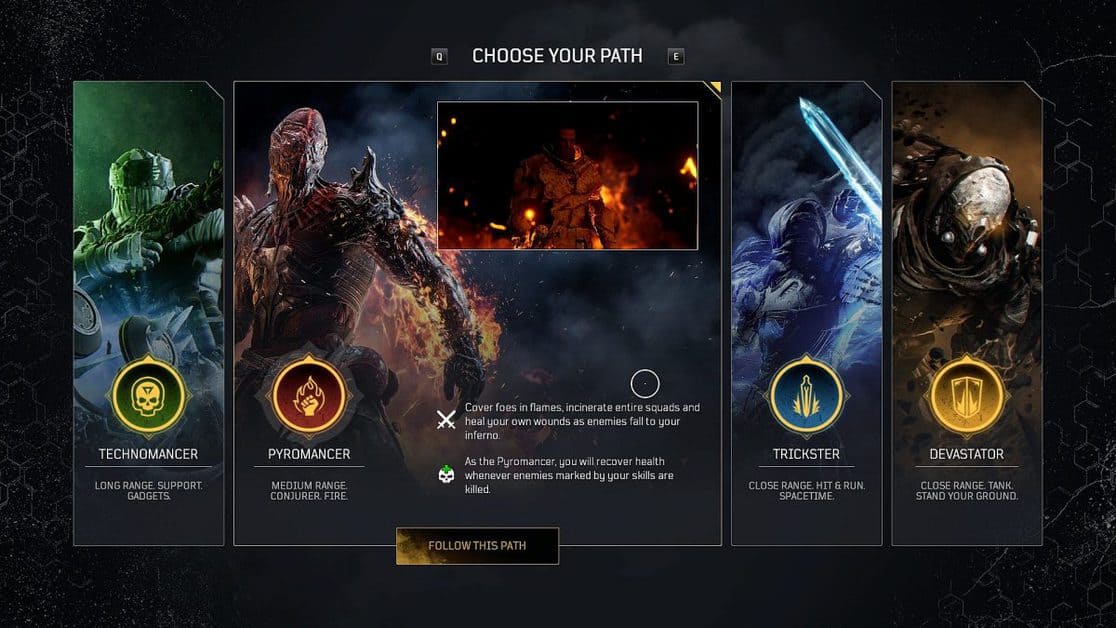 The full version of the Outriders has been released, and it seems that you can play through the game with a number of new classes that will determine your playstyle for the rest of the game. In this Outriders Best Classes guide, we’ll be showing you what to expect from each of the classes, discussing their abilities in-depth for your better understanding.

Outriders is pretty well-optimized in terms of classes, but since you’ll have to sit through its huge campaign, it’s best that you pick the character that helps you enjoy your playthrough.

What Does a Different Class Mean?

Choosing a different class doesn’t mean electing to only a specific type of weapon and rolling with it throughout the game in Outriders. You’ll still have access to the entire arsenal. However, there still might be some passive perks with each character that boost certain weapons accordingly.

You’ll find different class skills that are exclusive to them only. They will be able to deal class-specific damage or inflict status effects on the enemies. You are able to unlock a total of eight skills, and equip only three of them at a time.

You can find a total of four different classes in the game, each of which have unique abilities and buffs that you are going to want to utilize.

Devastator – Close range tanky character that will help your allies by becoming a front-line fighter, absorbing all the damage, while they dish out the DPS.

Pyromancer – The Pyromancer is a medium-range character that utilizes fire to wipe out the field in large groups using his AoE damage.

Technomancer – Long-range character that uses gadgets and supports the entire team to enhance their play-style on the battlefield.

Trickster – Close-range, fast playstyle and takes control of space-time to juke his enemies and kill them before they know what even hit them.

What Class Should I Pick?

We’ve made a detailed run-down of what each class is capable of, and that should give you a pretty good idea of what to select.

The Devastator’s basically a tank, and more of an ideal ally to have during a co-op playthrough of the game. You’re going to send this guy out to the front and deal damage alongside your team-mates to take care of the enemies without any problems.

With a Devastator removed from the equation, you might find your playthrough a tad bit difficult.

Earthquake (Level 1)
Unleash a shockwave to interrupt enemies and deal damage in front of you.

Golem (Level 3)
Strengthen yourself and reduce 65% of the incoming damage for a total of 8 seconds.

Gravity Leap (Level 4)
Jump into the air and slam your targets from the air; this deals damage and interrupts them in a small AoE.

Reflect Bullets (Level 6)
A barrier that will capture all of the enemy’s projectiles and build up damage. After 10 seconds, you’ll be able to reflect the damage back on your enemies that you’ve absorbed thus far.

Impale (Level 9)
Mark a target and put Bleed on them while passively dealing damage. Should the hit kill the enemy, this will create an AoE, which will grant your allies health regeneration and armor for 9 seconds.

Tremor (Level 13)
Cause explosions around you which deal damage and drain health from enemies in a radius around you.

Boulderdash (Level 17)
Dash forward to interrupt enemies in your path and deal damage. Smash the ground at the end of the charge to deal damage to enemies around you.

Endless Mass (Level 22)
Cast a target into stone and put Bleed damage on them while at the same time pulling enemies towards the marked target. The stone explodes, dealing damage to enemies present within the vicinity of the explosion.

The Pyromancer is completely ineffective at long ranges, and requires you to be a little closer to your enemies to dish out that sweet sweet burn. Not exactly the perfect class for playing through the game in solo mode.

Heatwave (Level 1)
Use a fire wall and push it forward to cause Burn on enemies unfortunate enough to be caught in its path.

Feed the Flames (Level 3)
Bring an enemy close to you by pulling them, deal damage and drain their health to aid yourself while inflicting Ash at the same time; pretty handy.

Thermal Bomb (Level 4)
Mark an enemy to Burn, which interrupts them and deals damage. If you kill them while they’re affected by this ability, they will explode and deal damage to any enemies present within its vicinity.

Overheat (Level 6)
Damage enemies in a large radius and interrupts their skills. Enemies affected by the Burn will receive additional damage as well, but the Burn will end once you dish out that damage.

Volcanic Rounds (Level 9)
Fill up your weapon’s magazine with Anomaly-infused bullets that will cause Burn to enemies in a small radius and pierce targets as well. Once you’re out of ammo, or switch weapons, the skill will expire.

Ash Blast (Level 13)
Cause an Anomaly blast to inflict Ash on enemies within a large radius around you.

F.A.S.E.R Beam (Level 17)
The F.A.S.E.R Beam will fire an energy beam that will deal damage to the enemy based on 125% of your Status Power. Interrupts and causes enemies to Burn as well.

Eruption (Level 22)
Cause a volcano to erupt from below an enemy which deals damage to them along with anyone present in close vicinity.

The Technomancer is essentially the support of the lot, able to heal allies and interrupt enemies to turn the tide of the battlefield into its team’s favor.

Scrapnel (Level 1)
Release a device that will explode to deal damage and interrupt enemies.

Cryo Turret (Level 3)
Put down a turret that deals damage to enemies automatically in its line-of-sight whilst also inflicting Freeze on any enemies hit. The turret will deteriorate over time and is also vulnerable to damage from enemies.

Pain Launcher (Level 4)
Put down a missile launcher and bomb right in front of you with each missile dealing damage and interrupting the enemies.

Blighted Rounds (Level 6)
Charge your ammo up with bullets that affects enemies with Toxic if hit. Enemies present in that small radius will receive Toxic along with 50% of the damage. Ends when you reload or switch your weapon.

Tool of Destruction (Level 9)
Make a Rocket Launcher that can interrupt enemies or a Minigun that is able to deal damage. It remains active until you run out of ammo.

Fixing Wave (Level 13)
Unleash your energy to restore 33% of Health to all players around you and 50% of Health to your turrets (Distance doesn’t matter for turrets).

Cold Snap (Level 17)
This gadget will affect all enemies with Freeze (Large radius).

Blighted Turret (Level 22)
The Blighted Turret is an automated turret but able to inflict Toxic onto the enemies. Works pretty much the same as a normal turret.

Slow Trap (Level 3)
Make a spacetime Anomaly that will affect your enemies with Slow and make projectiles slow as well.

Venator’s Knife (Level 17)
Release a temporal knife at the enemy, this blade will then bounce off of 5 enemies in a small radius. Marked targets by the blade will be Slowed and will receive twice the damage dealt by you for the first hit.