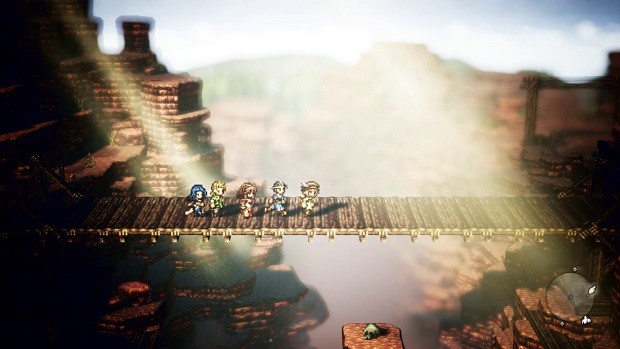 Once you have been introduced to each of the characters, you will want to locate all of the shrines that are present in the game, as they will allow you to unlock the Secondary Jobs for your characters. This Octopath Traveler Shrines Locations Guide will help you along the way.

Our Octopath Traveler Shrines Locations Guide will show you the locations of all of the shrines that are present in the game so that you can get the second Job for your characters.

Before we go ahead, it is important to remember that just like your Primary Job; a single person can only hold a single Secondary Job. A character who gets a second Job can use both of the skills and the abilities that are granted to it. Moreover, you can always switch around your Secondary Jobs between characters whenever you are at the tavern.

This shrine can be found towards the Western Stillsnow Wilds and looks over the Aelfric in Flamebringer.

To unlock the Merchant Secondary Job, you need to head over to the Moonstruck Coast and find it underneath the area of Biflgran, the Trader.

In order to unlock the Scholar Job for your party, you need to go to the Western Noblecourt Flats. The shrine is looked over by Alephan, the Scholarking.

You can unlock the Dancer Secondary Job by going to the Northern Wellspring Sands. Sealticge, Lady of Grace looks over the shrine.

The Warrior shrine can be found in the North Stonegard Pass. It is looked over by Brand, the Thunderblade.

In order to unlock the Shrine of the Healer, you need to head over to the East Saintbridge Traverse and find the shrine that is looked over by Dohter, the Charitable.

In order to unlock the Hunter Secondary Job for your travelers, you need to head on over to the East Victors Hollow Trail and find the shrine overlooked by Draefendi, the Huntress.

Let us go ahead and take a look at the Secret Shrines that are present in the game. You can only access them in the late game by accessing the advanced class shrine. This map will have 4 different shrines that you can find. They do not appear on the map but you see them on your radar whenever you are near them as 4 white pillars.

You are also going to have to defeat a ton of enemies before you are able to access the shrines. In the end, you will defeat the god or the goddess to receive the advanced class.

This shrine is found near the West Everhold ass. It unlocks the Runelord class.

This shrine can be found in the Western Wispermill Flats. It unlocks the Starseer class.

This shrine is found in North Riverford Traverse. This will unlock the Warmaster class.

Find this shrine in East Duskbarrow Trail. It will be used to unlock the Sorcerer class.

That is all we have for our Octopath Traveler Shrines Locations Guide. Let us know if we missed something using the comments section below!