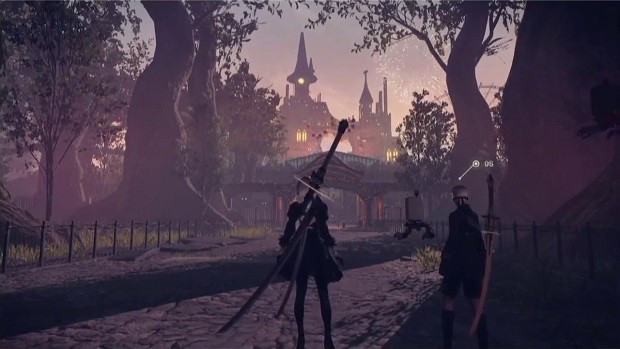 This NieR Automata Amusement Park Walkthrough will guide players through the area, completing the quest as well as finding the loot scattered through the region.

The Amusement Park: Main Square section of NieR Automata takes place after players have defeated Adam in the Desert Zone and requires them to find the missing YoRHa units

After leaving the Resistance Camp, players will need to head north and then east to reach their quest marker. The way to the Amusement Park is blocked so you must take a detour via the sewers underground. Once you have reached the designated area, a ladder will take them down to the sewers.

The Sewer
In the sewers, players can go south towards a small opening with a loot chest inside it that contains Medium Recovery. Soon players will come up on a fork where the north leads to a dead end while the southern path leads to a ladder.

Continuing through this ladder, on to the new path and then up the ladder will take players to a new weapon, Virtuous Dignity. After picking up the weapon, players need to return back and then go up the first ladder to reach the Amusement Park.

Park Entrance
The machines in the Amusement Park seem to be friendly so there is no need to attack them on sight. In the distance under a tree, players can go talk to some of them to receive a Shattered Earing.

Once players have the item, they can kill the machines in this area if they want the “Wait! Don’t Kill Me!” trophy which requires them to kill 10 friendly machines.

Once you engage the friendly machines, they turn hostile and all of them will start attacking you. After the machines on the ground area there are some more Stubbies up the stairs to the east that you can fight.

However, make sure not to kill the three Small Flyers are the top of the stairs. After talking to these Flyers, players will get a Drab Bracelet.

Proceeding up the second set of stairs, players will see two more Small Flyers which can be safely killed. After these two, players can also kill the Father Machine and his two kids at the top of the stairs to complete their trophy.

Closed Gate
The path forward through the main gate will be blocked so players need to find an alternate route by going down the stairs you came from and then proceeding leftwards into the gate on the side.

Players can talk to the friendly machines in the area to access a shop. A ramp next to this shop will lead the players to a Small Recovery while an alleyway near the shop on the left takes them to the next section.

Crossing the alleyway, players will end up in a new area with an Access Point nearby which can be used to update the map. In the southeast corner of this area is a locked chest.

Players will have to climb up the rides to reach the other side of the fence and talk to the Clown Machine which points to an arena behind it.

Players can drop into the arena to fight a tank which doesn’t attack until players begin the fight. Players can jump on top of the tank to expose the core and damage it using melee attacks.

Once the tank is down, players can pick up its Machine Core and go up the stairs to travel into a roller coaster cart.

Roller Coaster
While riding the cart, enemies will jump on top of it and attack the players but they shouldn’t be hard to defeat. Eventually, the cart will take the players to the Theater where players will finally fight the boss, Beauvoir

Beauvoir is a level 15 boss with a large metal skirt that acts as a defensive shield so while players can attack the skirt, it won’t do her major damage and the best way to defeat Beauvoir would be to attack her main body. Throughout the fight, players should constantly be shooting at her with their Pod.

Occasionally, Beauvoir will use her Sweeping Blades attack in which she lifts up her skirt a bit and a number of small blades start circling her. She spins around, slashing anything that gets close and the more damaged she is before starting this move, the faster her spinning speed will be.

Besides the spin attack, she also drops energy orbs that bounce around the area and can cause some damage so it is best to get away from her when she uses this attack. Her Homing Bullets and Missiles can easily be dodged as players can see them coming.

Similar to her spinning blades and bouncing orbs, Beauvoir uses Sweeping and Bouncing Laser attacks that come from underneath her skirt.

As players keep chipping away at her health while avoiding these attacks, her health will eventually reach 50% and she will jump onto the stage and release a large shockwave that starts hacking the player. In this stage, players will play a minigame to counter her hack.

Players will control the small triangle and they need to shoot the black boxes to reveal the black orb which needs to be destroyed to end the hack.

After taking care of the hack, players will need to fight multiple small machines while making sure they don’t get hit by their round wave attack as it can start yet another hacking minigame.

Once players have defeated all the small machines, Beauvoir will come back down and start fighting the players again while 9S tries to hack her. Once her health drops by 75%, she lays still on the ground giving players a good time window to attack her.

Soon after this phase, Beauvoir will get rid of her skirt and employ two new attacks, Circular Lasers, and Shockwave.

The lasers are on the floor and get bigger the farther they travel so players need to get away from them.

After Beauvoir has been defeated, players can go outside and talk to 9S to complete the mission and loot a chest to the south side for Speed Salve.

In this area, players will also encounter a Small Flyer which wants 9S and 2B to follow it to the Machine Village.