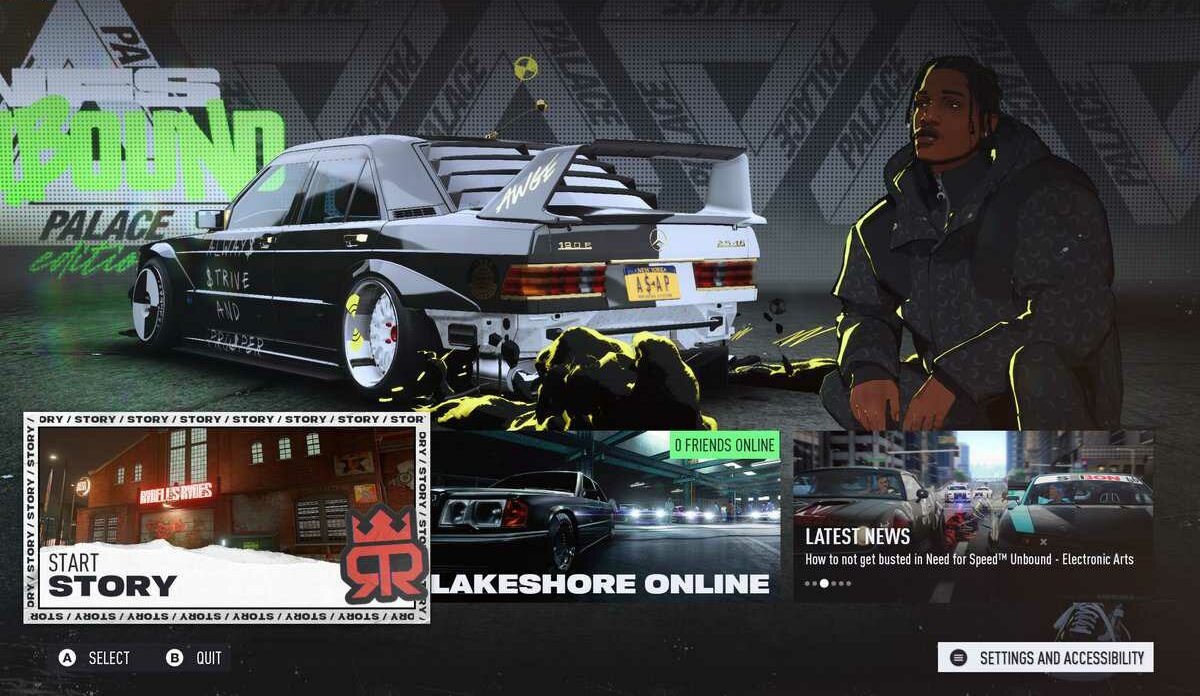 It won’t be wrong to say that in the modern day, a new Need for Speed game doesn’t have as much hype and excitement it used to have back in the day. It’s quite understandable considering how many games we have received in the series and new racing franchises like Forza Horizon series appearing on the scene as well.

When Need for Speed Unbound got revealed, fans were quite skeptic about the new art direction with all that graffiti and anime styled characters. We too, weren’t sure if the new direction would work for a Need for Speed game or not. However, I will have to say that Criterion Games have done a decent job with the new approach.

The new flashy visual effects don’t feel forced and blend-in well with the arcade nature of the game. Each effect has a meaning and gives a satisfactory feeling when about a certain action in the game. For instance, the flashy smoke coming out from the back of your car while drifting or those wings while in midair feel somewhat satisfying. But if you still don’t like those effects for some reason, you have the option to turn them off from the settings.

While the characters in the game are anime styled, actual racing and the world give us somewhat a different feel. Despite all those flashy visual effects, it still feels like a Need for Speed Game and Car designs don’t deviate much from what they should actually look like.

While Need for Speed Unbound offers different camera angels, there is no cockpit view which might be a disappointment for some fans. However, action camera in the game is something you should definitely try out.

NFS Unbound doesn’t have the notorious always online requirement so if you want to play it offline, you can do that without any problem. The game does offer crossplay which ofcourse, can also be turned on or off based on the preference.

Players can also tune their cars but the effects aren’t as considerable as one would expect. You can also change how you want your car to drift at turns so if you don’t like the default settings, you can experiment a little. While you might come across good cars for drifting, the game doesn’t force to use drift only cars. You can technically play each even with one car you like.

Need for Speed Unbound offers day and night cycle with meaningful choices. Day time race events are relatively safer as you don’t need to spend cash to participate in the races. Since day time racing events are relatively risk free, they offer lesser rewards. Hardcore racing happens at night where cops are felt tougher as well. At night, it’s high risk, high reward scene. Since you are spending cash to participate in races, they will in return grant you better rewards if you manage to win them. However, if you lose the race, the money you spent to participate will be gone. Not to worry much here as at Normal difficulty, you will be given around 4 attempts to try and win that cash back. So it will be up to you whether you want to race more at night or not.

Need for Speed Unbound offers different difficulty options at the start of the game and explains each difficulty a bit like how many attempts will you get and much difficult cops and AI would be. At normal difficulty, the game offers a descent balance however, if you want more challenge and think that you can outrun the stubborn cops in the game, you can go for the third, hard difficulty. The good thing is that you can change the difficulty anytime you want so don’t worry about selecting anything at the start of the game.

Game’s “Heat” element also plays a crucial role in the game. Heat, as one might expect is a type of notoriety element in the game. Piling up that Heat meter during Day or Night will make you more vulnerable to cops. At night, Heat element accumulates faster than day considering the high rewards. The more you race, the more that Heat meter will go up. So you unless you enjoy living on the edge, you might want to head to the garage after 2-3 races to secure the cash you earned. Yes, if you get busted while a cop chase, all your cash will be gone. So it might a be wise choice to save that money before getting to excited.

Cops AI in the game can be quite stubborn at times especially at higher difficulty and Heat Levels. And while cop chases after each race might feel exciting at first, they can become tedious after sometimes especially when you have just won a relatively hard race.

Apart from spending cash to participate in races, Need for Speed Unbound offers players another way to earn some extra cash. You can also bet with other AI racers and if you manage to beat them as well, you will get that cash too. Naturally, against better racers, the bet will be higher leaning towards high-risk high-reward theme.

The game offers a descent variety in content however, if you have been spoiled by Forza Horizon 5 recently, you might still find it enough after 15-20 hours or so in the game. Your basic goal, like many other NFS games, is to win races and pile up cash for the grand finale. You will be mostly doing street racing with a couple of different events like drift races and takeovers in the mix.

Now if that sounds too boring to you, Criterion Games have also introduced some side activities in the game as well. These can feature different objectives like delivering a car or picking someone up. The good thing about these side activities is while they offer cash, they also give you a chance to drive some of the best cars in the game. Most of the cars you drive while doing these activities will then be available for a permanent purchase. Again, the content is not as diverse as Forza Horizon, but it can contribute to longevity factor.

For each day and night cycle, players will have some challenges which they can complete to earn some cash. These challenges, apart from winning races, include the regular Speed Traps and Boards. So if you are a perfectionist, you can go after these challenges as well.

Need for Speed Unbound also has a story however, since it’s a racing game primarily, don’t expect too much from it. Since I can’t share spoilers I will let you be the judge of that. To me, it was alright. While in-game characters look and feel cool, they are somewhat let down by mediocre voice acting and below par dialogue choices. Those characters could have been much better.

As for the variety of cars in the game, Need for Speed Unbound does a decent job here as well. From the old classics to the modern juggernaut, Unbound offers a wide array of cars to choose from. Naturally, you will have to earn them. Personally, I felt that the progression was a bit slow paced considering you have to spend cash on multiple things, but you will eventually get those cars you want badly in your garage.

For cosmetics, it would have been great to have another in-game currency as managing that cash at multiple fronts could be a hassle for some players. Do you go for an upgrade? Buy-in races? Buy cool clothes for your character? What about new cars? All of it needs cash so you should be careful about your spending behavior especially in the early part of the game.

While the game looks great, it performs good as well. On PC atleast, i didn’t come across any performance issues. It seems like dropping last-gen consoles was a good choice. Nvidia Reflex Low Latency coupled with DLSS or FSR give a quite smooth experience. Even in online races, you don’t feel any graphics or performance related issues. Corssplay works quite well without presenting any noticeable issues.

The multiplayer of the game works in similar fashion as singleplayer. You race with other opponents and earn cash and with that cash, you can do different things like buying new rides, customizing them and upgrading your garage. I was actually quite impressed with the latency in the game. There were no noticeable lags and races felt as if you are playing the single-player mode. Your are not barred from participating in events just because you don’t have a car suited for the race. So, even if you don’t have good cars, you can still enjoy the multiplayer.

As a package, Need for Speed Unbound doesn’t fail to impress even if there is no major innovation. Again, you can’t expect from the 25th entry in the franchise to be that innovative. The game offers a solid racing experience coupled with small variations that blend-in well to for a solid overall experience. Need for Speed is Definitely in the list of “Good” NFS games.

Need for Speed Unbound is definitely another fun experience in the franchise. All those concerns related to the new art style approach should be laid to rest.