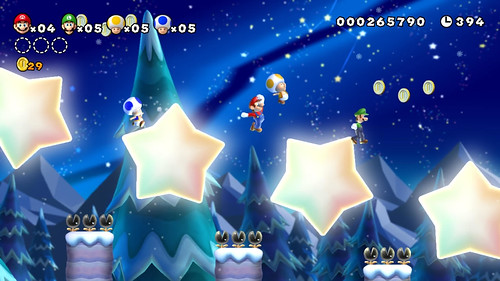 In the world of Mario, items are more than just tools to help you in your wonder-filled journey across different magical worlds. The New Super Mario Bros U Items for the Wii U continues the trend with some classic Mario series items and additional newer collectibles to look forward to.

Items in the Mario world can be divided into two types – Power Items that give you direct bonus benefits, and collectibles that stack up and are for the long-term progression.

Power Up items generally transform Mario to make him more effective. These items usually appear from the question mark bricks that Mario can hit. However, there are other sources for these items as well, such as Toad Houses etc.

Super Mushroom
The red colored infamous Super Mushroom allows Mario to grow bigger and take two hits instead of one to lose a life. The first hit reduces Mario to his standard size.

Fire Flower
The Fire Flower is an offensive Power Item that allows Mario to throw fireballs from his hand – super handy!

Super Acorn
The Super Acorn is a brand new Power Up introduced in New Super Mario Bros. U. After getting this item, Mario turns into a super ‘squirrel’ Mario, and has the ability to hover or glide for a while after jumping.

Ice Flower
The Ice Flower is similar to the Fire Flower, except that Mario throws ice balls at enemies which freeze them. Frozen enemies can be used as platforms, particularly in underwater levels (where frozen enemies float up to the surface).

Mini Mushroom
The Mini Mushroom is the opposite of the Super Mushroom; it turns Mario smaller! Mario is then able to walk on water, jump higher and farther, fit into cracks and other small areas, and also run up walls. This power-up however prevents Mario from killing larger creatures and makes him vulnerable.

Penguin Suit
The Penguin Suit converts Mario into a Penguin, and also gives him the Ice Flower ability. Mario can slide on his penguin belly while in this form.

Starman
The infamous Starman Power-up grants Mario invincibility for a limited duration of time. If Mario destroys 8 enemies in the duration of the Starman power-up, he will get an extra life, along with 1 additional life for every enemy that he kills after those 8.

P-Acorn
The rare P-Acorn power-up is obtained by grabbing the thief Nabbit, which appears occasionally in various stages of the game. The P-Acorn allows Mario to fly continuously.

POW Block
The POW Block is an environmental offensive tool that Mario can hit. Hitting the block causes a shockwave from the block, destroying everything (including other blocks and enemies) around it.

Coins
Coins are the main currency and also the most commonly obtained items in the Mario series. They are present everywhere. Collecting 100 coins gives Mario a life.

In New Super Mario Bros. U, there are multiple types of coins, such as gold, star, red, and green. Coins can be found in a variety of places, such as floating in the air, in bubbles, bricks, and more.

Rings
Rings in New Super Mario Bros. U are items that make coins appear near the area they are collected. These coins are there for a limited duration, so it depends on the player’s speed if he/she can collect all of them. There are two types of rings.

Red Rings:
These types of rings spawn 8 red coins that are required to be collected in a limited time by the player.

Green Rings:
These rings spawn green coins and work in a similar way to the red rings (however, the pattern of the spawned coins varies according to the type of ring).

1-Up Mushroom
You don’t know Mario if you don’t know the 1-Up Mushroom. This infamous collectible green mushroom gives you 1 bonus life. They appear in blocks or as a reward for collecting all the coins from a ring.

3-Up Moon
The 3-Up Moon is a modified version of the 1-Up Mushroom. Instead of 1 life, this item gives you 3 lives, hence making it an extremely valuable collectible.

Propeller Mushroom
These are the power ups with a cap covering two eyes. This will give Mario or Luigi a suit if they touch this orange mushroom with propellers on top. These are common items and World 1’s main items as well. After collecting it, Mario or Luigi will wear an aviation suit.

Question Block
This is a recurring item in Mario series that when hit will release some item like coin or super mushroom, Mario can hit the mushroom with Koopa Troopa’s shell by jumping. In some games ground pounding on it will reveal the items as well. It is also used as a platform to go above.

Star Coin
These are the collectible items with larger than normal coin size and each level has three of them. 240 in total, and they can be used to open up the paths in world map and to buy Touch Screen Background images.

Super Guide
This is a block that appears in some of the Mario games like new super Mario bros, when you touch this block Luigi will guide you through the whole level.

Super Star
This is a very powerful item of the Mario games, they will grant Mario or any of his friends temporary invisibility. Keep in mind they will not protect the character from falling down the lava or a bottomless pit or even getting cursed.