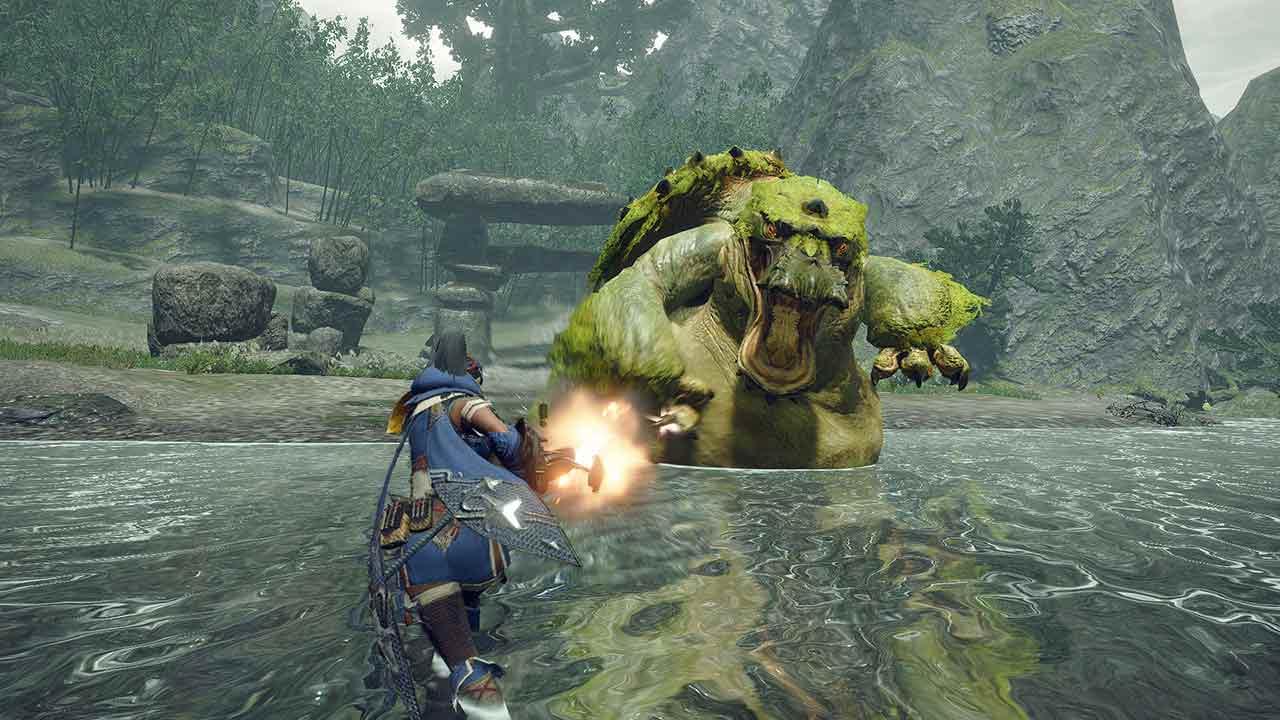 In this Monster Hunter Rise Hunting Horn guide, we will take a look at the new features added to the Hunting Horn and how these features can be used in MHR.

The Hunting Horn is a peculiar weapon. It is a musical instrument that you can play to hurt the monsters and possibly kill them.

Whenever you make an attack with this horn, it produces a musical note, and if you hit the right notes, it can buff up your teammates, including yourself, while dealing some serious damage to the monster.

The Hunting Horn was present in the previous parts as well, but the revamping of this weapon in Monster Hunter Rise has made it amazing.

Before dealing damage and generating buffs simultaneously was not an option but this time it is made possible, which converted this weapon from slow as a snail to the flash.

Below, we’ve listed down the basic attacks that you need to learn how to perform with the Hunting Horn. The table below shows the button mappings for both Switch and PC of these basic attacks.

To perform the best combos with the Hunting Horn, follow the control combinations listed below:

How to Use Hunting Horn Switch Skills

In Monster Hunter Rise, the unique attacks of each weapon have two different skills, named Switch Skills. These two skills perform completely different moves and inflict their own unique debuffs and effects on the target.

You can only have one Switch Skill active on an attack at a time. The Switch Skills of the Hunting Horn are listed below:

Slide Beat launches the player forward into a spin attack. This attack gives you a stat boost and makes you immune to knockback while you’re in motion.

Earthshaker fuses the Ironsilk with a blade and plunges it into a monster. After that, the horn emits sonic waves which directly hit the affected body part of the monster, inflicting more damage.

This Silkbind Attack is a Switch Skill that can be switched out with Earthshaker.

Bead of Resonance places a Wirebug cocoon on the ground which plays the same melodies that the Hunter plays using the horn, and also emits a sonic wave which deals damage to monsters nearby.

The melodies played by the cocoon also emit the same effects as the melodies coming from the horn.

This cocoon can be used to use the melody effects over a much longer distance, allowing you to help your team while staying away from immediate danger.

An attack used for folding you inside an Ironsilk. If there’s any attack caused, the Ironsilk will start vibrating and will deal damage through a delayed shockwave that it creates to trigger extra hits.

Since the Monster Hunter Rise 2.0 update, the melody system in the game has been changed. You can only play three notes in total with a single Hunting Horn.

The reason for this is to encourage players to create different Hunting Horn builds for different situations.

The melodies that you can play using the Hunting Horn are listed in the table below:

To make the most out of your Hunting Horn, you need to create the right build for it. Below, we’ve listed down the best Hunting Horn build for each quest level.

This Hunting Horn build will work perfectly for 2 Star Quests.

This Hunting Horn build will work perfectly for 4 Star Quests in MH Rise.

This Hunting Horn build for MH Rise will work perfectly for 5 Star Quests.

This Hunting Horn build will work perfectly for Endgame Quests.

MH Rise has a very large catalog of Hunting Horns for players to choose from. Each of these horns has its own unique pros and cons, making it difficult to pick out the best ones.

To help you out with finding out which Hunting Horns are the best, below we’ve listed down the top 5 best Hunting Horns in Monster Hunter Rise.

Since the Monster Hunter Rise 2.0 update, the Rampage Agitato V Hunting Horn has arguably become the best Hunting Horn in the game.

When evolved to its maximum potential, the Rampage Agitato V has an incredible raw damage output. The durability of the weapon is decent, but it can easily be improved using Sharpness Type I.

This will allow it to easily reach White Sharpness with Handicraft, which will then give it a massive damage boost.

Out of the four melody sets, the best one to use with Rampage Agitato V is Health Recovery (L). This melody will give you and your team instant healing, which you can synergize with Bead of Resonance to make your team practically unkillable; while also further increasing damage.

The next best Hunting Horn has to be the Hidden Harmonic II. This horn has White Sharpness by default, which is an incredible feature to have.

And as it is a Nargacuga weapon, it’ll have very high Affinity (40%) intrinsically. If you pair Maximum Might with the Stamina Recovery Up melody, you can maintain an extra 30% Affinity with the Hidden Harmonic II.

Another great thing about this weapon is its Attack Up and Affinity Up songs. These stat boots are now very scarce in the game, so they’re very useful to have.

This can come in super handy when you don’t have Bead of Resonance or access to any Wirebugs.

The Araknahorn has White Sharpness by default which can then be extended by Master’s Touch, Razor Sharp, Protective Polish or Handicraft. The raw damage of the Araknahorn is pretty underwhelming, but this horn is very effective against enemies that are weak to fire.

To boost its elemental damage further, you can use elemental decorations in its two level 1 slots and then use the level 2 slot for boosting raw damage.

One good feature about this horn is that it is a Rakna-Kadaki horn. This means that it is very easy to construct and is incredibly versatile, allowing players to use it for all kinds of playstyles.

Despite its low raw damage, these features of the horn still make it one of the best Hunting Horns in the game.

Finally, the fifth-best Hunting Horn in the game is the Sinister Shadestrum. This horn has some great stats and slots and also has an amazing signature Magnamalo Soul Skill that provides you with a crazy buff when you’re effected by Hellfireblight.

This skill then synergizes with the Resuscitate skill to deal very large bursts of damage. Another good feature about this horn is that it can get White Sharpness through Handicraft.

The only con of the Sinister Shadestrum is that it needs to have very intricate builds to reach its highest potential. If you enjoy diving deep into your builds and making them as perfect as possible, then this horn will work for you.

If you’re more casual with your build and don’t like spending great amounts of time perfecting builds, then you should go with the other options on this list.

In this section, we’ve listed down all of the Hunting Horns available under every tree node of MH Rise.

Although there are many benefits of hunting horn, there are some disadvantages as well. Let’s take a look: