Call of Duty: Modern Warfare will come with a new Pointman perk which changes killstreaks into scorestreaks, according to a new rumor. This rumor comes from notorious Call of Duty leaker known as TheGamingRevolution. 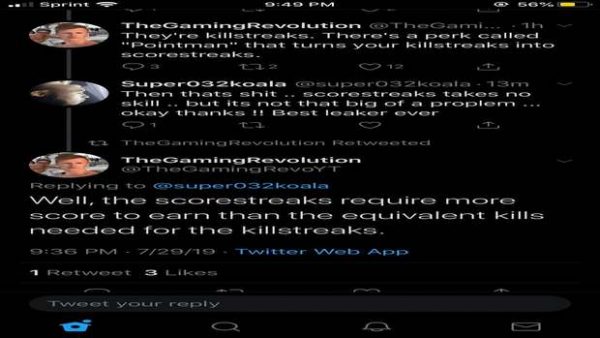 For those who don’t know, scorestreaks (featured in Black Ops 4) require you to achieve points by killing people or by completing objectives. It’s a much easier way to call in external support in the game. On the other hand, killstreaks simply depend on the number of kills that you can get in a single life, which is why it is something that newcomers struggle with.

If the rumor is true then it’s a great addition to the game by Infinity Ward. Call of Duty: Modern Warfare Pointman perk will come in handy for those players who like to complete objectives rather than camp to build killstreak.

In the end, both scorestreaks and killstreaks will be available so no one will find it hard to call in the new streaks coming to the game. Of course, it’s nothing but a rumor for now. It’s possible that Infinity Ward only brings scorestreaks or killstreaks to the upcoming game instead of both. To find out, we will have to wait.

There’s no official information regarding Call of Duty: Modern Warfare perks and killstreaks available yet. However, according to the aforementioned leaker, there will be a total of 16 perks in the upcoming game. The full list of Modern Warfare 2019 perks reported by the leaker is as follows.

With that said, we are hoping to learn more about Modern Warfare 2019 Perks, Killstreaks and scorestreaks next month. Infinity Ward has officially announced that the world reveal of the game’s multiplayer universe will be held on August 1.