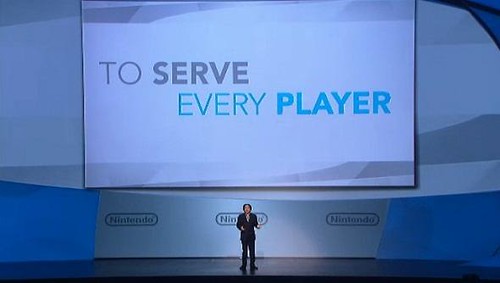 Nintendo’s new HD console marks company’s first attempt to cater to the more hardcore audience which has been greatly neglected with standard visual capabilities of the original Wii. While no one exactly know the capabilities of Wii U, everyone is hoping Nintendo will finally be able to compete with the likes of Xbox 360 and Playstation 3.

Speaking to 1up during an interview, Nintendo managing director, Shigeru Miyamoto laid down the challenges company faces with this new console and how they plan to cater to more hardcore audience with it providing more core games experiences blending with the casual games.

I think the reason some of those distinctions have come up have been different for each generation, going back and looking at the switch to disc-based media at a time when Nintendo felt it was important to stick with cartridge-based media to ensure load times were shorter despite the greater capacity of disc-based media.

That was the real reason, I think, some of that happened in that era. Then, of course, for Wii, we were developing in standard definition with a unique new motion controller versus the other systems running in high definition with more standard controls.

I think what we’re going to see with Wii U from the HD side — obviously, it will be an HD console with the capabilities that you’d expect from an HD console. You have, additionally, from a media standpoint, media that is capable of producing games that are going to be HD in content.

But on top of that, I think what you’ll find is that the addition of new screens means that developers who are making games for other systems will naturally be able to make them for Wii U, and then on top of that they’ll be able to take advantage of this new gameplay structure to bring new possibilities to their game designs when releasing them on Wii U.

So, I think you’ll find a blend of experiences on this system. Some of them will be based on the motion style of gameplay that we introduced with Wii, while others will be based on more traditional, core-type games.

When asked about whether Wii U with its hardware capabilities has put Nintendo on equal footing with its competitors, he replied:

Yes, we do feel that we’ve reached that,” he said. “Then it’s just a question of how much gamers understand the uniqueness that Nintendo offers.

For us, the ideal is that we’ve been making games for a long time, and we try to create these new styles of play become the future standard for video games. So it becomes then… you need to find the appropriate way to take advantage of new technology while offering it to people at an appropriate price that’s going to make them want to play.

Nintendo has still a long way to go. Will this classy touchscreen controller powered HD console be enough to compete with Xbox 360 and Playstation 3 ? not unless Nintendo announce a long list of hardcore exclusive games.

If this third party games line up is something to go by, they are atleast trying. What’s your opinion on this as a general all round gamer ?