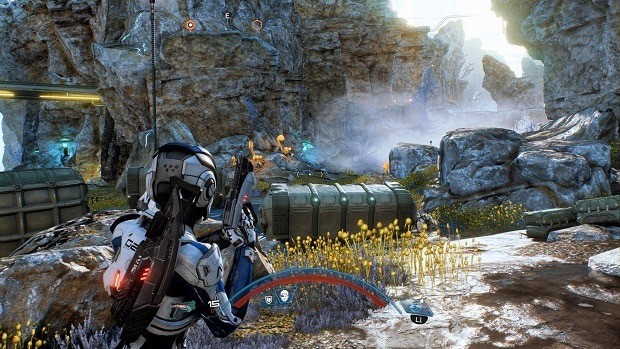 Our Mass Effect Andromeda Shock Treatment walkthrough will lead players through this side quest to rescue the work crew and defeat Remnant enemies.

Journeying through the planets in Mass Effect Andromeda, players will come up on numerous side quests including one in Prodromos, the first settlement which the players reach after getting Tempest. While scanning, players will start a mission called Shock Treatment.

To start off, players will need to begin the mission from the terminal inside the second building, behind where the Tempest lands in Prodromos.

After starting the mission, they will need to find the roster of workers which can be collected from a datapad which appears on the player’s compass. Simply following the orange marker on the compass should lead to the objective.

Next up is reaching the medbay and once again the compass will guide the players. Inside the medbay, players can talk to Dr. Ramirez and then scan the terminal in front of him to proceed with the quest. After scanning the terminal, Ryder will need to investigate a monolith site.

Once players reach the monolith site, they need to scan the communications array left behind by the workers who left the equipment behind. As soon as players scan the array, the next objective to rescue the work crew will begin alongside a timer. Players will have less than two minutes to travel to where the rescue crew is and then save them.

This is where the Nomad comes in as the worker crew is actually far off in the east and the best way to get there in time is to drive. The area is pretty open so players don’t have to worry about navigating around mountains and can simply charge ahead in the Nomad.

Upon reaching the objective marker, players will need to defeat the Remnant bots that are attacking the work crew. The crew accidently ended up bringing these dead robots to life and now it is up to the players to destroy the robots again. Once all the enemies are dead, players can talk to the work crew to complete the Shock Treatment mission and gain 29 Andromeda Viability Points.

This is all we currently have on Mass Effect Andromeda Shock Treatment Walkthrough but if you would like to add more, share in the comments below.