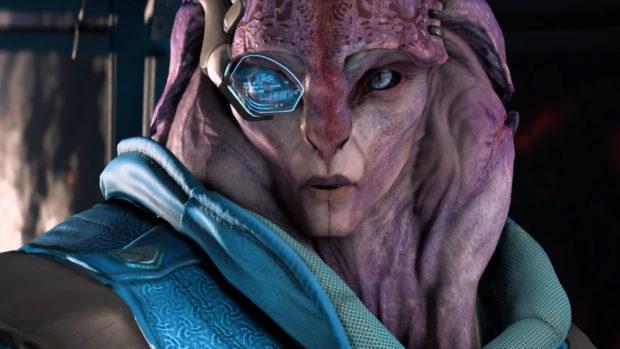 Mass Effect Andromeda A Trail of Hope Mission Guide will help you through the mission and guide you on how to get to the next vault and how to recruit Jaal.

A Trail of Hope Mission Guide will take you to Aya planet and to continue with the mission a couple of side quests are required to be completed. The mission will also take you to a treacherous snowy planet where you will face off against a lot of Kett enemies.

The data you found on the EOS in the Remnant Vault will lead you to the Onaon System. A Trail of Hope Mission will see you take on some challenging foes.

After the successful mission on EOS Ryder will have to carry on the good work. Ryder has found a lead in the Remnant Vault that suggests that there is another vault in the Onaon System.

Recruit Jaal
Go to the tempest and open up the Galaxy Map and find the A Trail of Hope mission marker. As you target the right system and the planet a cutscene will play with the main villain.

Eventually, you will outrun the Kett and will be escorted down to the planet Aya’s surface. Then you will have to follow Paaran Shie to the Angaran Resistance headquarters.

Once at the headquarters speak with Evfra. Here you will meet the Jaal who is potentially your future squadmate. Evfra will confirm that there is a vault on Aya, but the entrance to it has been lost and the only person who knows where it is has been kidnapped by Kett.

A few More conversation choices and Jaal will be on your team and now you have to go back to the Tempest to continue the mission. Open up the Galaxy map, however, to continue The Trial of Hope Mission in Mass Effect Andromeda you will have to gain the trust of angara.

Helping Havarl’s Scientists
This mission is fairly simple, some scientists have got caught up in a bit of trouble and you have to get them out of it.

Once you have landed on Havarl, head straight to the research center directly down the path in front of you. Go inside and talk to Kiiran Dals, the lead scientist at Daar Palaav. Agree to help him and be on your way.

Make your way to the mission marker and on your way, you will come up against a couple of beasts and raiders so take them out and carry one to the marker.

The Havarl Remnant Puzzle
Go to the monolith area and clear the area of enemies. Once clear walk up the ramps on the other side. There will be some researchers trapped inside a stasis field. Interact with the console nearby and a puzzle will pop up for you to solve.

Scan the area for the mission glyphs, there will be two of them nearby. Solve the puzzle and the scientists will be free from the stasis. Now head back to Dals in the research center, talk to her and complete the Havarl Scientists mission.

It is time to talk to Evfra, head to the tempest and use the vidcon terminal in the Tempest’s meeting room to call Evfra. Evfra will ask you to meet the resistance on Voeld in the Nol System. So, go the Galaxy Map and head to Voeld.

Voeld is a dangerous snow covered planet and your life support will not help for long if you stay in the open. Talk to the team and agree to go out to complete the mission and you will take a short trip to a new location. You will find a terminal, interact with it to hack the system.

A small path will open, some dogs will attack defeat them and destroy what is blocking your path. You will come to a room filled with Kett.

Take them out and talk to Commander Heckt and then split up. the path ahead is straight keep going until you reach a room with a handful of Kett. Kill the Kett and activate the console a small conversation with Jall will take place.

Head through the door to the left of the console and interact with the terminal beneath the hologram of the Archon. Head to the opposite side of the room and go through the door. Take the left and walk along the force field covering the floor.

Head straight down and a battle with Kett will take place. Once they are defeated, head left and go straight to the end of the path. There will be another vent blocking your way, destroy it and go ahead. You have to find the Moshae, so take out your scanner and get to work.

You will not find her in the pods so interact with the console and SAM will perform a scan. The force field blocking the door will be disabled, so go through it.

You will face more enemies ahead so take them out and talk to Jaal. Follow the mission marker and you will be lead to another fight. Just go straight to the lift to further proceed.

Save Moshae
As you progress you will come up against the Kett Cardinal and his minions and it is not going to be an easy fight. Cardinal has a shield that is powered by an orb that circles him. Shoot down the orb and try to take him out quickly before he deploys another one. Repeat it until you have defeated him.

Don’t let the Cardinal get too close as it will result in instant death. Eventually, the Cardinal will fall anf go to the Moshae and talk to her. Here you will have to make a choice so choose wisely. Stay close to Moshae and protect her from the giant rock beasts.

Just hold on long enough and a ship will arrive and you will be off the Kett facility. back at the Tempest go and talk to Moshae. Convince her to find the vault and go back to Aya.

Once you land a series of events will take place and then Moshae will take you to the vault. Once you are on the shuttle a cutscene will trigger and at the vault, a brief conversation will tale place and you will be back in the city. Head back to Evfra’s office in resistance HQ and A Trail of Hope Mission is completed.

That is all for our Mass Effect Andromeda A Trail of Hope Mission Guide with tips on how to recruit Jaal and how to complete the mission.