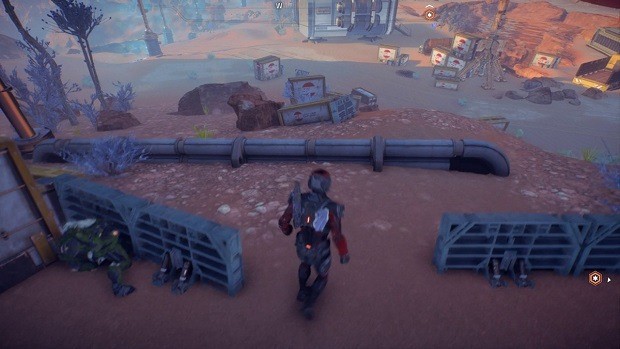 In our Mass Effect Andromeda Defeating the Kett Quest Guide, we’ve detailed everything you need to know about completing this quest with our easy-to-follow walkthrough tips.

To unlock Defeating the Kett mission, you need to land on Eos and be in the range of the Kett base. Alternatively, you can simply defeat the Kett at Site #1. Since the battle is tough, you should consider leveling up before attempting it.

For more help on Mass Effect Andromeda, check out our Dissention in the Ranks Guide, Vetra Nyx Loyalty Mission Guide, and Armor Guide.

From the front door, try to get rid of the turrets before dealing with the Kett. Once done, head to the left side and hack the locked door. At this point, you must hold the reinforcements using a number of crates and ammunition boxes around the area.

After you’re done, defeat some more Kett and use the console on the lower-level platform in order to cause the generator to overload.

As an optional objective, sabotage the two generators along with defeating Kett.

Once you’re done with the generators, head over to the top platform near the entrance and deactivate the console.

Cross the central platform and defeat the Destined & Anointed followed by heading into the main facility. Once inside the base, defeat the enemies and follow the navpoint to the top floor.

Once you’re down, defeat the enemies and head to the command center in order to eliminate the Invictor. Once done, clear the remaining enemies and use the console in the middle of the lower floor to head to the zenith observation room.

After you’re there, raid all the containers and scan the Kett core encryption tech followed by turning the base offline to complete the mission.